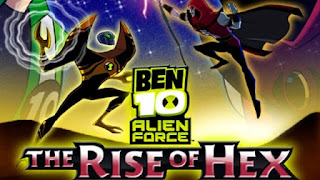 Ben 10 was always a concept I liked, but thought would work even better as a video game.  While looking through my backlog of games to play, I finally set on trying out Ben 10 Alien Force: The Rise of Hex, which I had acquired years ago.

Being a downloadable TV show tie-in game, I have to admit my expectations were lowered.  The game is a fairly simple action-platformer, where you can change into various alien forms as you unlock them.  Ben has health denoted by green bars at the top of the screen, and energy denoted by yellow bars underneath that.  Pressing the right trigger will bring up the wheel that shows your alien forms, and allows you to choose one.  Each alien has special abilities.  Unfortunately, they seem mapped to either the Y Button, B Button, or Right Bumper.  Sometimes you can use more than one of the buttons for different abilities.  It's kind of a mess.

The game starts off fairly easy, but definitely gets harder as you go.  Most of the difficulty is the spotty hit detection, clunky combat and inaccurate platforming.  Yes, that is pretty much most of the game.  Invincibility time after taking damage seems short, and there are times when I'm not even sure the enemy is taking damage, even if it looks like they might be.  It's also way too easy for enemies with projectiles to hit you because Ben's hit box is bigger than each of his forms.  It does change based off the form, which is at least a plus.

It just feels like a lot of the difficulty is just the cheap damage.  Ben has no real defensive moves, so you are stuck killing an enemy in your way, or trying to avoid them.  You will get damaged by even touching an enemy, as if the game was made back in the 80s, which makes running around them less appealing than it should be.  Many times there were instances where it felt like the game was requiring me to take damage to proceed.

Jumping from platform to platform was also hit or miss, as many times throughout the game I would attempt jumps that the game needs you to make, only to have them not work over half the time.  I imagine most of these instances again stem from the larger than the model hitboxes getting stuck on parts of the environment.  Many of these areas also had instant death pits or spikes just for good measure.  Oh, did I mention that there are some spikes that are instant death and some that just damage you?  Yup, consistency is definitely not an alien Ben can use.

There are 15 stages in the game, plus three boss fights.  Each stage lasts from about 5 to 15 minutes.  It is possible to take some extra time if you get stuck in a stage, which admittedly happened to me once or twice.  Dying on a non-boss stage sends you back a bit, so it's more an inconvenience than a punishment.  This actually helps balance out the bad aspects of the game, so I'm okay with it.  The boss fights are probably the hardest parts of the game, since you have to do them all in one go.  Figuring out exactly what to do is more annoying that it would seem, and can easily cause you a few extra attempts to figure out what silly thing the game isn't communicating to you.

Besides the main game, there is a survival mode and a time attack mode.  Survival pits you against endless enemies to see how long you can last.  Harder enemies spawn the longer you last, but there is only one stage for it.  It also has instant death pits, which feels counter-intuitive to the survival idea.  It's an okay addition, but doesn't offer more than a few minutes of extra content.  The time attack mode is just the story mode again, but you can post your completion times to the leaderboard.  Again, not really substantial content.  The biggest reason to replay the game or the other modes is to get the game's achievements, which of course varies in importance person to person.

I still think the concept of Ben 10 would make a great game.  The Rise of Hex just isn't it.  Sure, I could cut it some slack since it is a licensed downloadable game, but much of the core elements of the game just don't work right, which is a big negative to any game.  It might appeal to fans of the show, but I imagine that it might be too hard for some younger fans.  I wouldn't recommend this for people like me that haven't really seen the show, as it will probably give you a bad impression of it.  Maybe it's for the best that the game was de-listed from the Xbox Marketplace.


The Good:
Solving some puzzles by switching alien forms quickly (or mid-air) is pretty cool.

The Bad:
Wonky hit detection and combat, plus the platforming doesn't always seem to work.

The SaHD:
I think having more than 3 songs in the entire game would have been a step in the right direction.


(Ben 10 Alien Force: The Rise of Hex was obtained for free on the Xbox Marketplace.  It has since been delisted)
Posted by The SAHD Gamer at 10:55:00 PM