Shiren The Wanderer: The Tower of Fortune and the Dice of Fate (PS Vita) Review

Shiren The Wanderer: The Tower of Fortune and the Dice of Fate is a mystery dungeon style game, and also a game with a very long title.  To change a sick woman's fate, Shiren must brave the three towers and retrieve the magical dice of Reeva, the god of fate.

For those not in the know, mystery dungeon games have many similarities to each other.  Their dungeons are multi-floored, and every floor is randomly generated each time you enter it.  Placement of items and enemies is also randomized, and what appears is random within a range.  If you die...sorry, when you die, you lose everything you have on you and are kicked back to the town.  Every time you enter a dungeon, your level is reset to 1.  You will automatically heal while moving around the dungeon, but only if you have some of your fullness meter.  It sounds a lot more complicated than is, but these are the basic tenets of the genre.

Shiren does up the ante by adding a lot of unique mechanics.  Well, at least I haven't seen them before in the mystery dungeon games I've played.  It adds so many little things that they have tutorials dedicated to all of them...seriously, all 9 or so pages of them.  In a nice twist, you will actually experience the tutorials, not just read about them, but they keep adding more.  Some of them would have been better as just a note, or text, instead of having to do a simple dungeon to illustrate them.  These tutorials open up well before you encounter them, so you have plenty of time to forget about them.

Most of the unique mechanics are pains in the butt for the player, with my least favorite being night.  Monsters get stronger, and you can barely see where you are going.  To compensate, you get skills that can only be used at night, but I'd rather it just not be in the game.  Sure, it is one of many on the list of mechanics that don't need to be here, so maybe it's just the metaphorical straw.

Thankfully, Shiren can have others follow him into dungeons on his journey.  Some are free, some are random, and some are actually useful.  They aren't the smartest bunch of NPCs, but they can be decent shields and extra attacks if positioned properly.  The only real downside to them (besides the ones that cost money, or leave randomly) is when an enemy actually manages to kill one.  This will almost certainly level the enemy enough to evolve into a stronger form, which will then almost certainly kill you.  Thanks, game.

Before Shiren can make his way through one of the towers to retrieve a Die of Fate, you have to do a 5 floor dungeon.  Every.  Time.  The towers have a recommended order, and each subsequent one adds a floor or two to the top.  After getting all three dice, you then go to another town, and have to continue through to another dungeon.  Guess what happens if you fall in there?  Yup, back to the first town, and through the 5 floor dungeon, the tower you last beat, and then to the dungeon again.  I don't know why they can't just let you warp to the town you made it to, or allow you to skip the first dungeon after completion, but they don't. 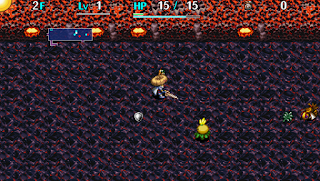 Maybe it's to keep your level high enough to survive the other dungeons?  That could work, but enemy damage jumps up every other floor regardless, lessening the impact you get from grinding.  Well, as much grinding as you can do.  They actually built a mechanic into the game that will make you auto fail a dungeon if you take too long on a floor.  So, you have to rush through, but take your time.  It just doesn't make sense.

Most of my gripes come down to the fact that the game is mean.  You are punished for not grinding and punished for grinding.  You are punished for the random number generator not going in your favor.  Oh, did you have items kept in that pot?  Too bad, this enemy just threw dirt into it and destroyed them.  Is that a good sword?  Too bad, you stepped on a trap that made it weaker.  Did you lose your strong sword but it was tagged?  Then go through 15 floors to find it again!  Since the game saves a lot without telling you when, it is a pain to save scum by using the cloud.  Making it through Shiren takes more luck than skill, which is something I don't like.

I should mention that there is a way to keep your stuff if you fail...but you have to be rescued.  You can only do it so many times, and you will have to wait for another person (nearby or over the internet) to actually come and rescue you.  It would be great if it didn't result in just sitting around for an hour or so waiting for someone to show up.  Maybe if they sold a million copies it would be feasible, but it's not a feature I got to experience.  There's also some versus multiplayer and co-op, but again, I don't know anyone with the game to be able to try them out, and I did sit around hoping for some random people to no avail.  At least the game has the option, even if less than 10% of players (my estimate) will actually be able to use it...

While it can take anywhere from a few hours to a lifetime to make it through all the normal dungeons, Shiren does throw some nice extra ones at you as well.  First is the two puzzle-like dungeons, Statue Cave and Explosive Rocks.  Statue Cave is moving around statues to their proper location, like a block-sliding puzzle.  There are many different stages of it, and each gives you a reward when you complete it.  Explosive Rocks is the mystery dungeon equivalent of Minesweeper.  So, if you actually like that game, you will probably like it here.  At least it is a decent way to get some items if/when you run out trying to get through the story.  Besides those, there are a host of other challenge dungeons that each have one or more unique quirks about them.  I'll definitely give the game props for having a variety of dungeons to delve through.

Overall, Shiren the Wanderer: The Tower of Fortune and the Dice of Fate is a tried and true mystery dungeon game.  For better or worse, it clings to the established formula, and doesn't offer any real modern amenities to help the player through the game.  While it does offer some other content, the game is just too unforgiving and mean for me.  Other games in the same genre are much more fun, while still being hard and unforgiving, leaving Shiren feeling too old-school and random.  Having some reliable method of actually getting stronger for harder dungeons, or not having to make your way through past dungeons to get back to where you fell would be leaps in the right direction.  As it stands, it is hard to recommend over previous mystery dungeon offerings on the Vita.  However, if you like this style of game, and are itching for a challenge against the RNG, then by all means dive in.


The Good:
The sprite artwork is really cool, and the extra puzzle and challenge dungeons are a nice touch.

The Bad:
As a normally unlucky person, I do not like leaving my progress to a RNG instead of player ability, learning and knowledge.

The SaHD:
Probably the only reason I got as far as I did is because I met a shape-shifting companion that would join me for free early on.  She's the best!

(Review code for Shiren the Wanderer was provided by the publisher)
Posted by The SAHD Gamer at 1:01:00 PM