The first Danganronpa was easily one of the best games I played when it was localized in 2014.  Crazy to think that was three years ago!  The story was a great murder-mystery filled with twists and turns that lead to a satisfying conclusion.  The sequel wasn't quite as good, with better characters but a slightly weaker story.  That's of course up to my personal tastes, but most people agree the trial mini-games weren't as good either.  Even though I know the story, I was very eager to try out the PS4 release of Danganronpa 1&2 Reload, and maybe even get my wife into the story this time as well.

The basic premise for both games is similar: you are one of a group of students at Hope's Peak Academy, a school filled with people that are the best in their field.  However, you quickly become trapped and forced to play a game where the only way to escape is to kill another student...and get away with it.  Once the deed is done, you must gather evidence and figure out who the murderer is, so that the rest may survive.  Maybe you can even uncover who or what is behind this sick game, and put a stop to it.

The first part of each chapter is a lot of dialogue as the students interact with each other, and try to find any escape.  Eventually, someone will be killed, and then you enter the next portion where you have to investigate the crime scene and talk to other students.  Third is the trial, where you must figure out "whodunnit", and also prove it.  When all is said and done, someone else will die, and it is your job to make sure it is only the guilty party.  Then, the story moves to the next chapter until you finally confront the mastermind behind each incident.  I don't want to spoil any more than that, but I did enjoy the stories.  More so the first game, as there were a few plot points in the second that I didn't agree with.

To make the game seem less like a visual novel and more like a game, each trial contains several minigames.  For starters, you don't just refute statements, you use your evidence as "truth bullets" and fire them at the incorrect dialogue.  The possibilities are highlighted, so even if you aren't sure, it is less guesswork than, say, Phoenix Wright can be.  As you go through the game, there are more truth bullets loaded, and you have to figure out which to use.  Plus, sometimes you have to 'capture' a statement and use it as a truth bullet.  It takes some getting used to, but there is a difficulty setting to try and help you out if it's too much.  My wife wasn't very keen on this system, but I was fine with it.

Another of the trial minigames is Hangman's Gambit, where you have to hit letters to spell out a word.  This works ok, but like most of the minigames, feels unnecessary.  The second game has Improved Hangman's Gambit, which is anything but.  You have to make matching letters touch and combine, which then allows you to use them in the word.  Order matters!  If they touch another letter, or sit around too long, they explode and damage you.  It spawns them randomly, making it possibly longer and much harder to not take damage.  I'm fine taking damage if it's my fault and not because of poor design. 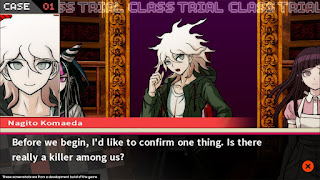 Danganronpa 2 also adds Logic Dive, where you must slide down tubes to figure out a chain of thought.  Again, unnecessary.  It also adds the "rebuttal showdown" where instead of shooting, you must cut down your opponent's arguments by using the left stick to slash the statements.  This is a bit of a headache, since you have to do it quickly and if you mess up and hit the wrong statement, you have to do that section over.

The last of the trial minigames are the finales of each one, where you place scenes of the murder together in a comic/manga format.  It's a really cool idea, but sadly isn't perfect.  In the first game, the scenes you insert aren't always obvious, which can lead to errors.  In the second game, it was actually improved.  There are hints to the missing scenes, and you get a brief description of your pieces when you highlight them.  Plus, it tells you instantly if it's correct or not.  You also have less possible pieces at a time, which should make it easier.

Since you could control much of the game with the Vita's touch screen, I wasn't sure how those parts would translate to the PS4.  Then I remembered that the first ones were PSP titles, so the touch screen functionality had to be added, and should be just as easily removed.  Then I also remembered that most parts controlled better with the sticks and buttons, so I figured I wouldn't even notice.  Happily, the game controls just fine on the PS4, and looks a lot better to boot.

Each game's main plot and extra post-game stuff ran me over 40 hours.  In that respect, having both in one package easily makes it worth the price of admission.  As previously mentioned, there are unlockable modes once you complete the main story.  They are a fun diversion, but mostly add up to being able to clean up trophies, unlock skills for use in the trials, and to befriend the other inhabitants of Hope's Peak Academy.  The second game also has another unlockable game featuring Usami.  It's...ok, but make sure to read the controls so you can figure out how to actually plat it.  Other than that, there's not much replay value to the main games, but it is worth playing them through the first time.

So, should you buy this edition?  If you don't have the games on the Vita, and enjoy a good story, then I would recommend it.  You get two games and they look and play great on the PS4.  If you already own them on the Vita, it's a little harder to recommend.  Sure the story is great, but there isn't really much replay other than experiencing the story again.  Plus, the minigames can be hit or miss, and largely feel unnecessary.  At least there is a different, remixed trophy list if that appeals to you.  Even so, I would recommend Danganronpa 1&2 Reload for anybody interested.


The Good:
Some great murder mysteries and characters spanning both games, now in one package.

The Bad:
The Trial minigames can be make or break for some players.

The SaHD:
For the parts my wife played, it was really hard not to yell out spoilers, but thankfully I'm not that much of a jerk.

(Review code for Danganronpa 1&2 Reload was provided by the publisher)
Posted by The SAHD Gamer at 1:44:00 PM