Contrary to its same-day released brethren (or is it sistren?), Touhou Double Focus is an action/adventure metroidvania game staring Aya (the reporter Tengu and my personal arch-nemesis in the fighting game) and Momiji (a wolf spirit).  In it, you can freely switch between both characters, each with their own attacks and skills.   Momiji has a close range sword and a defensive shield while Aya is ranged and relies on mobility to avoid attacks.

The X Button is always set to jump, but the other three face buttons can be set to any of the skills you have unlocked for the character, and three different sets of those that you can swap between.  This is pretty neat, so you can make a normal set, a boss set and an exploration set, or any other configurations.  The only part I don't like is you have to set the passive skills on these to actually get any benefit from them.  I might be able to adjust to something like that, but the game doesn't even tell you that's how it works.  I mean, why would I equip a passive skill in an active slot?  That doesn't make much sense.  It would have been nice to get a passive slot or something (how about on the X Button since it already has an active use?)

Each attack or skill you use takes stamina, which is the bar below your health.  Some of these have a charge time (like the heal), which is both good (harder to accidentally use) and bad (might want to use them quickly).  While it is unfortunate that you can't spam attacks, at least stamina refills pretty quickly to make it less of an issue.  I only really had problems after blocking a boss' attack, since that will drain stamina something fierce.

Speaking of bosses, they are a huge pain in the butt when you first encounter them.  The health system is already a bit wonky, and the bosses point that out with authority.  Hit detection is spotty, both for getting hit and for platforms and jumping.  Not a good combination.  Hits can do a lot of damage, especially early on, and there is little to no invincibility time after getting hit.  An even worse combination.  Bosses hit even harder, and tend to cover very large areas with their attacks.  It's all about pattern recognition and patience.  Or just retrying constantly until you succeed.

Oh, and while there are two characters, the health bars are separate, but connected.  Damage drains towards the center, but going over won't kill that character or switch you to the other.  Instead, you take double damage.  Again, the game doesn't tell you this, you just have to find it out on your own after dying super quickly and wondering why. 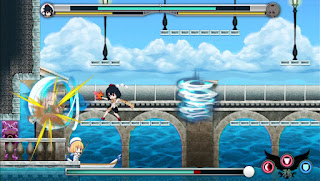 As you move around the map, you get a few exploration skills that help open up new areas.  I appreciate that they are fairly unique (you don't get a double jump, but something else that lets you go up high), but I have a problem with the default ones the characters get.  Aya can hover in place in the air and Momiji can run up walls.  Sounds great, right?  Yeah, except- surprise, surprise- the game doesn't tell you that.  I got to a point where I couldn't go any further and was confused as to what to do.  I was stuck.  Turns out that I could run up the wall, but I had no idea that was even a function in the game.  If you are wondering why I never ran into a wall to accidentally trigger it, it's because Aya is so much better at normal fights and traversing the areas.  Momiji gets her turn to shine in the boss fights though, as blocking is vital to success.

A really cool idea the game has is letting you create your own warp portals.  There are several books that let you create a warp portal in just about any spot you choose.  Trouble is, they can't be reused or reset, and you don't know how many you have to work with initially.  Still, I tried to be somewhat conservative with them and I never ran out.  I ended up with several left over after finding all the items in the game.  You can also designate which one you will warp to, and holding up while standing at the portal will always return you to the home base.  A nice system, even if not perfect.

Double Focus only takes a few hours to beat.  Of course, it will take you a bit more than the game clock says, simply because you will die a fair amount, which sets you back to the last time you saved at the home base.  There's also a speedrun mode, and a trophy claiming you can beat the game in under an hour.  You also get three difficulty settings.  Note that Easy isn't easy at all.

Touhou Double Focus is at its most fun when you are making your way through the rooms, finding items along the way.  Unfortunately, it can get annoying very fast, which mars the overall experience.  It's also a bit short.  Touhou fans will likely be the most happy with the game, since they would know most of the characters.  Metroidvania fans might find a quick diversion, but it's definitely not the best offering in the genre on the PS4 or Vita.


The Good:
Good customization of the skills, being able to set your own warp points.

The Bad:
Taking damage and of course, the boss fights (did I mention that enough?)

The SaHD:
I would be very happy to see a refined and expanded sequel, since the game does have some good ideas and promise.

(Review code for Touhou Double Focus was provided by the publisher)
Posted by The SAHD Gamer at 1:44:00 PM