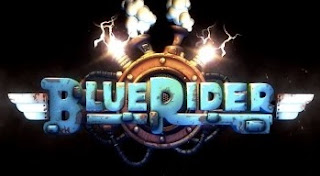 I'm not sure how Blue Rider passed under my radar when it was release late last year.  I check the new releases weekly, and at least look at anything that I don't recognize the name of.  It's also a shmup, so I doubly don't know how I missed it.  That's why I jumped at the chance to review it when given an opportunity.

As opposed to a more traditional shmup, which is either horizontal or vertical scrolling, Blue Rider feels like it was mixed with a twin-stick shooter.  The right stick doesn't aim your shots directly, as it will rotate the screen so you can shoot enemies.  Your ship is always facing the same direction on the screen.  You move yourself through the areas, so there is no auto-scrolling.  Unfortunately, there is momentum to your ship, so it moves a bit farther when you stop pressing the right stick.  Kind of like Asteroids.  In fact, the game feels like Asteroids, but you rotate the screen around instead of your ship.

The spin the screen mechanic isn't too bad, but it did take me awhile to get used to it.  I'm not that great at aiming in twin-stick shooters, and that translated over to Blue Rider.  There are times when bullets come at you from lots of angles, and turning to deal with them and enemies can be a bit much.  I wouldn't say bad, but definitely takes a different skill set than bullet dodging in traditional shmups.

However, the floaty mechanic is the part that I really don't like.  I didn't like it in Asteroids (and everywhere else it reared its ugly head), and I don't like it here.  Such an imprecise system doesn't belong in a shmup, simply because those games demand precision.  It's a system that just goes against the basic principles of the genre.  At least the developers seemed to realize that and tried to help out by giving some space between bullets.  Well, from one target at least.  If you have multiple sources shooting at you, it's no help at all.  At least the hit detection seems precise.

As far as I can tell, there are two different shot types and two different bomb types.  At a few places in each level there are structures that give power-ups when defeated.  If you grab the power-up color that is the same as your shot, it will be powered up one level, and get stronger/bigger.  If you grab the other color, it will switch your weapon.  There's a spread and a laser, and I far prefer the spread (because my twin-stick accuracy sucks).  The two types of bombs are a multi-firing homing barrage and a stronger single fire.  I think the single fire is better, but I would still far prefer the traditional screen clearing blast to the weak offerings the game presents.  They do more damage than the shots, but just don't seem very useful.

You can also find small ships that will shoot at enemies for you, but they don't stay close and don't last very long.  It would have been nice to get actual Options, but alas, it is not to be.  There are also a few relics hidden in each stage, which will give you extra points if found.  The score multiplier in Blue Rider is called "berserk" and will fill as you fight/kill enemies.  If you go too long without fighting, it will drop back down to the base level.  One of the loading screen tips says you can get extra ships if you get a high enough score, but I'm obviously not good enough to do it.

There are 9 levels to complete if you are good enough or tenacious enough.  I couldn't make it that far, but it's nice that you can at least start over on any stage you have reached.  Thankfully they will start you with a slightly upgraded shot.  There is no difficulty options, or really any other options for that matter, and the only help you get is a list of the controls.  Yes, you can figure out several things pretty quickly, but not arming your player with basic knowledge feels like it is just there to pad the playtime.

Overall, Blue Rider is a unique shmup, but not one I liked that much.  The twin-stick shooting-like aspect isn't my preference, but it's really the drifting/momentum that ruins it for me.  While the game might be worth trying out for shmup fans due to its unique nature, there are far better offerings on the PS4 to scratch your bullet-dodging itch.

The Good:
An interesting and unique take on the shmup genre.

The Bad:
If you couldn't tell from the review, the floaty nature of the ship controls.

The SaHD:
The game feels pretty bare bones, but that makes sense for the price.

(Review code for Blue Rider was provided by the publisher)
Posted by The SAHD Gamer at 2:34:00 PM