Following in the heels of its...sequel, the first Darksiders game comes to the current generation of consoles in this port remaster.  I'm not sure why the first game was remastered second, but like its brethren, it boasts graphical and lighting upgrades.  It also has a super smooth frame rate, for better or worse.

Unlike the sequel, the first Darksiders is pure action and adventure.  You attack with War's really cool sword, named Chaoseater, using the X Button.  He can continuously chain his attacks together, and also use several purchasable upgraded skills.  The Y Button attacks with War's sub-weapon, either a scythe or gauntlets.  War can block some attacks, but also parry and counter them if you block at the right time.  This is really useful, since the game is pretty generous with the timing.  It helps add extra damage to tough foes while conserving your health.

You can also buy, upgrade, and equip 4 special attacks that take Wrath (the yellow energy under your health).  These are actually pretty useful.  There are other special attacks you can buy and upgrade, but are used with special input commands.  Not fireball motions, but things like targeting an enemy and holding back from him while attacking, or holding the attack button in the air.  It's best to try them all out to see what works with your tactics, but I ended up not using very many of them, and used my souls to buy things that I deemed more important.

On his quest for redemption, War agrees to help defeat the Destroyer, a malevolent being of immense power that probably doesn't play well with others, based on its name.  To do so, he must first find and slay its strongest minions and give their hearts to the one who would show War the way into the Destroyer's black citadel.  Each minion is holed up in a different dungeon.  Inside these dungeons, there are special items and weapons that will not only help you defeat them, but also give you new ways to traverse the environment and collect treasures.  If that formula sounds familiar, it's because it is very reminiscent of the Legend of Zelda.  Even so, it is definitely "inspired by" and not a direct copy, as the games feel very different.  War can even ride his horse in many of the open areas, and teleport from shop to shop, so you aren't stuck walking everywhere. 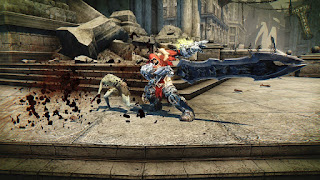 Since this is an action/adventure game, if there are any hard parts, you just have to get better at the game.  Grinding won't do much for you.  Even so, the game is perfectly complete-able on the Easy and Normal setting, although Hard gave me a lot of trouble back when I played the original.  Beating bosses and other difficult enemies is all about reading patterns and using the right tool or attack.  The game has several dungeons, and runs about 15-20 hours depending on how much extra treasure you want to find.  While there is no real new game plus, you can keep the abyssal armor if you manage to find all 10 pieces, which makes the harder difficulties much more manageable.  Achievements and trophies are the same as they were for the original release, so if you got them there, you can do it again.

As mentioned at the start, the game looks really good.  The graphics and frame rate are smooth, and the lighting looks natural.  Besides the too smooth graphics when rotating the camera, I have two other problems with this remaster.  First, explosion sounds don't always play when they should.  If you are right next to them, they make noise, but being a bit away from them (which you really should do for explosions) makes no sound.  Another thing that cropped up was random graphic effects just appearing on the screen.  Stuff like lava bursts and the energy the swirls around the flight orbs would just appear at random places of the screen sometimes.  I'm not sure what it was tied to, but it would go away after closing out the game.  It's not a big deal, as it didn't impede gameplay, but it was noticeable.

I enjoyed playing both Darksiders games, even with the differences between them.  Small annoyances aside, this is the best version of the first game, and well worth playing for action/adventure fans, especially if you like visceral combat and light puzzle solving.  Upon release several years ago, the original was likened to God of War crossed with Legend of Zelda, which is accurate, but I enjoyed Darksiders more than either of those.  If you skipped it last generation, then I recommend playing the game.  However, if you already have completed it, the Warmastered Edition doesn't add anything new except a very pretty coat of paint.

The Good:
The best looking and running version of a good and fun action/adventure game.

The Bad:
A few odd graphic and sound glitches.

The SaHD:
The dungeon with the Portal-like gun gives me a headache.  Hopefully, this and Darksiders II Deathinitive Edition sold well enough to justify a third game.  I want to continue the story of the Horsemen!

(Review code for Darksiders: Warmastered Edition was provided by the publisher)
Posted by The SAHD Gamer at 1:52:00 PM