Shmups!  I love to play them, and we don't get near enough of them in the US.  DoDonPachi Resurrection was one of those that was released for a home console (Xbox 360), but not in the US.  Therefore, I was happy to jump at the chance to play and review the PC port of the game.

Strangely, the system message are set to Japanese when I first loaded the game.  Thankfully the menu was in English, so I was able to change that quickly.  You are also greeted with a multitude of game types.  There is Ver 1.5, which seems to be the core game.  Next is Ver 1.51, which has some slight changes, plus you can get crazy points, but no achievements, sadly.  Then there is Arrange B, which is like a score attack for a stage, and Arrange L, which doesn't have bombs or allow you to pick a ship, but you can change the position of your options (little satellites that shoot with you).  Too bad this is the only mode that allows you to switch option positions, since I don't like the ship you are stuck with, but really like the position switching mechanic.

Next are the three Black Label choices.  The one just called Black Label is a harder version of the core game, where enemies shoot many more bullets.  Novice is an easier version, and Arrange is, well, slightly arranged.  Also, Arrange doesn't allow you to choose a ship, but instead gives you a unique one to use.  Too bad it's only used in this mode, since I really like this ship.  Besides those, you can do Score Attack or Training versions of any of the aforementioned modes. 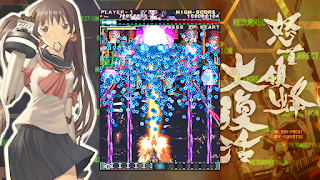 Like most bullet-hell shmups, you move your ship around and shoot at lots of enemy crafts while dodging a ton of bullets.  In DoDonPachi Resurrection, tapping the shoot button will fire your shots in more of a spread pattern, perfect for large waves of weak fighters.  If you hold the button down, it concentrates your fire into a narrow laser.  This is much stronger than the normal shot, but more focused, ideal for bosses and other tough enemies.  I actually really like this system, since you can quickly and easily switch your shot type, with only needing one button.  The only real downside is mashing the shot button so much when going through the stages.  It would get really noisy with an arcade stick!  In some of the modes, you can set each shot as a different button if the mechanic doesn't appeal to you.  I only played the game with an Xbox 360 controller, and the stick moved the ship a bit too quickly for my tastes, which resulted in many a crashed ship.  I don't think the keyboard and mouse would fix that problem for me, so I'd have to try out some different controllers to find a perfect fit.

In some of the game modes, you can select bomb style, power style, or strong style (but can you be the king of it?).  Bomb style is just what it sounds like, you have a stock of bombs.  Power allows you to use Hyper mode, but you don't have bombs.  Strong style is a combination of the two.  Personally, I need the bombs more than the hyper mode.  The bombs not only protect you by destroying enemy bullets, but they also do damage and even activate automatically when you are hit (in most of the modes).  Hyper mode requires filling a gauge, but when you activate it, your shots are much bigger and stronger.  Seeing it with the spread is screen-clearingly fun!

As fun as the game is, I did have a few problems with it.  Mostly, it is the numerous little systems in the game that it doesn't explain (or if it doesn't, I haven't found where).  Hyper mode requires filling a meter...sometimes.  Others, it takes from you bomb stock.  I'm not sure which is when.  There's also a Red Gauge in some modes.  I have no real idea what it does or how to fill it.  I assume the enemies fire more bullets when it is full, but that is just a guess on my part.  Black Label has numbered chips to collect.  I don't know how to make them spawn as certain numbers, or exactly how they work.  I only know they are multiplier chips because of the achievement descriptions.  Lastly, many enemies have laser attacks.  These aren't avoidable, so you have to use your laser attack, which shields you from them.  I eventually figured that out, but knowing it ahead of time would have been nice. 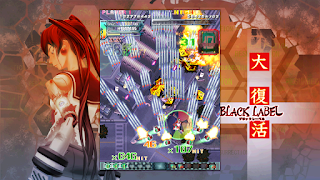 Being a shmup, a normal game only lasts about 30 minutes.  Of course, the point of these games is not usually to beat it, but to beat it on one credit.  I'm not sure I ever could beat this particular game on  one credit, as the later levels are really crazy with the shots everywhere.  Plus, the secret boss at the end is beyond ridiculous with its attacks and HP.  I do want to get better at the game, since I think it is fun (except the secret boss).  If you are a stickler for achievements, the game has 100 of them for you to try.  They are spread across the various modes (mostly normal and black label though), but 100 seems like an excessively high number.

DoDonPachi Resurrection is a fun shmup that I would definitely recommend to fans of the genre.  It's not the most clear in terms of mechanics, but it does offer multiple modes to play around in.  For shmup fans, I would say it is worth the price, as you will get your money's worth playing all the modes, getting better at the game, and maybe even trying for the long list of achievements.

The Bad:
Even on the default setting, the later levels are crazy.  It can be really easy to lose yourself in all the pretty effects everywhere.

The SaHD:
The secret boss got really boring after fighting him for 20 minutes.  It really needs a lot less health, that is ridiculous.

(Review code for DoDonPachi Resurrection was provided by the publisher)
Posted by The SAHD Gamer at 11:08:00 AM