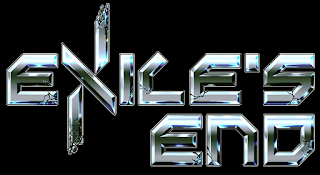 When I first saw footage of Exile's End, I was definitely intrigued.  It appeared to be a metroidvania game, which is a genre I very much enjoy.  When I tried the game out, I soon learned that is only part of what the game is.  Especially in the beginning, the game feels more like a survival horror game.

Why is that?  Well, you don't have any weapons at the start of the game.  In fact, you can't even fall too far without taking damage.  I already dislike fall damage, and putting it in a game like this doesn't make me like it any more.  It slows down the first few minutes of the game.  While it gets corrected quickly, it still leaves its stain on the rest of the experience.

The weapon situation, though, is far more annoying.  While I can accept not starting the game with a weapon, the first one you get is a rock.  Yup, just a plain rock.  You can hold a few, and even retrieve them after thrown (as long as you don't leave the screen), but they are next to useless.  For starters, they fly in an arc.  If that doesn't sound bad to you, you obviously have not experienced that, or seen the AVGN video on Friday the 13th on NES.  After what feels like forever (although it is only about 15-30 excruciating minutes), you get a pistol.  It thankfully has unlimited ammo, and works pretty well, even if it is weak.  Other weapons you get are limited by either ammo or energy, making them useful only in certain situations.  Otherwise, stick with the pistol. 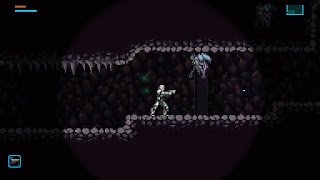 One of my biggest problems with the game is some poor design choices.  The best example is a point where you have to destroy alien...thingys...sitting on the ground.  You come across one, the character remarks about it, and you move on.  Trouble is, you can blow them up with grenades.  It's not mentioned, so you would have to try that to see it's possible.  Furthermore, you don't even know you have to do it.  It removes some stone barriers that block your path.  Too bad the alien devices are far enough away that it's far fetched to think there is a connection.  However, there is one that is that is right in front of one, so you can see it.

It's behind another one, meaning you have to figure it out before the game shows you it is possible.

Now, I don't want it to have a cut scene every time a door opens (thanks, Legend of Zelda!), but it's not too much to ask to have something designed well enough that it can be figured out in a reasonable amount of time.  There's more stuff like this in the game, such as the black background of the health and energy meter blending in too much, staying crouched after landing from a high jump/fall, or the disproportionate amount of energy pickups to health ones.  They may be small on their own, but adding them all together makes it a big problem.

There are no save point areas in the game, as the game auto saves whenever you enter a screen.  This is both good and bad.  Good because if when you die, you don't start back too far from where you were.  Bad because you can easily get stuck.  A save room usually would refill your health, so you get none of that in Exile's End.  Instead, you can get stuck with low HP, and having to hope you can kill the next enemy and that it drops health so you can survive and not get sent to the title screen repeatedly.  There were times that I contemplated starting over, since I was in a tough spot with a sliver of HP left.  That's not really a good thing. 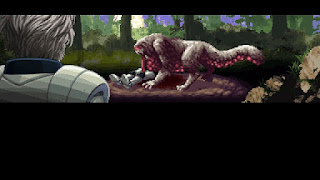 That might not be as big of an issue, but the game is filled with cheap hits and deaths.  The cheap deaths, usually done by floors of spikes you can't see until it is too late, are easier to deal with, since they are spaced apart and the frequent auto saves mitigate their threat.  The cheap hits are far worse, since they take advantage of those frequent saves to hurt you.  Besides instantly turning and shooting enemies, there are also enemies that pop onto the screen, leaving you next to no time to react to their inclusion.  Top it off with numerous places that have ceiling spikes just outside of your camera range (and above ledges you have to jump to), and you have a recipe for making people quit.

Exile's End ended up being a disappointment.  Even thought the graphics are great, I was expecting a more metroidvania style game, not a awkward 2D wannabe Souls game dressed up like one.  It thankfully isn't very long (there's a 3 hour speed run trophy), but it will definitely leave an impression.  If you have exhausted all other metroidvania options on the PS4, then it might be worth trying out the game, but I definitely can't recommend it over other offerings on the console.


The Good:
The retro graphics, enemy and location designs are really good.

The Bad:
Many puzzle and gameplay design choices.  I'd be more specific here but you can just re-read above.

The SaHD:
I'm surprised there is no option to end your exile by turning the pistol on yourself.  It would only take 10 shots...

(Review code for Exile's End was provided by the publisher)
Posted by The SAHD Gamer at 11:52:00 AM