I enjoy playing visual novels, and really wanted to try STEINS;GATE when it first released on the Vita.  I didn't get a chance to, so I jumped at the chance to try out the PC version.

The game starts out introducing us to the main character that we will be following around and he's...well, an idiot.  Okabe Rintaro (Japanese order) fancies himself a mad scientist (named Hououin Kyouma) on the run from the evil Organization.  He's pretty much that guy that didn't really grow-up, and still plays pretend.  Even so, his silliness is the cause of some funny dialogue (I like that he keeps adding "name subject to change" for the Phonewave), and a surprising amount of other characters go along with his disillusion.

There are a surprising amount of pop culture references, and they even figure in to the plot, some heavier than others.  Many of the references are obvious, but the names are changed.  All entries are put into the game's encyclopedia so you can read them later if you so desire.  The pop culture reference might make you think the game is a more silly, parody type of game, but it isn't.  There is a scene early on that at first glance would support that, but...well, I don't want to ruin it.  The game, and the science it presents, are both taken seriously.  I'll admit I don't know if all of the science was accurate when the game was created, but what little I do recognize seems legitimate.

STEINS;GATE is also a very long game, especially for a visual novel.  Clocking in at around 25 hours (assuming you read the story, which you should!), it takes several hours to even get to the first branching path.  There are six different endings to uncover as well as befriending the various characters through phone email responses.  Unless you want to re-read a big chunk of the game, creative use of the save files is recommended.  Thankfully you get more than enough, and you can even lock them so you don't accidentally save over them! 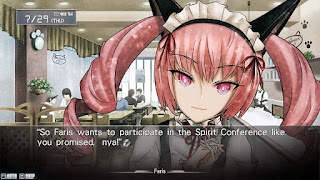 The game ran really well on my PC.  As a visual novel, it should run fine on many machines.  I tried using both mouse and keyboard and a controller to play the game.  Since a vast majority of the game is reading, either works well enough for that.  There are several points where you have to take out your phone, whether to read messages or respond to emails, and here is where I have to recommend the controller.  Despite having many more buttons on it, the keyboard doesn't seem to have one that calls up the phone.  The options only list the controller buttons, which are, by default, mapped to the triggers on an Xbox 360 controller.  I didn't see an option to set it on the keyboard, which effectively locks off an important function in the game.

STEINS;GATE was a really good story, and a good visual novel.  It does take awhile to get going, but that's because the story is long and involved.  I had fun playing the game, however I still would prefer to play the Vita version.  Even so, the game is an easy recommendation to science fans, and fans of visual novels.  Definitely a great one, and I'm looking forward to the sequel!


The Good:
A very hefty length for a visual novel with a really good story.  Locking save files is a great idea.

The Bad:
The story is a slow burn that takes awhile to really get going.

The SaHD:
The early scene with the alpaca game was done brilliantly.

(Review code for STEINS;GATE was provided by the publisher)
Posted by The SAHD Gamer at 11:20:00 AM