Set years before Final Fantasy XV, A King's Tale is Noctis' father telling him a bedtime story.  To keep with the way-back feeling of the setting, the game is a 16 bit retro side scrolling beat-em-up.  How can that go wrong?

There are three different attacks and a dodge set to the face buttons.  X is your quick attack, Y is the strong attack, and B is the shield bash.  Different combinations of the buttons make up the simple 3-hit combos in the game, all of which are available from the start.  If you are not near your enemy, the quick and strong attacks will have Regis throw his sword and teleport to it and continue his combo.  This usually works, but sometimes you end up teleporting to another foe when you are trying to fight the one in front of you.  The shield bash only does damage as a combo ender.  It also deflects projectile attacks back at the sender, where the quick attack will send it at another target.  The dodge is set to the A Button, and is useful to get behind enemies, or get out of a group of them for some breathing room.

Regis can also use magic, but not from the start.  As you progress, you unlock 3 different elemental spells that must be charged to be used.  Oh, and you need MP, too.  Sometimes defeated enemies drop MP pickups, which is the only way to refill MP.  It's not much, so you really need to save it for when you need it, such as against the magic-weak Flan.

If you can hit enemies enough without being hit yourself, you can summon one of Regis' friends for a devastating attack.  Plus, his Armiger gauge will also be building, which allows Regis to do a super strong attack at a single target.  Summoning any of his friends beforehand will allow them to do an extra attack during the Armiger attack.  These are really useful, but the not getting hit part means it's hard to use these wonderful tools when you may need them most.  Still, they can be crucial on boss fights to help you survive.

Combat in the game is pretty fun, but does hamper some of that fun behind a wall of complexity.  Different enemies are vulnerable to different types of attacks.  Pretty standard fare for the genre nowadays.  When they are then mostly immune to the other two attacks, it gets really messy when different types all cluster together.  There's also two different enemies that are only really vulnerable to the shield attacks.  So, you end up just mashing B to defeat them.  This isn't too excited, and since only 1 of your three attacks does damage, it takes longer than it should. 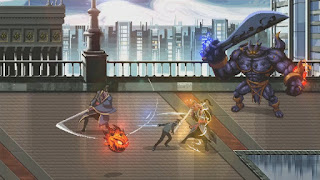 Plus, sometimes there are simpler ways around the complexity.  Flans are very resistant to physical attacks, but you can wail on them, build up a companion attack, and just use that to destroy them.  No need to use MP.  Cactuars will dodge after you hit them once, but they always try to go behind you.  If you turn and attack, you will likely hit them with a combo ender and stun them, which allows you to then mash attack to kill or seriously injure them.  While there is a fancier method, why not just do that and save yourself the time and effort?  I can get behind complex situations, but when there is a simple solution, the complexity isn't that well implemented.

The story mode can be completed in under 2 hours, which is really short.  As an old-school Final Fantasy fan, I did appreciate the final boss, who you will just have to see for yourself.  There is an alternate ending if you are so inclined to go through it again.  Upon completion, you unlock dream battles, which are small arena-like fights with special conditions, like fighting many ranged enemies, all flans, etc.  Each also has a challenge star, which are optional challenges for each mission, like not using magic, or doing it quickly.  This does add a little more content, but it's about the simplest thing they could add.  Some last a lot longer than they should, which also helps to limit the fun you have.

Obviously I'm going to love the look of the game, and is was pretty fun, too.  It was overall a good freebie for preorders of Final Fantasy XV, and might be worth a few extra bucks ($5 or less) if sold at a later date.  It's pretty short and there isn't much replay, but it is totally worth playing for beat-em-up fans or old-school gamers.

The Bad:
Tries to be more complicated that it should be, makes later fights messy.  Short.

The SaHD:
Is the town really called Insomnia?  Is that the best they could do?

(Download code for A King's Tale: Final Fantasy was obtained free with preorder)
Posted by The SAHD Gamer at 8:27:00 PM