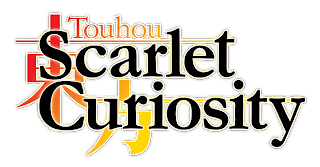 Touhou: Scarlet Curiosity takes the characters from the popular PC-only Touhou shmups, and this time puts them into an action RPG.  Only two of the characters are playable, but more make appearances during the course of the story.

You can choose which of the two ladies to use.  Thankfully my new favorite Sakuya the time manipulating maid is one of the two.  Her boss Remilia is the other.  They both have separate equipment and learn different skills.  Both characters have separate save files, too, with multiple slots for each.  Their story dialogue is different, but they appear to follow identical paths through the game.

The game itself is pretty simple, you run around the 3D environments attacking enemies.  There is a default attack string and three skills, one of which is a spell.  Under your HP are little diamonds that represent your skill points (in groupings of 100).  Each skill takes a certain amount to use, and the points will refill fairly quickly over time.  The large diamond to the side of the HP is the magic meter.  It doesn't fill automatically, but by doing damage.  Using a spell will pause enemy movement and make you invincible while it is happening, as well as doing a hefty chunk of damage to any targets caught in the attack range.  As you level up, you unlock more skills, and you can change them just about anytime.  I routinely used skills that were better for groups, but switched to my stronger ones when facing bosses. 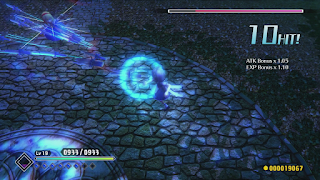 The flow of the game is pretty consistent throughout.  After some story, you can select your next destination on the world map.  There may be times that you can choose to do one or the other location first, but the game is pretty linear. It isn't until the end of the game before you can return to any of the previous locations.  Also when you beat the game a bonus dungeon opens up.  It even takes a few dungeons before you get a store, which seems like an odd choice.

The dungeons can get pretty long and sometimes have multiple paths to get through them.  There are treasure chests to find and pots to break, and plenty of enemies to fight.  Strangely, only half of the areas or less have mini-maps.  I see no reason why they all can't have them, so it would be easier to make sure you explored every nook and cranny.  I felt the enemies are a little too good at blending in to the scenery, and sometimes the environment restricts your sight.  Enemy attacks are pretty basic, but true to the series' shmup roots, many enemies have bullet spreads that you can try to dodge.  Bosses have very bullet hell-like patterns, and plenty of cheap hits.  The only real option you have to avoid damage is jumping, since there is no block or other defensive move.

Your characters can each equip one weapon, one piece of armor and one accessory.  The equipment slots go in this order, but they strangely don't label them.  There are several different pieces of each, and the stats of each are random within certain ranges.  Therefore, even though you get multiple of the same pieces, they are different from each other.  They also have equipment at different rarities.

Since you can jump, they also throw in some platforming in the dungeons.  There are ledges to jump up, and even pits to cross.  Unfortunately, near the end of the game, the platforming gets really obnoxious.  There are a few parts where you have small platforms to jump around, and some enemies that are more than happy to knock you back and off the platform.  Or, there are crazy trap-filled platforms to run through.  Thankfully, there aren't as many as they could have had, but they still all result in character death. 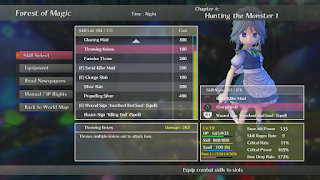 Dying in Scarlet Curiosity takes a percentage of your money (ugh) and puts you back a bit before the pit you fell in.  The only times I died in the game were because of the pits.  There were a few close calls on two or three of the bosses, but other than that I had no difficulties making my way through the game.  While you go around the different levels, there are plenty of pots to smash.  A lot of these have healing pick ups, making it easy to keep your HP high enough to mash your way through the game.

Touhou: Scarlet Curiosity is a decently fun game.  It took about 8-10 hours to complete, but this felt like it lasted just a bit too long for what the game is.  It's not too hard, save for a few tricky platforming parts.  The game is probably best for Touhou fans, since it is a pretty average game otherwise.


The Good:
A competent action RPG.  Two playable characters is also a plus.

The Bad:
Game felt like it went on just a bit too long,  Too many pits for cheap deaths.

The SaHD:
Even though I've only played two Touhou side games, I already have a hated rival: Utsuho the tengu girl.

(Review code for Touhou: Scarlet Curiosity was provided by the publisher)
Posted by The SAHD Gamer at 7:16:00 PM