When I first saw MeiQ: The Labyrinth of Death, I figured it for another dungeon RPG that I should pass it off to my wife for review.  However, before I do that, I still try the games out for myself.  I had some hope for MeiQ after seeing the character designs, and the fact you get robotic guardians in your party sounded really cool.  After a few hours, I decided to keep playing the game myself!

The game is still a first person dungeon RPG, but seemed to do away with the parts of the genre I really didn't like.  The only gimmick panels are movement related, like sliding or teleporting.  No damage floors, no dark zones, and no anti-magic nonsense.  There are hidden doors in false walls, and of course mimics, but it is easy enough to figure out where they are.  Since there is no real formation, there aren't enemies that mess it up and destroy your carefully laid out party.  While there was some grinding (discussed more below), it took several hours before I actually had to do it, a welcome reprieve in this type of game.

You start out controlling Estra, the main character, and her first guardian.  Each of the girls and guardians represent one of the five elements - earth, water, metal, fire, wood.  Estra and her first guardian are earth.  Once you complete one of the towers, Estra gains a costume that is affiliated with one of the other elements, allowing her to more easily switch her elemental type.  This really helps when you give her different guardians, so they get bonus stats.  Besides the mages and guardians each having levels independent of each other, the forms also have their own level, which increases with being in battle.

The way stats work in MeiQ is also different from other games I've played.  Your main stats aren't too high, but seeds and stones that the mages and guardians equip will increase the percent that the stats are multiplied by.  Plus, each mage's proficiency (number) of any element is added to the percent of any guardian paired that shares that element.  If Estra has an earth proficiency of 120, this is added as a percent to the guardian's stats, on top of whatever it gains from its own equipment.  Granted, the guardian parts will actually have to give the stat, since any % times zero is still zero.  The numbers are very fluid, since you can change parts and equipment so easily, but it really pays to toggle them around to find the best bonuses you can get.  It really helps, especially in the late game. 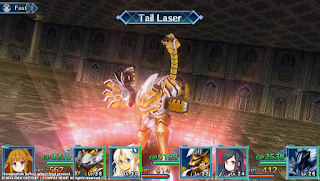 Battles are mostly random as you move around the maps.  You can have up to three teams, made up of one mage and one guardian, in battle at a time.  If a guardian falls (runs out of HP), the mage can continue, but the opposite is not true.  The mage is also predictably squishy, so you don't really want them in the front lines.  Each turn, one member of the team can act.  A guardian's available attacks are based off what parts they have equipped.  It actually shows your guardians in battle, and they have many attack animations.  There are some really cool stones that will even allow multiple attacks in a turn.  Mages can also attack and use magic spells, which are use-based instead of MP-based.  I am more used to an MP-based system, but this works out better as you level up because you get so many uses of the basic spells.  I tended to save their spells for tough enemies and bosses, since they could do decent damage and the buffs they gave are really handy.  The spell Estra gets at level 40 is especially powerful!

I do have some problems with the battle system, though.  While the game says that a mage is protected by the guardian even if they use a spell, this wasn't always the case.  There were plenty of attacks that targeted them when it shouldn't have.  The game does state that some attacks can target the mages, but if the attack hits the mage that cast and the other two guardians, that doesn't seem like it's an attack that would target the mage.

If a mage or guardian dies, you are pretty much stuck waiting until after battle to fix it.  There is a resurrection spell for guardians and one for mages, but only two characters each have one and they are gained at higher levels.  There are also items that can resurrect and heal, but they strangely can't be used in battle.  Granted I didn't need them very often, but it still seems like a bad choice.  If one of my guardians or mages died, I would just warp out of the dungeon to heal, and use one of the shortcuts to quickly get back to where I was.

Lastly, battles can be really inconsistent.  Even in the first dungeon, there are the rare enemies that are really tough but run away.  Some enemies are a lot tougher than all the other ones in the dungeon.  There are even mutant enemies (shown by the energy circle at their feet) that have much higher stats than their brethren.  When defeated, enemies can vary drastically in the amount of experience, gold and aether they give.  Some harder enemies give very little, and some give enough to level you up several times.  It's not always a bad thing, but it can make grinding a lot more random than you would think.

MeiQ isn't a very hard game overall.  There are harder parts, usually because the boss' level is higher than yours.  The hardest boss fights are the few times you have to fight two in a row.  Even so, if your party wipes you are just sent back to the town with all of your experience, money and progress.  That's barely a punishment.  While I didn't have to grind really at all in the first 8 hours of the game, there were several parts later where I did.  Only characters in the battle party get experience, so if I switched it up for a new dungeon with new elemental weaknesses, I had to do some grinding to get people up to speed.

It took me almost 29 hours to finish the main story.  I could have shaved off a few hours by not trying to complete every side quest (stupid rare drops from stupid rare enemies), and if I had switched it to hard mode while grinding (for the extra experience).  I also spent a lot of time filling out every map, checking for all the sealed doors, and grabbing every treasure chest.  After beating the main story, a bonus dungeon unlocks if you still have the need to go dungeon diving.

Admittedly, when I first saw MeiQ: The Labyrinth of Death, I thought "Oh, girls and robots!  Sounds cool...oh, it's a dungeon RPG."  While it does have many similarities to Wizardry and its ilk, I actually had a lot of fun playing MeiQ.  It is a dungeon RPG, but forgoes a lot of the gimmicks and other things that keep me from liking that genre, while having a robust equipment system that is very fulfilling to take advantage of.  I think that fans of DRPGs might find the game too easy, but RPG fans should definitely try the game out, especially if you have wanted to get into usually unforgiving world of dungeon RPGs.


The Good:
A dungeon RPG that cuts out (or delays) a lot of the stuff I don't like about DRPGs.  Also a very useful and fulfilling equipment system.

The SaHD:
Considering how many of the females are scantily clad and busty, I thought the game would have fan service, but there really isn't any.  Except for that sweet mouse pad in the limited edition.

(Review code for MeiQ: The Labyrinth of Death was provided by the publisher)
Posted by The SAHD Gamer at 2:29:00 PM