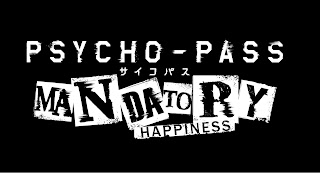 PSYCHO-PASS: Mandatory Happiness is a visual novel set in a futuristic world where everyone's emotional state and potential is quantified and monitored.  People who are more prone to committing crimes have a clouded "hue" to them, and are watched and medicated accordingly.

To me, it sounds a bit like Minority Report, but without the psychics.  At least in the game, the crime is usually already committed by the time you apprehend the criminal.  Minority Report might actually be like that, I haven't seen the movie, just remembering the trailers from years ago.  The idea is really interesting though, and I do like visual novels, especially on a handheld, so it was definitely a game I wanted to try.

There is a special group of people, the Public Safety Bureau, that deal with the "latent criminals" and try to either subdue them so they can be rehabilitated, or destroy them if they are beyond help.  To do so, they have a special gun called a Dominator, that scans an individual and lets them use the appropriate amount of force.  If a person is beyond help, the gun basically paints the room with half of them.  So when I said destroy the criminals, I meant it. 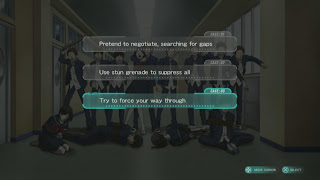 When you start the game, you get a choice between two characters.  Both of them are in the same division of the mental stability police force, but they have different roles.  One is an investigator, who is like an actual cop, where the other is an enforcer, who is someone that is a borderline latent criminal.  Since they are close to being criminals, they know how a criminal would think, and are also used as front line fighters.  When not in use, they have to be almost constantly supervised by the investigators so they don't go rogue and become what they hunt.  With such diverse freedoms, both characters have different roles, thoughts, reactions and choices in each of the similar scenarios.

Since the game is a visual novel, most of your time is spent reading.  At several points in the story, you will be presented with a choice, and this choice affects how the story progresses.  Some choices might seem trivial, but it becomes apparent early on that they have a lot of weight behind each and every one.  The game is also helpful in that it shows where the story branches off, but showing a pop--up on the right side of the screen.

It actually shows a few things over there, but that's the only one I could really figure out.  The rest just kind of happen, with no explanation what they are or what they mean.  There are ones that show a portrait and fill up what looks like a health bar.  Some show your character with an up arrow.  Any kind of tutorial or information about this would really help, since I'm sure they are somewhat important.  The instruction book isn't any help in that regard either. 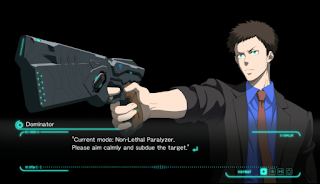 So while it does show where the story diverges, I'm not always fully sure why.  Which choices affected it?  I still made it through the game just fine, but I would definitely like to know more about changing the route to see other endings, scenes and get trophies.  There were many times where I stopped and though about my choices, and what it might change.  This was especially true when prompted about taking the supplements to clear your hue.

I enjoyed the story in the game.  It was mostly satisfying, even with the few predictable parts.  It also took me a bit to keep all the characters straight, but I was fine by the middle of my second playthrough.  However, without spoiling anything specific, it seemed like the game was building toward something that just didn't resolve.  Also, one character ending I got (which it said was a 'true end') felt random and abrupt.  I don't know if this ties into the TV show, or maybe is explained in another route.  It's also possible that it's a preview of a sequel.  It didn't ruin the experience, but it also didn't sit right with me.

There's also a mini-game to play where you slide matching number tiles to add them together.  It's surprisingly fun.  It isn't too hard to grasp, which is good because they tell you next to nothing about how to play it.  It can get pretty hard in the later levels, though.  The points you earn in this game are used to purchase the picture still and voice clips from the cast.  You get a lot of points for completing levels of the game, which is good because you need a ton to buy all the extra stuff.


PSYCHO-PASS: Mandatory Happiness is a visual novel, so it only takes about 5-6 hours to get through.  However, having two selectable characters and many branching routes gives the game a lot of replayability.  There were more changes going through a second time than I thought there would be, which is a welcome surprise.  I haven't seen the show yet, and had no real difficulty following the story, other than sometimes confusing character names.  I am definitely going to watch some episodes, as the game has me interested in it, too.  I would definitely recommend crime drama fans and visual novel fans try out PSYCHO-PASS.


The Good:
Visual novels are always welcome on my Vita, and the story was really good with lots of choices to make.

The Bad:
Even though it plainly shows when a route changes, I have no real idea what decisions affect the path and ending.  Well, except the bad ones, those are pretty apparent.

The SaHD:
There was a company taking pre-orders for an actual Dominator gun, with many LEDs and even motors so it would transform.  It looked almost as awesome as it was expensive.

(Review code for PSCYHO-PASS: Mandatory Happiness was provided by the publisher)
Posted by The SAHD Gamer at 2:28:00 PM