RIVE is a hardcore, twin-stick shooting action game.  You move around the various rooms, hallways and ducts of a derelict space ship while battling waves of enemies at various points.  The right stick can be set to aim and fire, or just aim, while firing would be another button.  That's sadly the most control you have over the button configuration.  The jump is set to L2.  This works...but I would like to try it as another button, considering I've hit both R2 and the X Button in a twitched response to jump.  Thanks, muscle memory.

You can use bits from defeated enemies to occasionally purchase upgrades and weapons for your vehicle.  They have a variety of types of special moves, from close range to AoE.  Unfortunately, you only get one shot before you have to replenish.  Not one shot of each, as would make more sense...just one overall.  Therefore, it's probably best to just buy the one you like and forego the rest.  Or, being able to actually upgrade your gun would be nice, too.  To get more ammo for the special attack, you have to hope for a random drop from an enemy.

Thankfully, unreliable special attacks aren't the only thing you have to help you.  You eventually get power-ups that let you hack turrets, nurse drones and other things to help in your mission.  Nurse drones will heal you at the cost of their health, and be destroyed afterwards.  Turret drones shoot when and where you do, effectively doubling your fire power.  Sadly, they are destroyed when they run out of ammo or health.  Considering how much you have to shoot, they don't last long.  So like most things in RIVE, they work okay, but could be much better and more reliable.

Probably my favorite part of the game is the personality it has.  The two talking characters are well voiced, and have some good dialogue.  A fair amount of the dialogue is tongue-in-cheek though.  The game does start off by switching the camera to "side-scrolling shooter" mode after all.  They also make references to video games, memes and tropes.  At one point, the player character even remarks why would someone store fuel in the middle of a molten furnace.  He also wastes the effort and space to have fireworks in his small vehicle so he can shoot them off when he completes a mission.  That's dedication.

The environment is really good looking and the atmosphere is set perfectly in each location as well.  Trouble is, the game is really too linear to take advantage of it.  You run down some hallways, stop, fight enemies, go to another room, stop, fight waves of enemies, rinse and repeat.  Being able to roam around the station, or even use the warp rooms 'correctly' (ie, not only one way to a set destination) would make the game a lot better.  I would really like being able to explore this cool looking desolate place instead of being shuttled off to another place to fight way too many enemies.

While I'm on the subject, the difficulty of the game is its biggest downfall.  It is just unapologetically hard.  Enemies swarm in from off the screen, move quickly and do a lot of damage.  The most prolific enemy is a fast mine that homes in on you with absurdly high accuracy.  It might not be that bad if they didn't routinely throw 5 or more at you at the same time.  Enemies from every side of the screen, plus homing enemies, plus homing shots, plus high damage equals high frustration.  Don't even get me started on the shielded enemies that are only vulnerable when dropping 8 of the homing mines and/or other homing enemies. 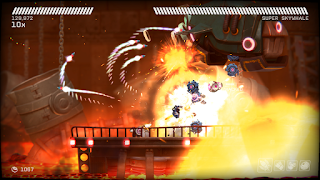 Assuming the enemies don't kill you, the environment likely will.  The whole game is filled with areas and traps that either flat out kill you instantly, or do half your max health.  Kind of negates the armor upgrade, huh?  Sometimes they just combine them all to piss you off.  One early section had me on a conveyor belt pushing me toward a high-damage saw and an instant death stomper.  On the other side of me was another instant death stomper.  I had to constantly jump to avoid moving in one direction while not going too far in the other.  Oh, and they also had me fight waves of enemies (those stupid mines) while doing so.  This is a bit much for the end of the second stage.  Sheesh.

At the very least, the game has plenty of checkpoints (although there is no indication of when/where they are) and there is no real penalty for dying, so you can keep trying until you succeed or quit playing.  It also loads really fast from death (yes!).  Sadly, this also has the problem of sometimes putting you in a situation where you might die again instantly, or at least take unnecessary damage.  The game is filled with instant death following the need to make split second decisions, so I guess it is true to itself.

The game isn't overly long...assuming you don't die a lot.  Sadly, that about doubles the play time for mere action game mortals such as myself.  To be fair, the difficulty is apparent when you start the game, since you can only select 'hard mode'.  It is possible to switch to a slightly easier mode in the game.  When/if you do, it places a bear on the screen in an attempt to humiliate anyone trying to make the game more fair.  I get what they are going for, but trying to make fun of a person just trying to have fun playing a video game, or one trying to make the game not so unfairly hard, is just dumb.  Anyway, you can replay the missions if you want, and there are two other modes, speedrun and single-credit mode.  Both speak for themselves, and both are modes I have little interest in.  Single-credit works for shmups, but here?  Yeah, good luck with that.

Overall, RIVE is a fairly average game.  Vehicle movement, attacks and upgrades work okay, but easily could be made much better.  The difficulty is cheap as well.  This is fine for some folks, but it takes the game down a few notches in my book.  I see a lot of potential in how the hacking and other things could have made for a great Metroid-like game, but instead it's just a linear game with hordes of frustrating enemies.  If you like unapologetic tough-as-nails action games, then definitely try out RIVE, but everyone else can easily skip it and not miss much.


The Good:
Lots of personality in the characters, environment, and dialogue.

The Bad:
Cheap, just throw everything at the player at the same time difficulty.

The SaHD:
The shmup-like sections are kind of fun.

(Review code for Rive was provided by the publisher)
Posted by The SAHD Gamer at 12:56:00 PM