Touhou Genso Rondo: Bullet Ballet combines the disparate genres of bullet-hell shmup and fighting games.  It's actually not as strange as it would seem, as this has been done before, if anyone besides me remembers Wartech on the Xbox 360.  Basically, it's a one on one fight where you each launch hails of bullets at each other until one person stands victorious.  The characters in the game are people from the various Touhou games, which have the distinction of being well-known shmups that I somehow haven't played yet.

After booting up the game, I jumped into the story mode, since why not?  That's usually where you start.  Turns out, this was a bad idea.  I got a very basic idea of the controls, but was slowly being outclassed by the computer.  Since it was the first opponent, I realized it was just going to get harder.  So, I quit out and found the tutorial option.  This was a good move, even if the tutorial people are a bit too chatty.

Each character has a main shot, sub shot and charge shot, and even melee attacks if you get close enough.  The main shot is, well, your main attack, mostly aimed at the opponent and the sub shot is usually more focused on covering an area, rather than a direct attack.  You can dash, and even slow your movement to make it easier to dodge between shots.  Shooting any of the three shots while dashing or using slow movement will change the shot, giving you access to 9 different types of shot attacks.  I wish the dashing was only active if you held the button down instead of just activating it, so it would be easier to use its shot variations.  I didn't see any option to change it.  If you narrowly avoid an opponent's shot (called grazing), you build up charge.  Once a charge segment is filled, you can use a charge shot at the cost of some of the charge meter.  However, you can also use this meter for other things, like spells. 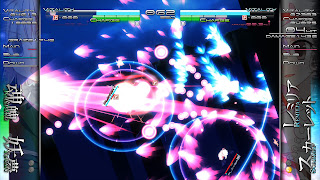 Spells cost at least one charge segment and a bomb stock (denoted by the "B"s under your charge meter at the top of the screen.  If you activate a spell, it places you at the top of the screen, and your firing patterns change drastically.  Instead of normal-looking shots, you now have firing patterns like a shmup boss, filling the screen with bullets.  You aren't invincible in the mode.  There is a ring around your character that depletes when you are hit.  If it runs out before time does, you exit the mode prematurely.  The opponent can also use one of their bomb stock for an actual shmup bomb, which will clear out some of the bullets, making their lives easier.  It's really cool, but ultimately not very useful against the computer.  Upon activation, they tear into with their shots, while expertly dodging pretty much all of yours.  It would work against an actual person, since they rarely have mathematically precise movement, and are actually prone to freaking out when a screen full of bullets comes at them.

After learning the basics, I then set about trying out all the characters, seeing who fits my style, and what enemies would be a problem.  I started to get the hang of the game after a few matches, and started doing much better.  Strangely, one thing I found that helped was spamming the main shot button instead of holding it down.  I don't know why that made them actually hit the opponent more often, but it made a big difference.  Even so, the CPU is a tough opponent, and I didn't see a way to tone them back so I could eke out some easy wins in the story mode, or any other mode for that matter.  As a computer, they are very proficient in the pinpoint-accurate dodges necessary to avoid damage when they want to.  They also have full access to the 9 shot types and chaining together shots with frame-perfect accuracy.  Thankfully, they don't do it all the time, so you can actually win matches.

Touhou Genso Rondo features a story mode for each character, arcade mode, boss rush, versus cpu, and versus player, online and off.  Story mode is several battles linked by dialogue, just as you would expect.  Arcade mode is more like a survival mode, since you fight an endless string of opponents, with some life being restored to you in-between matches.  Boss rush is you versus the CPU, but they start off in spell/boss mode.  Thankfully you only have to survive until the time runs out to win a match, since the computer is as adept at filling the screen with inescapable bullcrap as they are at dodging your attempts to do the same in the other modes.  Fights in arcade and boss rush are only 1 round each.  Versus CPU and human are pretty self explanatory.  Early on I used the versus CPU a lot to get the hang of each of the characters.  I'm also nowhere near competent enough in my abilities to go online and get destroyed.

Touhou Genso Rondo is very unique and a fun game.  The merging of shmup and fighting game is pulled off very well, and there is a lot of depth to the fighting.  After playing it for a while I really started to get the hang of the game, and the modes offered are good.  The computer can be a real pain, since their accuracy and dodging ability is as good as they want it to be, with sadly no way I could see to adjust it.  Shmup fans should get a kick out of the game, and fighting game players should give it a whirl, too.  You might be surprised how fun (and difficult) the game can be!


The Good:
A well-made combination of shmup gameplay with fighting game mechanics.

The Bad:
If the computer wants to avoid what you throw at them, there isn't much you can do to stop them.

The SaHD:
For whatever reason, I was best with Sakuya.  It also helps that time-stopping maids with knives are cool.

(Review code for Touhou Genso Rondo was provided by the publisher)
Posted by The SAHD Gamer at 2:40:00 PM