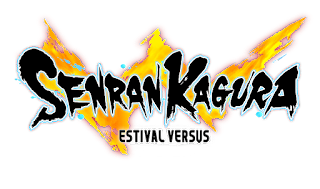 Finally...the girls have come...to consoles!  Sorry for that rock-solid intro, but I'm almost as excited to finally review the game than I am of it being available on a home console for the first time.  Senran Kagura: Estival Versus takes place after Shinovi Versus, and is in that continuity.  (Don't get me started on that...)

Much like its predecessor, Estival Versus is a 3D action game where the girls have been summoned to a tropical island where the dead reside.  In order to go home, they much participate in the Bon Festival, and destroy their opponents' festival platforms.  Besides being an excuse to have the girls in swimsuits (I'm not sure the game needed and excuse...), the platform destruction is worked in to the game, and we get to meet Ryona and Ryobi's departed sister.  Story scenes this time around are less narration by the characters and more interaction between the characters.  Most times it's not as deep as the other (no, seriously, there is really good story in these games), but they deal with some good themes.

Each stage is a battle where you have to fight some enemies of various types, and usually fight another character (or multiple) as a boss fight.  The square attack is used for your normal attack string, the end of which usually has a launcher.  The triangle button is your signature breach art, and you can hold it for a block-breaking attack.  X button is jump and the circle button is dash.  Unfortunately, there is a big downtime at the end of a dash where you cannot move while the animation finishes.  It really slows down the action, but I suppose it is a balancing thing for the versus modes.  Being stuck in a slow animation is still not fun, as much of the action feels slower than previous games in the series.  Some can be canceled by jumping, dashing or blocking, but it's a pain to deal with in the first place, since other games in the genre aren't near as egregious.

The girls can also transform into their shinobi forms when you have at least one super meter.  The transformation animations are more involved this time around.  The shinobi form gives you slightly different attacks, and multiple air dashes to continue combos.  You also gain access to your super arts, which can be devastating when used correctly.  Instead of transforming to the shinobi form, you can shred your own clothes and go into "frantic" mode, which increases your speed and damage, but lowers your defense.  You also have access to new attacks and your super arts in this mode.  Of course, during battle both your an your opponents will get their clothing torn, and finishing them off with a super can completely strip them, complete with balls of light covering their parts (which I honestly prefer to the chibi faces and streak of light).

While the basic combat is mostly the same, they added a few new touches.  The girls can run up walls now, and preform a diving attack while doing it.  There are bomb items you can pick up and throw at enemies for various effects, like freezing or poisoning them.  My favorite bomb is the puppet one that gives you a pilot-able mech suit for a short time.  They have also added a friend on some missions.  You can use them to bust you out of a combo, continue yours, or team up for a flashy mid-air combo attack.  While this is a step in the right direction, I'm still hoping for an actual tag mechanic or even -gasp- couch co-op.

My favorite addition to the series is the location KOs.  Called "creative finishes", these are like stage fatalities, but with covered nudity ("conveniently placed apostrophes") instead of gore.  If you finish your opponent near certain areas of the stages (denoted by a sign with a "!" on it), they will be stripped and be launched into the environment for some more humiliation.  Several more have been added through patches to the Japanese version, which are included in the US release.  While most of them are location-based, there are three that are tied to specific costumes available from Ayame's store.  Those won't shred like normal, but offer a unique finish animation. 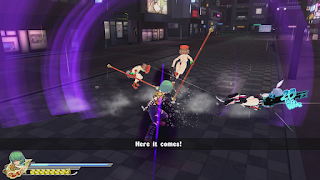 The story is presented as a long, single narrative where each stage has a set girl for you to use.  Once you have completed a level, you are free to do it again with any of the unlocked shinobi.  I like the single narrative aspect of the story presentation, but there is still some problems with being under-leveled.  Later on in the story it will bump a character's level up to 10, which does help.  As you make your way through the story, you will eventually unlock the extra (non-DLC) characters. It's a pretty long story, will 8 days having 5 or so missions each (usually one per school/group of shinobi).  Half the missions aren't very hard, but the ones against multiple girls (of which there are many) can be tricky.

The AI is about the same as it has always been, where it likes to attack the moment you are within range, or zip around you while you are trying to hit them.  In the final stages, it seemed that I would be assaulting them, and then I would just get hit.  Or, they would recover from me hitting them before I did.  Yikes.  They seem less prone to break out of your air combos, but probably because the button mashing mini-game from Shinovi Versus is gone.  While the AI doing these things might be them taking full advantage of the game's systems, I don't think it's what they should do on an "easy" setting.  It's true that I only failed a stage once or twice, but it had frustrating parts nonetheless.

Each character also has a mini story that becomes available as you destroy the festival platforms in the story.  Each story stage shows how many platforms there are, so it is easy to see where you missed them.  The "Girls Heart" stories open in a weird order, but you can see how many platforms you need to unlock them.  There are five stages in each one, and some dialogue in the stages that furthers the short stories.  They are pretty fun, a great way to get more experience, money and a nice picture at the end.  They can be pretty humorous, too.

Like Shinovi Versus before it, there are multiplayer modes in Estival Versus.  Hence why the word "versus" is in the title.  The modes have been expanded a bit since last time, and one addition in particular I actually like.  There is Point Battle (try to get the highest points by killing enemies), Understorm (collect panties that drop around the arena), Capture the Bra (it's a flag), Queen of the Hills (destroy platforms), Walker Battle (fight in the mechs), Shinobi Deathmatch (self explanatory) and Shinobi Survival.  Of the actual versus ones, Queen of the Hills, is the best, simply because it has team creative finishes.  I really like Shinobi Survival, because it is co-op against waves of enemies.  It's a great place to get experience for characters, but doesn't seem good for money.  You can do it by yourself, but the score won't upload, which is fine.  I'd love to play it with my friends if any of them get this game.  It's worth noting that the versus modes can have up to 10 people on the PS4 (only 4 for the survival mode), and 4 players max for the Vita version.

As a fan of the Senran Kagura games, I was happy to finally see one on a console, and Estival Versus did not disappoint.  The story is long and involved, but there doesn't seem to be as much exposition as previous titles.  There are some balance changes to the characters that I'm not too fond of, but it doesn't ruin the experience for me.  Multiplayer modes have returned (meh), but have added a co-op survival (nice!).  The AI can still be annoying, but the game overall is very fun.  Not one I would play around the kids, though.

The Bad:
The CPU opponents.  They can easily move out of the way of whatever they want, shrug off as many hits as they want, and hit you out of just about anything.  Fun!

The SaHD:
I'm glad some of the characters I really like using haven't been nerfed.  It seems like every game they tweak the characters, which usually results in some becoming terrible.  Katsuragi still hasn't recovered from the first 3DS game, where she was great...and now is not.  Haruka has been tooled with and is somewhat better, but still not good.  Ryona fell far from the previous game where she was top-tier, and Mirai somehow got worse.  Sadly though, I think newcomer Hanabi is the worst character.  Hopefully them make her more usable in a future game.

I'm still gunning for the platinum in the game, time permitting.  I only need to finish buying everything in the store and I'm good!

(Review code for Senran Kagura: Estival Versus was provided by the publisher.)
Posted by The SAHD Gamer at 1:27:00 PM