Aegis of Earth: Protonovus Assault is a very unique tower defense-style game.  Well, I'm not well versed in the genre (I'm not sure why...I should love them), so there very well could be another game like it, but I digress.  Instead of setting up contraptions on the routes the monsters take and kill them that way, you put your contraptions around your city.  To combat threats from any angle, you move that section of city so your weapons can attack it.

Honestly, it's a pretty cool idea that fits very well to the world they created.  The monsters move toward the center of your city, which is a big tower, and you put your defenses around it.  When enemies come from a different side, you can rotate one of the three main rings around your city to have your weapons fire on them.  You get a few types of weapons, like cannons, missiles and rapid-fire guns, and each has its own best usage.  Plus, early on you learn to combine two or three of the same type when lined up to be even stronger.  You also get more experience for killing enemies with it, so besides being legit anime, it serves a useful purpose.

You have limited spaces on the rings, since they are only so big.  Planning what to put where is important, because units can only combine when lined up.  Since it is a city, you also need power plants to make enough electricity to power your stuff, and places for people to live.  The more people in your city, the more money you get after each fight.  The happier the people are (when you win and have low damage and low to no casualties), the more refugees come to try and live there.  Structures can be upgraded and leveled up to raise their stats, and you can even modify them, which have various effects, including adding living spaces for your offensive units.  Because when I move to a fortress city, I'd want to live under the missile silo.  Oh, wait...

It takes valuable resources to build and upgrade the facilities, and many must first be researched.  While you can grind out some extra fights to recoup some if you made a bad decision, it is much more effective to plan out what you are going to to.  You can only build so much of any given unit, because the city can only hold so much.  There are also a few condemned areas that must be cleaned up first.  All constructed units can be moved around, which is really helpful.  It's also a lot cheaper than tearing it down and putting it elsewhere.  The first three rings hold all your units, but there is also a special fourth ring.  This is mostly used for disposable units, like shields.  One of the shields can even absorb enemy attacks to power your ultra secret weapon!

The mission select screen shows three missions that are just fights against 1-3 types of enemies.  The only last a few minutes tops.  If you need to, you can grind on these missions as they are three different ones each time, and you get experience, crystals and money after each one, plus some new people to live in your city.  There are special missions in the orders/requests tab that give better rewards and are worth doing if you can.  There are a few different types of enemies, each with a preferred way of dealing with them.  Unfortunately, you will see all the different types within the first hour or two.  It can still be a challenge to deal with different amounts and configurations, though. 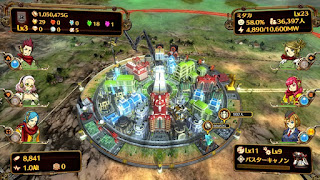 When in a mission, enemies will appear and move toward the central tower of your city.  Your defenses must attack and kill them before they can damage it too much.  If they manage to destroy it, it's game over.  Some enemies will target your defenses, too.  Any damage to a unit in zone (ring) 1-3 will be repaired after the battle.  However, if a residential unit is damaged or destroyed, some of your citizens will die, and the overall happiness of the city will dive as well.  Stopping most enemies isn't a problem, except for the space/time anomalies that summon monsters close to the city.  Those are annoying, since they are random and can really make you scramble.

Then, there are the boss fights.  When the Alt. Density levels (shown at the lower left) are over a certain amount, a boss monster can appear in a mission.  While this feels a lot more organic, it's also kind of annoying.  Bosses are very powerful, and having them appear at the end of a wave is not a welcome surprise.  The random nature also makes it impossible to plan for.  The bosses are definitely harder than normal enemies.  Each is different in what gimmick it uses while attacking you.  The best way to take them down is to learn when to hit it with your USW.  Also, killing them with the giant laser cannon is very satisfying.

You get a handful of characters over the course of the game, and each has a specialty.  While they all look unique, I really appreciate that they wear similar uniforms and have similar colors.  It really makes it look like they all belong together in the same unit, a design choice often overlooked.  There are six different jobs for them, and each character has special abilities.  The abilities are useful for certain things, like battle effects or getting extra money after battle, so it pays to use them all.  Well, you kind of have to.  The characters have a focus percent that helps dictate how often the abilities trigger.  As you use the characters, their focus rises.  They also have energy, which diminishes while characters are being used.  If you decide to put them on the sidelines and replace them with another character, their energy rises, but focus falls.  When you finish a mission, you can select one person to praise.  This not only gives them extra experience, but also an energy boost.  While it might seem like an extra thing, it is very important to use this boost wisely early on in the game.  If a character does not have a replacement at their station, you will need to use this boost to keep them going.

Aegis of Earth isn't too hard for the most part, but some of the missions and bosses can be tricky until you get some more upgrades.  It's also really easy for me to get flustered in the more hectic missions, which then makes me fumble a lot more with the controls.  Once you get far enough in the game, you have much more freedom to place your units, which makes the game a lot easier.  However, it also removes a lot of the strategy since you can just cookie-cutter built all the cities.  It is nice since some of the default city layouts are a pain to work with.

The game is longer than I initially thought, being divided into chapters and sub-chapters.  Each sub-chapter has a scene that plays out with the characters interacting, and a few requirements to move on.  It's pretty clear what you have to do to move on.  However, sometimes the offered missions don't mesh with your objectives, so you have to complete one to get others to show up.

I'm not great at tower defense games, but I did enjoy Aegis of Earth.  My son watched me play for awhile and he really wanted to play it too.  He isn't as far as me, but also enjoys the game.  Turning sections of your city to respond to the waves of enemies is really unique and interesting.  Combining your weapons and having the powerful laser in your command tower feels like a Saturday morning anime show.  Except for the bosses, the game shows just about all it has to offer in the first few hours.  It's a game I would recommend to anyone that thinks it sounds interesting, or tower defense fans.


The Good:
New and innovative twist on the tower defense genre.

The Bad:
Until you can clear up the condemned sectors, some city layouts are terrible.

The SaHD:
The weapons merging and the giant laser cannon weapon are so cool.  Yes, I'm apparently 8 years old.

(Review codes for Aegis of Earth: Protonovus Assault provided by the publisher)
Posted by The SAHD Gamer at 9:42:00 AM