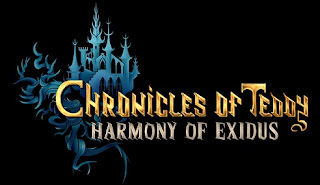 Not knowng what to expect with Chronicles of Teddy: Harmony of Exidus (it wasn't a game that was really on my radar), I was almost immediately hit with a massive wave of nostalgia as it started.  The look of the intro was heavily influenced by the Legend of Zelda, which honestly, is a great source of inspiration.  The backstory of the game is presented in a great way, by chunks of text scrolling up the screen.  If you ever left the original Zelda game run its demo/attract mode, you will know what I'm talking about.  The backstory is much longer than I would have thought though, and gives you a good idea what's going on.  Then, it pretty much drops you into the action.

I will say that visually and aurally, Chronicles of Teddy is very charming.  I love the sprite look of the game and the animations.  There are a lot of little details in the environment, especially buried in the ground.  The world has its own story, and I would love to know more about it.  The music is good too.  It really should be, since they have such musically-based puzzles and even an invented musical language.  The look and sounds of the game are easily the high point for me.

The comparison to the Legend of Zelda doesn't end with the intro, though.  Chronicles of Teddy is a side-scrolling action platformer that has a striking similarity to Zelda II.  That could go either way, depending on your feelings for that game.  The main character's attack range is ridiculously short.  So much so that it is a massive hindrance to combat.  You have to get so close to enemies to actually hit them that you will likely get hit as well.  This might be passable, but the hit detection is also off.  Meaning together, you have an even shorter attack range.  It's...just not good, from a player standpoint.  I've found the best attack is the downward thrust when jumping.  However, there are several enemies that are all but immune to it.  Of course.  At least there is a fair amount of health pick-ups strewn about the areas.

The look and awkward combat aren't the only things like old-school games.  Chronicles of Teddy also slavishly devotes its lack of tutorials to the games of yesteryear.  You quickly get your weapon, and the game shows you how to dash with a nice stone in the background.  Then...nothing.  You have to figure out everything else.  As I've said before, I don't want a game to hold my hand, but I don't want them to offer nothing.  That's just as bad.

You spend a lot of time wandering through the areas, trying to find out where to go to proceed.  You encounter a lot of puzzles, usually based around the musical language, and have to figure out what to do on your own.  While others may solve puzzles and get a sense of accomplishment, I tend to get annoyed if the answer takes too long.  The two biggest grievances I have with the non-existent help is the store and the final dungeon item.

Players encounter the store very early on, but there are no explanations as to what the items are.  I have to assume the sword and overalls will give more attack and defense.  I'm sure the sword does, but I'm not convinced on the overalls.  There's also a ring.  I had no idea what it did for 90% of the game.  I think it affects the meter that the final dungeon item uses, but I'm not sure.  There's also a heart container you can buy, but you won't know that until you buy it or find another during your adventure.  The most expensive item in the store is a spider coin.  I had no idea what they did until near the end.

The final dungeon item is a scroll.  It allows you to break a specific type of block.  Trouble is, they have no explanation of how to actually use it.  Eventually I figured out that I had to double tap down when in the air.  Would it really be so hard to put another stone in the background that showed that?  Why make me annoyed for no reason?  The item is a scroll, that the main character apparently understands, but can't communicate how?  That doesn't even make sense!

Then there's also the puzzles.  Many require you to play notes on your instrument, and mimic the notes you hear.  I'm not very musically inclined, so it's much harder for me to do some of that stuff.  Also, turn down the music volume in the options so it's easier to actually hear the notes and not the extraneous sounds.  There are doors that require specific words to open.  Problem is, the word changes.  I don't know why...the doors look the same.  There are clues to some puzzles, and many of those are obtuse.  There are either written in the background or vaguely referenced in a picture.  It might not actually be as hard as I make out, but there are at least a few that I really disliked.

The flow of the game follows a very predictable pattern.  You find a book in the library, go into the book, find a way into the dungeon in that area (usually past a guardian), find the dungeon item, then beat the boss.  Rinse and repeat.  There's nothing wrong with that, as I always looked forward to getting the dungeon item so I could explore more areas and get more treasures.  There is a fair amount of backtracking, as some required items are in previous areas.  It's pretty much par for the course for the genre though.  My biggest complaint is the save system.  You start at the start of the area or dungeon wherever you save (or die).  I realize that's the way it works in Legend of Zelda, but that was due to limitations at the time.  You are actually allowed to make the game player friendly instead of a chore!

Since the game is modeled after old-school games in many ways, it shares that old-school difficulty.  It's not insurmountable, but there are a lot of hard parts to the game.  Part of that is the large hitbox the main character has, which leads to a lot of unfair damage.  Some enemies are a massive pain to deal with, and some of the bosses are just as painful.  A few platforming sections later in the game are brutal and require pinpoint accuracy.  My personal most hated spot is one part at the end of game where you have to do crazy platforming that revolves around bouncing off of enemies and their projectiles.  It's stupid hard, but at least it's optional.  Therefore, I skipped it (after several failed attempts).

It took me about 12 or so hours to get to the final boss, but I did a lot of the optional stuff (not all the fireflies, though).  If the game were straightforward, it would be less time, but they want you to explore and sit around trying to figure out what to do, which obviously eats up more time.  Trying to do completion would run a few more hours, unless you had a guide of some sort.  There is a new game+ option, which I'm always happy to see.

While Chronicles of Teddy: Harmony of Exidus looks and sounds charming, it is devilishly unforgiving.  The game offers little help for any puzzle, has really annoying enemies and platforming segments.  There are fun parts to the game, they just are buried by the overly annoying sections.  It tries so hard to get you to stop playing it, which is a baffling choice to be sure.  Fans of Zelda II or maybe even the Dark Souls crowd might get a lot of enjoyment out of Chronicles of Teddy.

The Bad:
The combat.  Hit detection is not good and your range is abysmal.  The game offers no real help whatsoever for anything in it, which is annoying.

The SaHD:
Zelda II really should have been a much better game.  Chronicles of Teddy does a lot to improve it, but is held back by trying too hard to ape it.

(Review code for Chronicles of Teddy was provided by the publisher)
Posted by The SAHD Gamer at 5:43:00 PM