I really enjoyed the first Toukiden, more than I thought I would.  I figured Tecmo Koei's first foray into the monster hunting genre would be a bit shaky, but it was solid and felt familiar enough, yet different, from other offerings.  I ended up playing it for many more hours after reviewing it, and was very excited to finally get my hands on the sequel.  Of course, I had the carryover demo to help satiate me beforehand, so I was able to hit the ground running in the full release.

If you haven't played the first Toukiden, or read my review of it, I'll briefly cover the basics.  You play as a slayer who is tasked with defending a village from various monsters called Oni.  This involves choosing a weapon, getting some allies together, and hitting them a lot until they die.  You can then purify them, which gives you an item.  Each medium and large Oni has several parts that have their own durability.  If you hit them enough, the part will break off.  Those too, can be purified.  While you can sever legs and arms, most time the monster gets a phantom version so they can still use it to move and attack.  Those parts can still be targeted, which can aid in stunning  or tripping them, giving you a few seconds to hit them without fear of retaliation.

The controls are mostly the same as the first entry, but with a few new additions.  Square, Triangle and Circle will do different attacks based off the weapons types.  X is your dodge button, which is the same as last time.  Filling up your weapon gauge still allows you to do your super attack that will sever a monster's limb instantly.  Running and the Eye of Truth no longer drain stamina, which is nice.  Also newly added is the demon hand.

The demon hand adds a new layer of mobility for your character.  You can target an Oni with it to pull yourself to them quickly, which can help in hitting their higher sections.  You can also use them in the environment to go up ledges and across gaps.  The unity gauge has also changed to be used with the demon hand.  When it is filled, you can target a monster's part and break it, sometimes permanently.  It's different per monster, but some can be left legless, dragging themselves around to fight you.  It's really useful and cool.  At first I didn't really care about the demon hand, but after smashing off an Oni's arms and watching it walking around trying to peck me, I realized its true worth.

Mitama are back, and also slightly reworked.  They don't level up as before.  Instead, doing different things will unlock and level up their skills.  There's also very specialized skills that some have, affecting other types of mitama or certain weapon types (think of the corporate buzzword "synergy").  The second and third mitama give you new skills.  One is activated by holding R1 and pressing R2, and the other activates automatically when the conditions are met.  They have lots of new skills, too, like filling up your weapon gauge at the cost of health, or keeping you from dying when your health is out.  It took me a bit to get used to how the new skills worked, but I do like them.  Besides just reworking the types of mitama already present, a few more have been added..  I still really like my spirit type, but I'm starting to like the plunder type as well.  The command type is a bit of a let down, though. 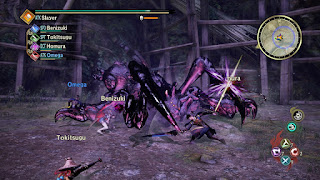 The story mode for the series went through an overhaul.  It used to be just like Monster Hunter, where there was dialogue bits in the town, and you would take missions from the counter, complete them, then repeat to press on through the story.  Now, the town has the different "ages" outside of it in a giant, connected map that you can run around in.  There are plenty of Oni, items to pick up, side quests to complete, and even collectibles.  There are also random "joint operations" where you help another slayer out (or even a Tenko).  When you complete it, the slayer will temporarily join you, effectively giving you a fifth party member.  You can encounter other player's characters in this way.  When encountering a large or medium sized Oni, there is a barrier keeping you within a certain area.  It's possible to leave the blue types, but red keep you in.  These are for quest targets, so you probably don't want to run from them anyway.

When I first experienced the large map, I though it was just a side thing to do, where you could free fight Oni and gather stuff.  It took me way too long to realize that this is where the campaign takes place.  I thought about if I liked that or not, and finally decided it was actually a good choice.  It moves it farther from the game that inspired it, but gave it something unique that works really well.  I don't know if it needed the collectibles, but I really like the new, large, connected map.

The multiplayer stays closer to its roots.  However, instead of having a map with different zones, you are basically put in the area with the target(s).  You will be in a section of the normal map, but within the red barrier area.  This makes missions much faster.  I wasn't able to find an online lobby the few times I tried, but you can do the quests offline with the story characters or a copy of anyone that you have the card for (other players, basically).

While the first Toukiden and the Kiwami expansion had story and plot, Toukiden 2 has more.  The story is a bit predictable towards the end, but the character backstories are really good.  Going through the story and some of the side quests took me 25 hours.  Completing the rest of the side quests and doing the hunting missions will rack up many more hours.  I've put on an additional 20 hours and still have more to do.  Like the first game, the difficulty isn't as high as its competitors, mostly because you can take AI with you almost constantly and they can revive you.  I had no difficulties going through the story, although some of the later monsters hit very hard.

If you are a fan of the first Toukiden, like myself, I would definitely recommend Toukiden 2.  Just realize that they have changed some things to better separate it from the crowd, which I could see alienating some people.  I actually really like the changes, and had a lot of fun playing through the story and side quests.


The Good:
Expands the game in interesting ways to further differentiate itself from its inspiration.

The Bad:
The changes may alienate some fans of the genre.

The SaHD:
I'd really like to play online with my friends, but none of them have the game.

(Review code for Toukiden 2 was provided by the publisher)
Posted by The SAHD Gamer at 12:25:00 PM