When I first heard about The Surge, it sounded pretty cool.  Action RPG where you control a man with a mechanical exoskeleton?  Sounds awesome.  After requesting it, I found out it's from the people who made Lords of the Fallen, and like that, is an attempt at a Souls game.  There's probably a proper name for the genre, like punishingly hard action rpg-lite, but everyone just refers to it by the game that started the current craze.  I'm not too into them, or good at them, but figured I would still play The Surge, simply because I'm always interested in mech and technology (mechnology?) focuses in games.

The opening scene is really good at setting the tone of the game and the backstory.  There's a nice little twist when you first control your character that I thought was super well done.  I got a little lost trying to figure out where to go after that, but once I did, I was treated to a fairly brutal cut scene that set up the main premise of the plot.  It's fairly quick and does what it needs to do.

Like others of the genre, The Surge has very deliberate combat.  The controls are wonky to me, but don't feel as clunky as similar games I have tried.  I'm not fond of melee attacks being on the shoulder buttons.  Each swing takes stamina, so you can't just hack, slash, and dodge until the enemy is dead.  Well, you kind of can, it just takes a lot longer than a typical action game.  Enemies don't often stagger from your blows, so you have to be careful when you actually attack them, so you won't get hit as well.  Most damage you suffer is pretty big, and you won't naturally heal.  You also won't pick up health packs, but instead have to use a healing item.  You can carry 3 at the start, and they are thankfully refilled at the med stations.

The med stations also serve as respawn points for when you inevitably die (another trope from the genre).  You'll also drop whatever tech scrap you were carrying.  You'll have to go back and get it if you want it.  If you die again, then it's gone forever.  This might not be an issue, but enemies respawn whenever you go back in the med stations.  Sure, this can help you grind a bit nearby, but is also a pain when you actually want to move ahead.  You can, and should, store your excess scrap at the crafting station or the medical bay.

Besides a mechanical focus, what separates The Surge from other competitors in the genre?  Executions.  Many enemies have different areas you can target.  Damaging a target quickly enough builds energy, which can then be used for a cinematic kill called an execution.  There are different ones depending on what area you targeted.  If you damage one part enough, you get a higher chance at drops from that part.  Want an enemy's weapon?  Focus on the arm that is holding it.  Want parts to build a new leg piece?  Keep hitting it and do an execution. 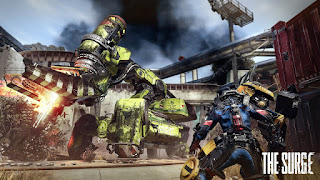 To facilitate this, there is a pretty decent lock-on feature.  Click the stick and focus on your nearest target.  The right stick will then sort of cycle through the different areas you can target.  While this is great for one-on-one, it's not that great when fighting multiple enemies.  You do eventually get a drone to help out a little bit.  Even so, switching targets is a bit of a pain, which becomes a big nuisance when also dodging attacks.  Also there were times I had trouble targeting a certain limb.  It might not have had equipment on it, but it can be hard to tell that when also trying not to get hit.

Besides storing scrap, you use it to create equipment, make it stronger, and level up your core.  Each piece of equipment has a power cost, and the total power you can equip is based on the core level.  Therefore, raising its level will let you equip more and better stuff to defend yourself and dish out punishment to your foes.  Creating stuff took me a bit to figure out, as you need both the salvage and the requisite items to do so.  So, you better learn the executions so you can actually get drops.

Since you will die a lot while learning every enemy's pattern, you will get your money's worth going through the game.  I'm a super cautious player (I save a lot), so it takes me forever to get anywhere in games like this.  For this reason, I really appreciate the shortcuts you can unlock.  I have yet to beat the game, and at my current rate, I could probably do so by the time I'm a grandfather.  Actually, that thought alone is scarier than anything the game could throw at me.

The Surge is an unforgiving action RPG in the vein of Dark Souls and Bloodborne, and checks all the appropriate boxes for the genre.  It does have a technological bend to it, and adds flashy executions, though.  Fans of that genre should definitely check it out, but if that's not your thing, The Surge probably won't convert you.


The Good:
Feels less clunky than similar games in the genre and the executions are pretty cool.

The Bad:
Any tiny mistake is paid for in lots of pain.

The SaHD:
Not like it took much, but this is waaaaaaaaaayyyyyyyy better than their previous offering (Lords of the Fallen).

(Review code for The Surge was provided by the publisher)
Posted by The SAHD Gamer at 1:38:00 PM