Shovel Knight is a pretty good game that I'm not good at.  Still, I wanted to try out the two new campaign DLCs, since they are for characters that play very differently to the titular one.  After finally getting a Switch (for reasons that still aren't clear), I figured I would try out the new version on the new system!

I first wanted to try Plague Knight.  Instead of a close range attack, he can throw his little exploding vials.  As you progress, you can buy modifiers to the vial, which give them properties.  The vial can explode in flames, send fire up walls, or throw it up at an arc instead of down toward the ground.  While these are pretty cool, it's not quick to switch to them, so I end up barely using them.  You can also charge up the vial attack, which causes and explosion that launches you into the air (they do explain this at the start of the game).  Even though he has a (bad) double jump, this gives Plague Knight a more powerful jump.  And boy, are you going to need it.

Like Shovel Knight, Plague Knight has a world map with the same set of stages, and a different "town" area.  However, each stage has been slightly reworked to fit Plague Knight's unique abilities.  This means higher ledges and farther jumps.  The vial jump does work, and charges quickly, but has a set angle if you are moving forward while doing it.  This throws me off, since I'd prefer more control.  As it is, I can do it straight up, then move slightly to the side.  As always, I would have just preferred a good double jump instead.  He also relies mostly on temporary gains to health with special potions, but they wear off after your inevitable death.  Plague Knight and I didn't get along, so I moved on to his "friend". 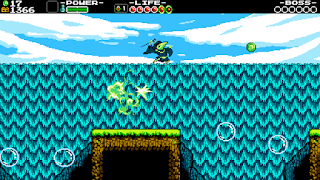 Spectre Knight was next on my list.  He swings a scythe, which means again you have a short range weapon.  His kind of floaty movement and jump seem close to Shovel Knight's, but he has a few other tricks up his bony sleeve.  One, he can briefly run up some walls.  Of course they don't tell you this, old school style, so I sat around on the first screen for a minute before figuring out how to actually move forward.  Wall runs lead to wall jumps, which Spectre can also do.  This mechanic works, but it takes some getting used to.  I had to figure out which walls he can run up, and sometimes it gets messy when I'm trying to jump off of them, only to have him reach the top, or fall off, which then messes up the jump, and has me scramble to not fall in a pit.  Again.

Lastly, Spectre Knight doesn't just swing his scythe in the air, but dashes toward nearby targets.  He will either dash up or down at an angle, which is shown on the potential target.  It's actually really cool.  Plus, this is used many times as a method of mobility to get to higher ground, or to cover a long gap.  It takes a bit to get used to (there are many times I would accidentally dash down instead of up, which would put me in danger), but works really well.  Just be careful when doing it to enemies, since the game loves to bounce you just far enough back that an enemy will still hit you...ugh.  Spectre Knight has even more remixed stages for the bosses, and they will also change their patterns to feel fresh.  I really like that he has a more Megaman-like stage select instead of the map. 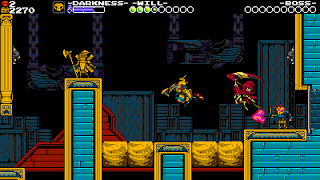 Even though I've played the core Shovel Knight before, I tried it again for a few levels.  The gender swap feature is there, so I switched everyone over.  It's not a huge difference to me, but I think it's a very cool feature that I would definitely mess around with.  It also has co-op (I don't recall if it needs the amiibo, which I do have), but I don't have anyone to try it with (my wife doesn't like these types of games).  The three campaigns also feature new game plus once they are completed.  For Spectre Knight, it combines will and darkness into one huge bar, but also constantly depletes it.  I tried for a few minutes, but it's definitely not something I'm going to actually put time into.  It's nice for people who want that extra challenge, though.

Each of the three campaigns runs about 4-8 hours, not counting deaths.  You will get a fair amount of playtime just completing what is offered, and some more if you go for completion, the feats, or any of the challenge modes.  The game can get pretty hard and frustrating, but practicing does help a lot.  There are plenty of times I would get a button or other move mixed up, make a mistake, get flustered when trying to correct it, and make it worse.  Other than that, the controls were pretty good, maybe even the best iteration of the Shovel Knights that I have played (Wii U, Xbox and PS4).  Who knew the four button d-pad could be so useful?

This was probably the best time I had playing Shovel Knight.  Partially is because I think the Switch controls really well, and partially because I've had some practice on other versions.  While I didn't really like Plague Knight's campaign, I really enjoyed Spectre Knight's.  They both use familiar level design (but not the same) with new moves to feel very much like new games.  If you haven't played any versions before, I definitely recommend the Switch version.  If you already own another version, the DLC should be coming as a free update (assuming you bought it before the specified date), so no real need to double (or triple) dip, unless the portability and really solid controls are a necessity to you.  I wasn't sure I would prefer this version, but I think it's the best one.  I'm looking forward to King Knight's campaign dropping, just to see how that mixes things up.


The Good:
Lots of new content for this version (others will eventually update for free for previous owners), Spectre Knight is fun to use.

The Bad:
Many instances of difficulty spikes.

The SaHD:
There needs to be a rule against pits on bosses...it's just mean (and dumb).

(Review code for Shovel Knight: Treasure Trove was provided by the publisher)
Posted by The SAHD Gamer at 10:14:00 AM