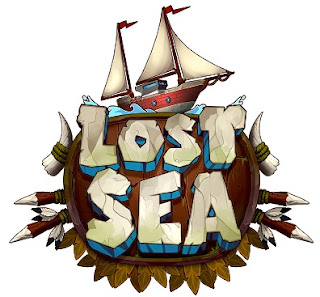 Lost Sea, from developer Eastasiasoft, is a remarkably different genre of game from their last offering, Rainbow Moon.  It is best described as a Legend of Zelda-style rogue-like game.  The game uses an isometric perspective as you make your way through several islands collecting tablets to ultimately try and escape the Bermuda Triangle.

When you start, you pick one of the characters from a list.  This choice has no real bearing on the game, it just affects what character model you use for the next few hours (or less if you are unlucky).  You will start on a tutorial island that teaches you the basic controls and combat.  Your main weapon is a machete.  Monsters tend to have simple attacks and patterns, which is good because when you die, it's game over.  Killing monsters gets you experience, but you don't level up like an RPG.  This experience is used to buy player skills.  There's a good range of stuff you can buy, from special attacks to more health and the ability to have more carry capacity.

The goal of each island you visit is to find at least one tablet (out of one to three), which will allow you to sail to another island.  The tablet has a random number that will determine how far forward you can move.  In essence, they are like dice.  Islands are randomly generated by linking together pre-existing tileset, and populated with monsters.  Many times, there will be a locked wall and you have to find the key to open it.  At the end of each archipelago, there is a boss fight, and then you move to the next area.  Rinse and repeat until you can escape the triangle.

As you make your way around the islands, you can find other stranded people that can join you.  These people become your crew, and have different sets of skills to help you, which is good, since they don't help you fight.  Instead, they cower in place when enemies come around, and tend to not move out of the way when danger arrives.  Some of their skills will allow you to create bridges, dig up treasure, or unlock chests for usable items.  Other skills are useful in battle, like more damage, more experience gain, or even a player revive.  You will want to keep around the more useful members, especially since many of the abilities stack.  Having four followers with "strength in numbers" lets you kill even the strongest monsters in two hits.  The player revive is also wonderful, since normally a death is game over.

It is difficult to keep them alive, since they seem to have a death wish.  Not only do they do nothing to dodge attacks, they many times don't follow you quick enough to get out of damage zones, especially when you have three or four followers.  They are also really good at getting stuck on the environment, and frequently I found myself having to backtrack to reclaim a straggler.  You have to invest a lot of experience to have that many, but it can be worth it.  They can be dismissed at any time, but will only follow you to the next island if they are actively following you around.  Choose carefully! 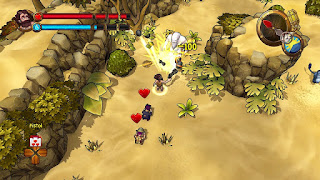 Bushes and crates around the island will give money when destroyed.  Similar to experience, money will let you get upgrades for your boat.  Some are very useful, like the one that reduces the experience cost for skills, while other seem less useful than they would appear to be.  One inexpensive skill shows you a random tablet's location on the island.  Since I try to fully explore each one, this isn't as useful to me.  However, I could see it being useful to someone trying to speed run the game (which there is unfortunately an achievement for).

A single session of Lost Sea can last a long time, which I didn't expect from a rogue-like game.  It doesn't save during a run, so make sure you have enough time to finish before you start.  Especially if you start from the beginning.  I've had a run take about 5 hours, which is crazy without saving.  Of course, if you start farther in, or don't do as well, it can end in 5 minutes.  Thankfully you can warp through any zone that you have beaten the boss for, so you don't have to do the whole thing in one run, although that can help.  If you do warp ahead, you get some experience and gold based off how many tablets you found last time, which is a decent way to offset what you are skipping.

Overall, Lost Sea is a pretty fun game.  Its randomly generated layouts give replayability, but can also make runs differ drastically in difficulty and playtime.  Crewmate AI is spotty, but you have to put up with them to make it through the game, for better or worse.  It definitely has its own style, and is worth trying for those seeking a high-stakes (in a game anyway) challenge.

The Bad:
Your crew is as necessary as they are dumb.

The SaHD:
Sad (sahd?), but true: I annoyed my wife by being late for bed one night because I had a good run and didn't end up dying until early in the morning.

(Review code for Lost Sea was provided by the publisher)
Posted by The SAHD Gamer at 12:50:00 PM