Assault Suit Leynos recently came to the US by way of the Playstation store, and is a remake of an old Mega Drive/ Genesis game (renamed Target Earth in the US).  I was surprised I had not heard of the game before, since I loves me some mechs.  Maybe it was a combination of not having a Genesis as a kid (I was a SNES guy) or that the cover looks like a guy in a suit, not a mech.  Either way, I can now experience it on a modern console.

The remake boasts better graphics, rebalanced gameplay and a few other tweaks.  The updated visuals still hold true to the spirit of the original 2D sidescroller, and look good.  Character portraits look like they came out of the early 90s and I like it.  There is some voice acting in the game, but the dialogue is kept fairly minimal, which feels appropriate.

The main menu has the arcade game, but it does help to try out the tutorials, which are tucked away in the options menu.  These help give you a basic grasp of the controls, while providing small stages for you to complete.  Strangely, they can be a bit difficult, and you can even die during one of them.  They have timed goals that thankfully you don't have to meet, but the operators will yell at you for not doing well enough.

The arcade mode offers 8 stages that are tweaked versions of the original.  Some of them are pretty hard, testing your skill and loadout management.  As an example, stage 3 took me numerous attempts.  I got through 1 and 2 the first time I tried them (I wouldn't say they were easy though), but stage 3 slammed me back down.  After learning what to do and figuring out a loadout that complimented the enemies I faced, I was able to make it through.  The following stages didn't test me as much as that, but they were still harder than the first two.  Learning enemy layout and what to bring helps a lot.  You can also change the difficulty if you so choose.

Movement in Leynos is decent, more so if you have the boost pack equipped.  This gives you a dash and a little extra on the jump.  The movement of the suit does have a bit of momentum on it, which can cause you to move a bit further than you intended.  This is really problematic around traps and pits, but not as much during a majority of the game.  There are some stage sections that are less platforming and more free-floating, mixing up the action a bit.  The mech can aim its gun a full 180 in front of it, but trying to get a specific angle can be a bit trying.

Aiming is quick, so it is very easy for me to over or undershoot the angle I want.  There is a button for locking the angle when you do get it, which is supremely useful.  Another problem I have with the shooting is the big dead area where your shots do not hit.  Sure, it makes sense since it is your whole mech, but it makes it hard to hit enemies near you (punching is an option, but still not the best).  Combine that with how loose it is about walking backwards while shooting instead of turning to shoot, and it is a recipe for trouble when trying to eliminate flanking enemies quickly.  Aiming straight up does like to pan the camera a little too far in that direction, which makes it harder to avoid hazards near your feet.  These are not huge problems, but they are annoying to me personally, and make it harder to run and gun accurately.  I was mostly used to them by the end of the game, but I still don't like them. 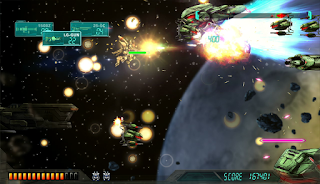 On the positive side, your mech's health will regenerate if you don't take damage for a few seconds.  This can be absolutely critical in passing the more difficult stages.  You can also equip extra armor to get a health boost, and a shield that you can use to absorb enemy fire.  While there are downsides to the shield (you can't shoot with it up, and it takes a second after releasing the button before you can), it is almost a necessity to have going through the game.  Get in the habit of relying on it early.

Before each stage, you can pick your loadout from your available weapons.  The weapons have no descriptions or stats, but at least they have a small video that shows its attack pattern so you don't just have to pick everything at some point to know how it works.  You have up to six slots, but things like the shield and booster pack take one of those slots if you choose to take them.  You unlock more weapons as you go through the stages and perform various tasks.  You can get multiple of some things, and they do stack.  This is useful for some of the stronger guns that have no reloads, but you may sacrifice weapon diversity to do so.  It's a nice open-ended system, but there are weapons that are much better suited to certain stages and situations.  In theory you could pick just about anything if you are good enough to survive, though.

Additionally, the game contains a mode that more closely resembles the Mega Drive version.  However, it is tucked in the options menu instead of the main menu.  I wondered why that is until I played it.  It's ridiculously hard.  Even though I had beat a few stages of the main game by that time, I couldn't even complete the first one of the "original" version.  It still controls and looks the same, but isn't re-balanced to be something playable.  Instead, you get a near constant stream of enemy grunts shooting at you.  I could either stay alive and constantly get pushed back, fight back and die quickly, or make a run for it and die eventually.  Yikes.  Playing that mode made me glad I didn't play the original, as it seems like a nightmare.

Being an older action game, it theoretically doesn't take more than a couple of hours to beat the game.  In practice, the difficulty adds time to that.  Plus, since some of your weapon rewards are dependent on your mission performance, there is replay value.  If you are crazy, you can even attempt to beat the Classic Mode, or unlock all the bonuses.  Each stage section unlocked is also replayable, which should help you clean up any trophies, or even practice a problem spot.  I heartily endorse selectable checkpoints in action games, and am happy to see them here.

While not a long or easy game, Assault Suit Leynos is worth playing for fans of older action games.  It's presentation is nice, the gameplay is decent and there are reasons to replay the game, other than because you blew up.  Zosaly isn't going to save himself!

No, seriously, he's not.  You have to figure out the trick to do it for him.


The Good:
Old school arcade action with a mech suit!

The Bad:
I likes to get difficult at several parts, and the aiming could use a little work.

The SaHD:
I'm really tempted to try the actual original version to see if it's that difficult.


(Review code for Assault Suit Leynos was provided by the publisher)
Posted by The SAHD Gamer at 3:27:00 PM