I still own the original Odin Sphere somewhere in my collection.  I only played it for a bit, but loved the way it looked.  Looking back, it was probably my first introduction to the fabulous art style of Vanillaware.  It was easily one of the best looking PS2 games, and on the PS4 it still looks amazing.  Environments are very detailed, and character models look good and have great animations.

Odin Sphere is a side scrolling action RPG game, and the Leifthrasir remaster has revamped the combat.  It feels really good now.  Attacking, jumping, blocking, and dodging felt very fluid and easy to grasp.  The dodge can be pretty useful, although not an "instant win" button by any means.  Launching enemies up for air combos and mixing in special attacks works seamlessly.

Since I remember having difficulty with the first boss in the original, I shamelessly put the game on easy to play.  I am glad I did.  It was really fun to tear through enemies and lay waste to big, imposing bosses.  For the most part, the controls are really responsive.  The only part I really had trouble with was Mercedes, since she plays different from the rest (although they all have unique elements).  However, there are two side-scrolling shooter sections with her, and those were awesome!

Souls can be gained from slain enemies, or from other objects in the environment.  These souls are used to power up the various skills you acquire throughout the game.  First, you have to find the corresponding crystal, which will unlock the skill.  Many skills are gained from completing battle zones, but some are hidden in an area.  There are hints on the skills as to where to acquire the crystal, so you at least have a general idea where to look for any you may have missed.  When you are looking to power up a skill with souls, it will say what the effects of leveling it up will be, and you can decide if it is worth it or not.  The skills can be assigned to different directions and the circle button, but it is possible to add more, which is cool.  You can even assign some to be midair only, giving you many options!

The other use of souls is to grow plants.  No, really.  In one of the more odd systems in the game, the characters can plant seeds on the ground, and feed it souls to have it bear fruit.  Food in the game gives experience and increases max HP, so the fruit can either be eaten or used in some cooking recipes.  While it's not bad, it feels really superfluous to grow your own.  I can't argue with the effects, though. 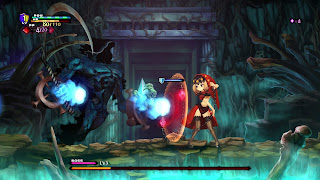 The map for each area seems straightforward, but the areas themselves are a bit strange.  The game is on a 2D plane, but many areas are circular rooms.  As you run right or left, you effectively run around the area, but don't change your orientation.  It works, but it can be difficult to know which way is which without the map.  Many areas have multiple exits to other ones, and you hold up and hit the X Button to change.  Again it's not the most intuitive, but it works for what it needs to, and I haven't accidentally changed zones when trying to do something else.

The story will follow one character at a time through their arc of six chapters and an epilogue.  It takes about 7-8 hours each, and there is a final arc that encompasses all of the characters.  They will weave in and out of each other's tales, and it can be a pain to keep them all straight.  A timeline is included, which does help, but it is still not the most comprehensive story.  The character order for the first five chapters is set.  I usually found myself not caring about some of the characters at the start, but thinking they were interesting by the end...just in time for me to be whisked off to another.

While the story is pretty good, interesting, and a little confusing, I feel it doesn't quite live up to the foundation they have set.  Several of the characters have great motivations for their actions, but they (and their resolutions) aren't explored as in-depth as they could be.  Many plot points just seem to happen, instead of having proper build-up.  I guess it's a better problem to have than the opposite (trying to build a huge story on a bad premise).  Since the characters' stories cross a lot, you will be visiting the same locations with each of them.  Plus, you will be fighting the same enemies, and many of the same bosses.  At least they are in a different order so it isn't the same thing five times, but you will start to predict what each boss will be before you enter the area.

While I didn't remember how the original game played very much, Leifthrasir does include the Classic Mode.  It will have the updated graphics, but everything else is from the original.  After playing it for an hour, I can see why I didn't play much of it.  It feels needlessly complicated and the combat lacks the fluidity and fun of the remaster.  I'd recommend trying it so you can appreciate Leifthrasir that much more.

I really recommend Odin Sphere: Leifthasir to any side-scrolling action or action RPG fans.  The game looks great (sorry if you are one of those poor saps that doesn't like Vanillaware's style), and is really fun to play.  The original is also present, so you can see just how much they changed (for the better).  The game is fun, slick, pretty, and gives you a nice chunk of playtime.  What more could you want?  As much as I like Dragon's Crown, I'm hoping that game eventually gets the same treatment as Odin Sphere.

The Good:
Well, obviously I adore the look of the game, so that is an easy good point.  Second, the combat feels really well done.  Most importantly of all, the game was really fun to play.

The Bad:
It can be a pain to keep the overall story timeline straight, even with the graph.  While going through with the 5 characters, you will see each location, enemy and boss several times.

The SaHD:
It bugs me that the shopkeeps keep throwing my stuff on the floor.  Just put it in my inventory!

(Review code for Odin Sphere: Leifthrasir was provided by the publisher)
Posted by The SAHD Gamer at 1:42:00 PM