Hard Reset Redux is a first person shooter set in a futuristic world where humans and robots are at war.  The city has a strong cyber punk and dystopian future vibe to it, and many places are run down.  All story scenes are told through motion comics between the stages, and they look pretty cool.

In some ways, the game plays like what one would expect of a first-person shooter.  Your crosshairs move with the right stick, your character with the left.  A Button is jumping, although you don't jump that high or far.  What sets Hard Reset apart is how the game handles the guns.  You have two basic guns, each with their own ammo count.  The first is the CLN gun, which uses physical projectiles.  The second gun is the NRG gun, which obviously uses some kind of energy as ammunition.  The guns have all of their ammo loaded, so while you will need to pick up refills, you don't have clips and don't reload the guns.  It still took me a bit to get used to this, as I am a habitual reloader, and would hit a button to reload, even though there isn't one.  Thanks, muscle memory!

By getting enough kills and/or picking up yellow credit pick-ups during stages, you will fill your Nano meter.  Each time it is filled, you gain one point to upgrade your guns or yourself.  The CLN gun starts as a machine gun/assault rifle, but with upgrades it can change into a shotgun, RPG, grenade launcher and mine thrower (strangely no sniper rifle, though).  The NRG gun gains a very useful short-range blaster mode, plasma mortar, rail gun and smart gun.  The smart gun is really cool, since it tracks and shoots through objects.  Each shot of the different types of guns takes a different amount of ammo, so even with the upgrades you only have two types of ammo to keep track of.

There is definitely some overlap with the upgradeable funcitons, as the initial modes and the close range modes behave similarly.  They also both have a kind of explosive launcher.  The last two of each differ, though.  Besides that and the different ammo counts, there isn't much difference between the two weapons that I could see.  Enemies didn't seem to be more resistant to one than the other, so I think it mostly comes down to situations and personal preference. 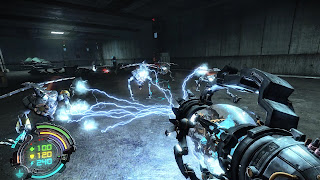 Each weapon also has an alternate fire you can purchase as an upgrade, but I rarely used any of them.  At one point in the game you also get an energy katana, likely as a nod to one of the developer's other games, Shadow Warrior.  It isn't very useful, sadly.  The third upgrade section is for your character, and is mostly for upgrading health and shields.  There is some useful stuff in there for sure, but it's not a very flashy tree, just utilitarian.

Hard Reset is very much a run and gun type fps, since only one weapon can aim down the sights (and it is really weird about it).  Enemies come quickly and tend to travel in groups.  Small ones will rush you and jump around, making them not only harder to hit, but more annoying.  Some bigger enemies will rush you too, notably the big, strong and tough gorilla-like ones.  You have a short dash that can help move you out of trouble, but it seems to get me stuck on the environment when it is least convenient.  There are also lots of things in the environment that can explode or shoot electricity to take out enemies (or yourself if you aren't careful), giving the game an arcade-like feel.

When not in a battle for your life, you walk and occasionally jump around the various locales that you character will travel to.  There are several switches to push to unlock doors so you can proceed.  Several enemy ambushes will also open the way forward.  Poking around in nooks and crannies can reveal secrets to get more credits to fuel your upgrades.  There's sadly no map, so you have to keep track of where you came from and where you need to go.  Even so, I rarely got lost or confused as to how to proceed, since the game is pretty linear.  Some stages even end in a boss fight that can make you scramble around trying to stay alive.  There were several times I had sweaty palms while taking on the harder foes.

I played the game on the Normal setting (I would have copped out and played Easy, but several of the achievements want you to at least play on Normal...bleh) and it was an appropriate level of difficulty.  There were a few more difficult parts, but they still felt like the right difficulty for a 'Normal' setting.  Health and ammo power-ups are fairly plentiful in each area.  Ammo/energy itself will even refill up to a certain point if you get low, so the game is really nice about keeping you alive and full of bullets between fights.   A majority of my deaths were not from fights, but the environment (traps, pits, etc.) 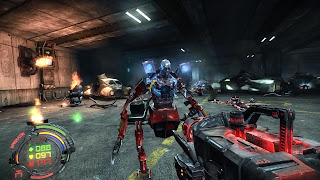 There are a few unlockable things, too.  My favorite is the artbook of concept drawings that gets filled out as you play the game.  Upon completion, you get an EX Mode, which is basically new game+, but lets you change the difficulty.  I would assume this makes the harder difficulties much more manageable.  Last is Heroic Mode.  This mode is harder than the Insane difficulty, and only saves at the beginning of the level, so you have to do each one in one shot.  While that's fine for others, it is definitely not something I would ever do.

Since the game is all single player, the meat of the game is story mode, and runs about 10-15 hours depending on how much you poke around for secrets.  However, there is also a survival mode thrown in.  There are four arenas to pick from, and power-ups around the area.  At the end of each wave, you get an upgrade point that you have to quickly put into a skill.  The mode is fairly fun, but I would of course love it if there were multiplayer (even though I don't have any friends with the game yet).  Because it is single player, I'm not sure why you have so little time to allocate your upgrade point.  You would have to already know what each point does, and what you would want to buy, since you don't have the luxury to look.  It just seems unnecessary since it's just you and not online.

All in all, Hard Reset Redux is actually pretty fun.  It is a very action oriented first person shooter with many enemies rushing you and not giving you a moment to rest or a safe place to hide.  The two guns and upgrade system is cool, giving the game a very unique quality.  It's not too hard on the Normal setting, and the length is just about right for its price.  There is even a survival mode added to give you something else to do after completing the story.  I'd recommend cyber punk fans and fps single player fans definitely try Hard Reset Redux.

The Good:
Cool upgrades that give your two guns different uses while keeping ammo and inventory management simple.

The Bad:
It can be really hard to hit the little enemies as they jump around and behind you.  Dodging enemies works pretty well until you get caught on the environment at a crucial time and take unnecessary damage.

The SaHD:
That main character really sounds like Steve Blum, but it's not him.  It also took me embarrassingly long to find the option to invert the aim.  Why wasn't it closer to the top!?

(Review code for Hard Reset Redux was provided by the publisher)