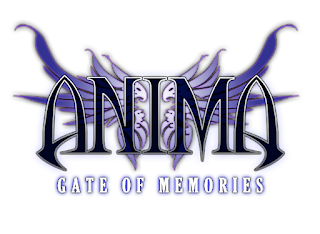 Anima: Gate of Memories is an action RPG following a young nameless girl called The Bearer and her companion as she journeys to retrieve a relic stolen from the Order of Nathaniel.  The world the game portrays seems interesting and full of lore.  Unfortunately, a lot of information is dumped on you when you start up the game.  It's not my preferred way of having it done, but there is an in-game reference for some of the things in case you get lost.

Besides all the story and dialogue, the game throws in some jokes, pretty much all of them from Ergo, the demon-like entity sealed in a book carried by The Bearer.  While this could be fine, and a few did make me chuckle, some of his jokes are pop-culture references.  They really don't fit the world the characters inhabit, and are for the player instead.  Trying to make a serious game with a serious plot is pretty much completely undermined by the out of place wisecracks about things from Legend of Zelda to Reading Rainbow.  It could have worked, but didn't.

As both the girl (who is unnamed for a reason, which is kind of neat) and her companion Ergo, you will fight enemies, jump across platforms and make your way through various locations during the game.  The square button is your normal attack, both characters have a double jump and a dodge.  Most of the other buttons can be customized with the attacks you unlock when you level up, which is cool.  The characters have separate health pools (which is a life saver), but share MP and Ki (stamina) meters.  When you level up, each gain 2 skill points to put in their trees.  One interesting thing is stat increases are gained when you purchase connected skills.  It's an interesting idea, and one that had me want to buy skills that I wouldn't even use, just for the stat points.

While the combat sounds fine on paper, the actual result isn't as solid.  Enemies attack quickly, leaving you a fraction of a second to dodge.  Most times, I had to guess when they would attack, or try to figure out the pattern for the dodge move to actually work.  There's no way I could get it on reaction, as the enemies were just too quick.  However, enemy ranged attacks are either tracking or they lead their shots, meaning you can't dodge those too early, or you will still get hit.  If your projectile collides with an enemy one, they will explode.  It's a neat idea that unfortunately hurts the player in the long run.  It can be hard to tell if yours hit or was canceled out before reaching the target (thanks camera!)  Plus, when multiple enemies shoot at you, canceling out one attack does nothing. 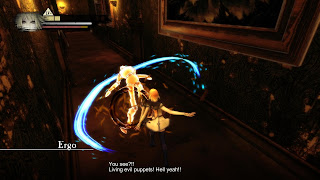 Getting hit easily might not be a problem in some games, but you take a lot of damage from enemy attacks on the normal setting in Anima.  With limited ways to heal (or really slooooooooow ways), you have to avoid damage as much as you can.  Several enemies each shooting projectiles at you can chain hit you while you are just trying to move.  It's really annoying.  Near the end, I would just spam the dash move, attack a few times, then mash dodge and repeat the whole string.  I didn't avoid many hits this way, but it sadly made harder fights easier because they were over faster.  It may have somewhat worked, but that doesn't feel like a valid strategy.  I actually bumped the game down to easy to see how much better it was.  Enemies did deal less damage, but it still doesn't make the game a cake walk by any means.

To counter balance the combat, there are also platforming sections in the game.  The jumping isn't that great, which can lead to some missed jumps.  But don't worry, since that will just cost you some precious health and send you back to the beginning of the section.  Oh, and any enemies in that section will respawn, too.  And in case you were wondering, you can totally dodge yourself off a ledge while trying to avoid enemy fire.  Even if you are being careful, small ledges and decent dodge ranges don't work well together.  Seriously, just spawn the player on the previous ledge and don't bring the enemies back...like pretty much every other game in the last 12 years.  There are several places that have platforming sections you can just stare at and not want to do at all, filled with timed platforms, spikes and other such annoyances.

Once you complete the first stage, the game opens up.  You are in a hub world that connects to the various stages you have to complete to beat the game.  There are three first areas, then two more later.  While this works for the most part, it can feel very aimless.  There are parts that are easier, but the game won't point them out for you.  Plus, while most areas have a way to teleport back to the hub, you are either stuck going through a lot of an area or running the long way back out if it's not the "right" one.  The areas do have numbers associated with them, but they confusingly don't match the preferred order.  Also, the map sometimes lists things incorrectly, which doesn't help.

The game is also really dark.  Not in the humor or tone sense, although there is that too, but they really need to turn the lights on.  Well, except the one area in the temple that is way too bright.  Other than that one, many areas are very poorly lit.  Sometimes it is intentional, like the nightmare area.  However, this starts to physically hurt my eyes after awhile.  I have to have the lights off to even see some of the places in this game.  There are some really stylish and pretty locals, but that gets marred by making the player platform and fight in almost pitch-black situations. 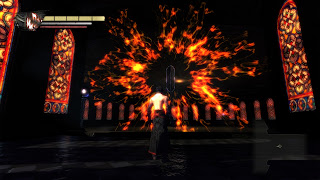 If none of that stuff bothers you, the game takes about 10-15 hours to complete, especially with all the retrying of the harder parts.  There is a new game+, which is always nice to see, some cool extra costumes, and multiple endings.  There are secrets to find and even a hidden boss.  The puppet mansion has prisoners that you can free to get rewards, but you cannot free them all in one run, so that's another reason to replay the game.  Having the game a decent length and giving some good replayability is welcome in my book, even if other parts of the game don't work out so well.

While Anima: Gate of Memories has an interesting premise and world, it is also chock full of things that make you not want to play the game.  The combat is frustrating when taking on multiple opponents (or really strong ones), the platforming and camera are painful, and they need to add a brightness option to make the game visible at times.  Did I mention the grammatical mistakes?  It's not a horrible game, as there were several points where I was chugging right along, but the cheap hits and pitfalls will likely dissuade many people from playing it more than an hour.  The more I played it, the less I wanted to, which is not a good thing for a game to do.


The Good:
Decent length for its type of game, new game +, multiple endings and secrets to uncover.

The Bad:
Fights against multiple opponents, strong opponents, or shoot-happy foes.  Oh, and a lot of the platforming sections.

The SaHD:
If they ever patch the game, I really, really hope they include a brightness option.  I wasn't kidding when I said it is a dark game.  I had to play with lights off, and even then it hurt my eyes after awhile.  It also makes on of the extra costumes kind of pointless, since you will have trouble seeing yourself, too.

(Review code for Anima: Gate of Memories was provided by the publisher)
Posted by The SAHD Gamer at 12:37:00 PM