Prior to release...ok, prior to getting a review code for it, I had not heard of Hidden Dragon Legend.  It's an action adventure game featuring intense sword fights in a fictional world grounded in ancient Chinese culture.  What could go possibly go wrong?

The story starts off really slow.  Literally.  You have to drag yourself through a room just to get started.  It feels like it takes forever to get to the part where the story is actually starting, which isn't really the best way to get people interested in what's going on.  Then it starts jumping forward through the passage of time, as if to make up for the beginning.  It's just really odd pacing that didn't mesh with me.  It also lays on the mysterious stuff really early on, dropping tons of characters and dialog that doesn't make sense until much later in the game.  Speaking of dialog, it's not that great either.  I'd have to say it's more comically bad than ear bleeding, though.

As you make your way through the various stages, you will have to fight many enemies.  Your sword has a normal and strong attack that are used for various combos.  You can also jump, which may help you hit the airborne enemies.  There's a dodge that costs stamina, so you can't spam it.  At one point in the game, you will also get throwing knives to give you a weak distance attack.  Under your health are five circles that fill up as you damage enemies.  These allow you to use a few special moves.

Unfortunately, the fighting just isn't that good.  The special moves are costly and take way too long to fill up.  The weak attacks work on normal sized enemies, but are almost useless on the bigger foes.  The jump just doesn't feel right when trying to hit the flying enemies.  It's super easy to get hit, even when trying to dodge.  Plus, the dodge doesn't seem to have invincible frames, making its usefulness suspect.  A block would have been really useful and welcome.  Enemies also jump around, making it a hassle to gather them up and hit them. 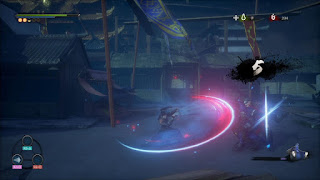 And those are the better parts of combat.  The bigger enemies frequently have super armor, so they can ignore your attacks and retaliate.  They don't seem to follow patterns, so you can't take advantage of openings as much as you should be able to.  They can also attack way too fast for how durable and strong they are, leaving you no time to dodge.  It's just a huge pain to fight them.  It's even worse when they come in multiples, or with other enemies.  In fact, fighting anything in groups other than the weakest grunts is a pain.

So the fighting might not have worked out so well, but what about any other aspects?  Well, the stages themselves are usually okay.  There are hidden and hard-to-notice offshoots that house extra chests.  You will gain a few different weapons and abilities as you go through the story, so some of these are not available your first time through the stage.  It's pretty easy to go back, too.  Just select the stage from the menu and you can replay it.  This is also good for getting some extra healing potions.

While you have a double jump (yay!) and a dash that works in the air (double yay!), the platforming isn't the best.  There are precise jumps, and the jumping didn't feel that great to me.  Sometimes the double jump just didn't want to activate.  The grappling claw you get partway through the game functions pretty well, though.  I found it easy to aim while using it for platforming.  However, in combat, it was just the opposite.

Overall, I don't think Hidden Dragon Legend is that good.  The platforming is okay, and the style of the game is nice, but the fights are what drag it down.  Evening out the difficulty and adding some polish would help the game a lot.  Even doing more with character and skill upgrades would have been a plus.  As it stands, you could easily skip it.

The Bad:
Fights have uneven enemy difficulty, which kills the fun.

The SaHD:
A super responsive dodge would make a lot of the fighting problems disappear.

(Review code for Hidden Dragon Legend was provided by the publisher)
Posted by The SAHD Gamer at 2:31:00 PM