When I first started Battle Chasers: Nightwar, I only knew it was an RPG.  The visuals hooked me instantly.  The story animation and art is done really well.  In the game itself, the character designs, enemy models, and environments look spectacular.  It really looks like the 3D modeling of a comic book.

There's a reason for that.  Apparently, Battle Chasers was actually a comic book series from the late 90s to the very early 2000s.  Well, according to its Wikipedia page, the final(?) three issues are supposed to come out after the game, so I guess I shouldn't say "was" a comic book series.  Also, it seems Joe Madureira, the original creator is involved in making the game.  I guess that's why the game looks so good.

You might be wondering why I learned all of this.  The simple reason is it relates to one of my few problems with the game.  The story in the game is mostly self-contained, but the characters already knew each other.  It was obvious that I was starting in the middle of their tale, and I wondered if it was some property that I didn't know about.  It turns out that it was.

Anyway, the world map is fairly big, and you move from place to place on set paths.  Some places have alternate paths, which sometimes avoid enemies, and sometimes lead to extra places.  Fights are clearly labeled, and there are chests and gathering points on them, too.  If you want the enemies or gathering points back, you can either complete a dungeon or reload the game, which can be really useful to do.  The town shops are also accessed from this map, which took a bit of getting used to.

Once you find and enter an exploration area or dungeon, you will have more freedom of movement.  They also contain treasures, items to examine, and wandering monsters.  Each character gets abilities that you can use in these areas.  Some are just generally helpful, like the robot's heal.  Others can be used for exploration, like Gully's rock destroying punch.  Pretty much all of them can be used when making contact with an enemy to give you an edge in combat, too.  I would like it if they weren't as limited as they are, and only staying at an inn replenishes their uses.

Battles are tried and true turn-based fun.  Your speed, or in this game, haste, determines when and how often your turn comes up.  At first you get what appears to be a normal set of actions, but as you level up, there are some nice surprises.  Besides having a normal attack, there are alternates.  For example, Garrison also gets a move that does less damage than a normal attack, but applies bleed.  There are some special moves that will get an added benefit from that, on top of the fact that the target will suffer damage over time.  Calibretto, the healing robot, has a normal move that removes debuffs from a party member.  Status ailments are considered debuffs, so this is a very useful move.  Too bad I often want him to attack instead.

The other cool and unique concept is overload.  When you do a normal attack (or some other actions), you will build up overload.  When you use a skill that takes MP, you will use overload first.  So, it's basically extra MP.  Sadly, it usually doesn't stay with you after combat, but it does mean you can never actually run out of MP.  If you do, just attack and you'll have some more!  Now you know why I want my healer attacking, so I can do some healing for free.  I don't always get to take advantage of overload, but I really like it. 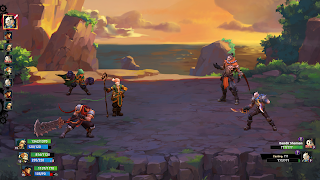 Battles themselves are sometimes harder than I would have thought.  Enemies hit hard, and it can be hard to keep up with the healing.  Even so, I did go a long time without needing to resurrect somebody.  If enemies are weaker, you can just mash attack on them, but as you go further in the game, and especially during the boss fights, you will want to plan out your moves.  Since battles are turn-based, you have the time to do so, and I suggest you use it.  Some fights are linked, where you will have to fight them back-to-back with no break in between.  These can wear you down, but are good for building up overload.

Each character can equip a weapon and armor (unique to each person).  In addition, there are 3 slots for a ring, necklace, and trinket (not unique to each person).  These obviously change your stats, usually for the better.  There are plenty of times that equipment gave different bonuses that the previous piece, so I had to choose which I thought was better.  I guess my biggest complaint with the equipment is that it seems to be random loot drops from chests, meaning you may get too many for characters that don't need it, and not enough for those that do.

There is a crafting system, so you can eventually make some equipment yourself.  It might be good, but it feels really inconsistent.  You can't just make the stuff you have recipes for, you also have to be at the right place.  Strewn about are different facilities that allow you to make stuff.  There's several of them in dungeons.  While that can be useful, it's just strange.  Really, I'd just like a more convenient place to do it, so I could actually play around with it and see if the crafting system is actually worth using.

Besides equipment, another way to make your characters stronger is with perks.  These act as passives, and there are various effects.  Some increase various stats, like dodge, attack power, or stamina, while others can make your active skills better.  There are also a few that just do generally useful stuff, like a small heal at the end of battle, or being able to keep a little bit of overload.  I really like those types of perks.  My favorite thing about them is that they aren't permanently assigned.  As far as I could tell, you can freely reassign the points (outside of combat) as the situation dictates.  Some are better for random encounters, and maybe you have others for a tough boss fight.  While I don't think they really mentioned the perks, except for a loading screen tip or two, it is something you should get into as early as you can.

One other personal problem I have with the game is the saving.  It's a full auto save environment.  There are multiple save slots, so you can either have multiple playthroughs, or have other people play on your profile, but each only really has that one auto save.  While it saves frequently, and I haven't had any issues with that, I would love to be able to make a hard save.  Mostly for my piece of mind, but also so I can play around with the crafting stuff to better understand it.

Besides the main quest, there are a few other things to do.  There's a fishing mini-game, because of course there is.  It's fairly simple, and therefore not bad.  You can also do some side quests, and even special hunting quests.  Add in the arena fights, and well, you have a fairly standard set of extra stuff to do in an RPG.  Even so, it's not really a knock against the game, just nothing new.

I really liked playing Battle Chasers: Nightwar.  The art is cool, the game is fun, and the battles are just difficult enough to get you to think.  I'd like some more polish in the information areas though, as there were things that I only learned about from random loading screen tips.  RPG fans, I strongly encourage you to play it.


The Good:
A solid and fun turn-based RPG with enough character and unique mechanics to not feel old.

The Bad:
A few small issues: only auto save, crafting system is a bit weird, and I actually learned stuff from the tip screens.  I'm not really sure why that last one is a negative.

The SaHD:
I think I'm going to check out the comic books at some point.  I'm interested in these characters.

(Review code for Battle Chasers: Nightwar was provided by the publisher)
Posted by The SAHD Gamer at 12:03:00 PM