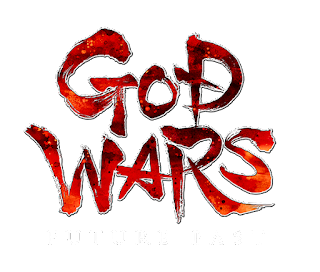 God Wars: Future Past was definitely a game that sounded interesting to me.  It's a grid-based strategy RPG with heavy influence from Japanese lore.  It adheres to the tenants of the genre - each turn you can move and do 1 action, damage and accuracy from behind is better, and other such things.  Once everyone has had their chance to do something, it moves over to the next turn.  While being faster doesn't let you move more than other units, it does allow you to move sooner in a turn.  MP starts empty, but you get a percentage every turn.  This isn't so good for fighter classes (since their MP max is low), but great for casters...especially when you give them the MP+ passive.

There are also two types of treasure chests strewn about the maps, plus hidden items.  One unique aspect is gathering materials.  There are sometimes special places that you can gather herbs, or mine ore, but you need an appropriate skill to do so.  Side quests use the story mode stages, so you have plenty of opportunities to get these items, since you can repeat side quests.  The game's story is broken up into 4 chapters, with several episodes (battles) each.  Focusing on only the story battles should run you about 35+ hours, but much more if, like me, you do all the side quests.  I found it best to not do all the side quests when first available, since it made my progression feel sluggish.

Now for the job system.  Ever since the first Final Fantasy Tactics (and Final Fantasy V), I've loved that idea.  God Wars has it too, and I really like what they've done.  Each character can equip two classes, a sub and a main, plus they always have access to their default job class.  That's a total of three job classes, all giving active skills to use.  The amount of JP earned is reduced for each successive class, but that's a good compromise for such a system.  Sadly you can only equip three passives, which doesn't feel like enough when there are so many good ones (increased MP and JP are amazing).  It's probably for balance, because having too many passives would probably make certain combinations overpowered.

The story is pretty much fully voiced (at least in the PS4 version) story scenes, some of which are animated, and some others are more in a comic book style format.  It's dual language, so you can set it to English or Japanese.  Be warned that the animated scenes don't have subtitles.  I found that some lines (in English) were really quiet, and were overshadowed by the music.  Not terrible, but kind of jarring and strange.

I set the game to normal, and it wasn't really that hard.  Sure, some battles were harder than others (especially bosses that got multiple actions per turn), but none were super difficult.  I'm not sure if that's because I play lots of SRPGs, or if the game isn't very difficult in and of itself.  Also, some skills are far better than others, so learning those helps.  One gripe I have is that enemies get better skills.  One example is their magic damage reflect.  Theirs seems to reflect all magic damage, but my skills, even at max, don't reflect nearly that amount.  Accuracy can feel uneven at times, making misses at >85% more common than they should be.  You can save in battle, which is nice, but you can't save scum to make those attacks hit.  I tried it a few times, and it sadly didn't change.

God Wars: Future Past is a very good, solid, and most importantly, fun strategy RPG.  While it doesn't do anything revolutionary, being able to have multiple job classes at one time is a great start.  I definitely recommend the game to SRPG fans, especially fans of the classic Final Fantasy Tactics.

The Bad:
No cross save.

(Review code for God Wars: Future Past was provided by the publisher)
Posted by The SAHD Gamer at 2:06:00 PM