Idea Factory International continues to bring their titles to Steam, so I recently checked out the PC version of Superdimension Neptune VS Sega Hard Girls.  I previously checked out the PS Vita version, which I enjoyed quite a bit, and I expect this version to be in line with all the others.

Instead of starring Neptune or one of the other (non-Vert) goddesses, this one focuses on IF and her new friend Segami, as they battle to repair time and keep the history of Gamindustri safe.  Along the way they will meet new characters modeled and named after various Sega consoles (remember when they made those?)  Dungeons are mostly what you would expect: 3D environments to run and jump around in, with enemies patrolling around.  Now you can also climb ladders, monkey bar swing across rope lines, and crawl through small openings.  There's also coins and baseballs to collect, and item boxes to open.

Touching an enemy in the field (or getting to a certain point in story scenes) will start a fight.  Combat also looks familiar, but with some new tweaks and twists to keep it fresh.  You still move around a small plain to aim your attacks, but now each action fills part of your action gauge.  The more you do, the higher it goes, and the longer your next turn will take to come around.  If you fill it into the red zone, your turn ends by itself.  Normal attacks fill it a small amount, but there's also a charge attack that fills it the rest of the way, but you get a strong attack for the sacrifice. 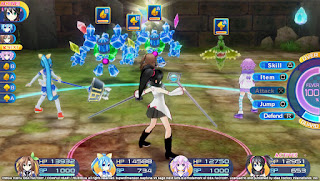 Special skills require SP to use, which builds up as you attack in battle.  This is great because you can always build it up, but bad if you want to switch around your characters.  I usually ended up just saving it for boss fights.  A new addition is the Fever Meter.  When it is filled, grab the star that appears and your characters can continuously take turns while it lasts.  This prevents the enemy from having their turns, and, like SP, is best used on bosses.  Combat as a whole was pretty fun, and the different systems gave it some strategy.

Progress through the story is made by undertaking missions.  There's a limit to how long each quest will hang around, and that number decreases whenever a quest is completed.  This means you are going to miss some quests, since there are more than you can do.  You have to be a little careful of what ones you choose, since some will be very difficult or impossible on your first run through the game.  There is a great new game+ that lets you keep just about everything.  This make it easier to run through the game subsequent times.  My first run on the Vita version was under 25 hours, and I ended up going through the game a second time.

I probably sound like a broken record with a lot of my PC reviews, but the game ran fine on my i7/16gb machine.  I didn't encounter any weird problems in the few hours I played.  The keyboard and mouse work ok, but I far prefer the controller for this style game, and the Xbox 360 pad worked great.  Fans of Neptunia games should definitely check the game out.  Superdimension Neptune is a solid JRPG.

The Bad:
Bosses can and will require grinding.

The SaHD:
I'm never getting a Vert-based game am I?

(Review code for Superdimension Neptune was provided by the publisher)
Posted by The SAHD Gamer at 1:02:00 PM