After a successful launch on the 3DS over a year ago, Azure Striker Gunvolt has come to PCs via Steam, and brings improvements to address some of the problems players had with the initial release.  It returns the mid-battle dialogue, voices and updated translations.

Gunvolt himself is a lightning septima, hence he can generate electricity and attack foes with it.  He can also dash, jump and shoot his gun.  Although his gun does damage, the amount is very little.  Its main purpose is to tag targets.  Normally, Gunvolt's electric powers are a field around him.  However, if you use it while a target is tagged, the attack will track them and do a lot more damage.  This is his main method of attack, and you can do it as long as you have EP, the semi-circular meter under Gunvolt.  It can refill decently fast on its own, but you can also quick charge it by pressing Down twice.

Additionally, if you get hit, it deducts from your EP first, as long as you have enough.  This can only happen if you actively aren't using your EP.  Unfortunately, this means in order to defend yourself, you have to give up most of your attacking prowess.  Also unfortunately, the game seems built upon your ability to abuse this mechanic.  Finally, Gunvolt also has SP skills, denoted by the card-like icons in the lower left.  These are slow to charge up, but offer special effects, like a powerful attack or heal.  The heal was very useful, and the one that I used 90% of the time.  Too bad it isn't a very good heal. 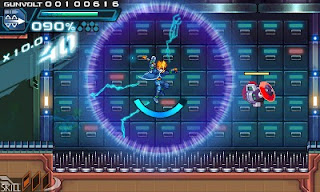 There's a good variety to the ten stages, as some have some sort of gimmick that uses Gunvolt's lightning abilities, whether they are used to move platforms, operate switches, or float with magnets.  These parts are kind of neat, but I feel they were used just a bit too much.  To get through all the areas, it takes about 3 hours, and more if you want to get all the hidden gems or complete the challenges.  You are likely meant to grind the stages since the extra levels would make things easier.  Unfortunately, you will also fight all of the bosses at least twice.  Other than that, there is a speed run mode, and endless attack mode, and an easy and hard difficulty modes to give you more bang for your buck.

Killing enemies gets Gunvolt experience, which is used to level up once certain experience thresholds have been reached.  This gives him more HP, so it is possible to grind a bit and get more health to make the game easier.  Plus, every time you complete a level, you play a bonus game to gain materials.  There is a very rudimentary crafting system in the game, and the gear you make can provide you with some bonuses or extra abilities.  Trouble is, you either have to grind out the stages multiple times and complete some optional challenges to get enough loot to actually make something by the time you are nearly done with the story.

The difficulty level of Gunvolt feels closer to the old school, but with some new sensibilities like checkpoints.  I did die a few times, but not as much as similar games from back in my youth.  The stages definitely had parts that were difficult, but the bosses felt more like they relied on cheap hits to get damage.  More than one of them has an instant kill move that is nigh unavoidable.  Fun.  I can definitely see room for improvement, as the goal is to get through the stages without getting hit rather than just get through it.  It's pretty hard, at least for the bosses.  It's not overly hard to not take damage (most times), since the prevasion anti-damage shield helps out a lot, but that won't help you keep your score if that is of importance to you. 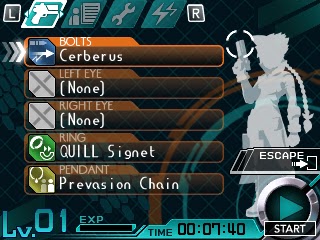 Since the game was adopted from the 3DS release, there are a few strange holdovers.  For one, the menu in-between missions is presented as closely as possible to the original, so you have two smaller screens on the screen.  I get why that is, but it does look weird to me.  Second, Gunvolt's SP skills are mapped to F1-F4.  I don't see a way to map them to something much easier to hit on the controller.  As it stands, I would have to move my hands quickly and accurately to the keyboard, because there's no way I would play a game like this without a controller.  Seeing how responsive the Xbox 360 controller is with this game, I see no need to try otherwise.  One last holdover from the 3DS release would be exiting the game.  In the game, there is no menu option to exit the title.  Instead, you hit ESC, which just immediately closes the game out.  It works, but it's jarring and I didn't see that listed in the controls, so it took me a bit to realize that's what exited the game.

Azure Striker Gunvolt can be a fun game.  Blasting through the levels, tagging opponents and using lightning powers is a lot of fun.  The difficulty is uneven at times, and bosses are plagued with cheap hits to mar the overall experience.  It's still worth playing for side-scrolling action game fans, and old school fans of the Megaman franchise.


The Good:
Familiar type of game with some very unique mechanics and different ways it is used in the stages.

The Bad:
Relies too heavily on the prevasion mechanic to avoid health damage.  Bosses can have some ridiculous attacks.

The SaHD:
I can't tell if the different shot types you get just aren't very useful, or if I'm missing what makes them so good.  The standard shot worked the best for me through the whole game.

(Review code for Azure Striker Gunvolt was provided by the publisher)
Posted by The SAHD Gamer at 2:05:00 PM