Azure Striker Gunvolt 2 brings back the run and gun action of the previous game, but adds a much appreciated extra - a whole new character.  The formula is similar to last time, you pick a stage, run through it trying not to get hit, and beat the boss at the end.  Copen, the added player character, will fight the same bosses, but in a different order, giving players a different experience in his journey.

Gunvolt is an adept with lightning powers, and his abilities are near identical to those from the last game.  As such, his gun isn't his main source of damage.  It still does a tiny bit, but its main purpose it to tag enemies.  By default, he can tag up to three enemies (or even stack them on fewer targets), which will focus his lightning attack onto them.  This attack is much stronger than just using his voltage field, but that has its own uses too.  Since it is a field around him, it can destroy physical projectiles, making a useful shield.  It's also used to power occasional things in the environment.  Using his powers drains his EP meter that you can let refill slowly on its own, or press down twice to charge it up quickly (but you are open to attack during this time).

Gunvolt can also dash and jump, but cannot dash in the air without an item (bummer).  If he still has power left in his EP meter, taking a hit will drain some of that instead of doing health damage.  This is paramount to your survival in the game.  There are plenty of times where you can't avoid damage, and have to use the shield to avoid HP damage.  When he defeats some of the bosses in the game, Gunvolt gets a different shot type for his gun, which can make it easier to tag some enemies.  Lastly, Gunvolt has three SP marks in the lower left of the screen that allow him some special attacks.  The default is a strong attack, and he quickly learns a healing one.  This was very useful to me, but it is a very weak heal.  There are other SP skills he learns, but I didn't end up using any others, since I needed the heal so often.

Copen, Gunvolt's rival, is also playable in this game, and plays differently than his blue counterpart.  For starters, his gun does more damage, and is his main source of attack.  Copen also has an air dash.  However, his air dash consumes a refillable resource called Bullits.  These also power his anti-damage shield, called prevasion, like Gunvolt's.  There are a few times where I ran out of Bullits when air dashing around, causing me to fall in pits.  One of the hazards of trying to rush through a stage combined with old habits.  If you dash into an enemy, it marks them so Copen's attacks will track the target.  This is a really useful function that I discovered on accident, since I didn't see the game point it out.  It is hidden in the Help section, but I doubt I would have looked there if I didn't stumble upon it by accident. 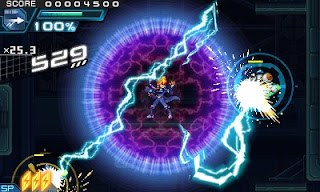 Where Gunvolt gets different shot types from bosses, Copen can somewhat mimic their attacks.  This is yet another meter he has, but it really feels natural to me as an old Megaman player.  In addition to the nice attacks and damage they cause, Copen can still use his gun while using the boss attacks, meaning he can dish out some serious damage in short order.  It's one of the big reasons I had much more fun using Copen than Gunvolt.  The other was the difference between their prevasion shields.  Using Copen's takes away from your mobility (air dash), where Gunvolt's takes away from your attack (can't use the voltage field).  However, I had the same problem charging both of their respective meters.  Pressing down twice to charge didn't always register, regardless of which pad I used to control them.

Overall, the game wasn't too hard for me.  There were a few tricky spots, especially with Gunvolt, but I was able to persevere through them.  With Copen, I was able to dispatch all the bosses without dying, thanks in part to his playstyle and stronger heal.  Admittedly, I think the game would be better if you could dodge all the attacks the bosses have.  There are several that hit the entire screen, or enough of it to effectively do the same thing.  It goes against my Megaman/Monster Hunter instincts, but you are supposed to abuse the anti-damage shields for both characters to get through without taking damage.  Still, I'd rather all attacks be avoidable.  Especially since most bosses have cheap hits that are hard to survive even with the shield.

Gunvolt also has some RPG elements.  Killing enemies gives experience that will level you up.  Levels grant more health, so the game becomes easier as you play through it.  Also, there is equipment that you can craft.  The pieces necessary to craft them come from the bonus game at the end of every level.  It takes a lot of luck or grinding to get most of the pieces.  By the time I had finished the game, I only had enough pieces to make one thing for each character.  Copen's was a skill chip I really wanted, which is nice, but if I got that far without it, I probably didn't need it at all.  If you do want them, then replaying levels and attempting the challenges is the only way to go.  Too bad you have to replay a stage to attempt the challenges for it.

The missing mid-battle dialogue was such a big deal after it was removed from the first game.  While on one hand I am glad to have it included in Gunvolt 2, on the other hand it is useless.  If the game stopped so you could actually read it, it would probably be better.  As it stands, your character banter while the action is going on, meaning you either take lots of damage to try and read it, or just ignore it.  To make matters worse, the dialogue box and character portrait takes up valuable screen space, making the fight even harder.  It's sadly better to just turn them off. 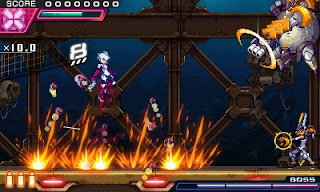 It only takes about 3 hours to make it through one of the characters' story, so double that for the whole package.  Even so, it's a game that I can see myself replaying, just to get better at fighting the bosses, and figuring out which weapon is best for each.  I wouldn't want to replay the levels just for material drops, but that would happen as I was re-playing through the game, and it is certainly an option to other players out there.  There are also challenges to try and complete for extra items, but you unfortunately can't get most of them your first time through the stage.

Overall, Azure Striker Gunvolt 2 is a very fun game.  It is very reminiscent of the old and awesome Megaman X games, while being different enough to not be a copy.  The game isn't very long, but there are reasons to replay the stages, and having two different characters is always a plus.  The prevasion shield is a useful mechanic, even if I think the game relies on it a bit too much.  I had a ton of fun playing as Copen, so I hope he continues to show up in the game.  I would definitely recommend the game to fans of the first Azure Striker Gunvolt, Megaman games, and side-scrolling action games.


The Good:
A fun and challenging side-scrolling action game that I can see lots of potential in learning enemy/boss patterns in order to improve.  Playing as Copen was a lot of fun.

The Bad:
Have to replay stages/grind to get drops to make equipment you don't really need.  Some enemy attacks unavoidable.

The SaHD:
The ice/slippery level is really annoying.  Can we as a gaming community just stop doing these kinds of levels?  It was cute the first few times, back on the NES, but they just aren't fun.  Do any players actually enjoy them?