The Magic Circle: Gold Edition starts with a very interesting premise: you are playing inside a video game that has been stuck in developmental hell for many years, and still isn't finished.  Inside you meet an AI program that will assist you through it and try to find out what's going on.  Maybe you can even finish what was started.

The tale it tells is almost too real for any fans that have followed the outside development of many games, weaving together rabid fanaticism, well meaning but flawed individuals, and outside influences that can bring games to ruin.  I don't want to spoil too much, but the story behind the story is well done, and while it is placed in an extreme light, does feel realistic enough to be a scary social commentary on gaming.  The voice acting for the characters is really well done, too.  There is a fair amount of swearing midway through the game, and I did have to shoo the little ones away while I was playing.

The game world is very unique in style and substance.  Since the game was built upon an earlier, scrapped game, there are two worlds twisted together.  One is a fantasy world that is muted of most colors (save around the creatures and yourself), looking like a black and white manga instead of a fleshed-out game world.  The other is an old-school space adventure, looking very much like the first Doom.  The merging of three dimensional and sprite environments somehow works really well. 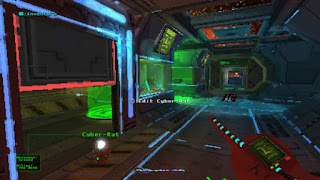 The game is played from the first-person perspective.  You can jump (with triangle, which is kind of weird to me) and...well, you can't attack.  At least not directly.  One of the "choices" the developers of the game within the game made.  However, you can use your health to 'trap' a hostile being and then re-write its behavioral code.  Once you get used to how everything works, it's actually really cool.  You can set the creature's allies, enemies, movement and attack type.  In fact, you will need to.  Once you get a few recruits, you can then use them to attack any other hostile entities.  Once an enemy is 'ghosted' (out of HP), you can re-write it as well.  If you want, you can have a whole army follow you around, but I wouldn't recommend it.  It gets really clustered.

The freedom the game allows is pretty good.  That corpse doesn't do much.  If you take the 'ground' movement from another, you can then have a zombie follow you around.  Give him 'melee' so he can defend you, and the game gives him a beam sword.  Give him 'flame attack' and he will have a flame thrower on his chest to use on your foes.  Once you get flying, you can give him a way to take to the skies.  Taking these parameters from objects and defeated foes is key to getting through the game, while giving you lots of room to experiment.

You will need many modifiers to get through the various puzzles in the game.  Some are just for fun, or alternate ways to solve situations and make your way to the end.  There are many spots to refill your life (or warp to), since you will need it to trap enemies and resurrect any of your allies that fall in combat or to the environment.  Anything that you have at least went into the brain editor of can be summoned to your side from the map.  Again, it takes some getting used to, but it is different from any other game I have played, and it's fun, too. 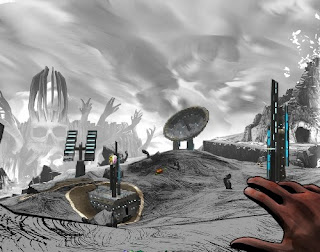 Even though there is combat, the game isn't really hard.  It's more like a long puzzle or adventure game than an action game.  It can actually be pretty relaxing at times.  Many solutions are open, with several ways to solve it.  That's key to making it better than many puzzle games (to me, at least).  While it in theory would give some replayability, that and collecting trophies is about it.  The game is pretty short, and can be completed in about 5 hours or so.

I liked The Magic Circle and enjoyed playing the game.  It is a bit short and doesn't offer much replayability, but it was very much worth playing.  The world and story it crafts are well done.  The gameplay itself is imaginative and unique.  I'd recommend playing the game to any fans of puzzle or adventure games, or those that enjoy thinly veiled critique of the gaming industry and culture.  It is very much an experience that will not be soon forgotten.

The Good:
Being able to re-write enemies and objects to solve puzzles in a myriad of ways make this game a fun and unique experience.

The Bad:
The game is short (about 5 hours or so) and doesn't offer much replayability except for trophies.

The SaHD:
Without spoiling it, the parts at the end were pretty cool, and this game likes to play around with perceived notions about how a game can work.

(Review code for The Magic Circle: Gold Edition supplied by the publisher)
Posted by The SAHD Gamer at 12:16:00 PM