Hyperdevotion Noire: Goddess Black Heart is the PC version of the previous PS Vita release of the game (review for that here).  While the other Neptunia games are RPGs, Hyperdevotion Noire is a strategy RPG, like Disgaea or Fire Emblem.  Instead of the usual 3D representations of the characters, the game uses a chibi (big head, small body) style.

If you have played other SRPGs, then the battle system should be largely familiar to you.  Your movement is on a grid with ranges defined by # of panels.  You can move and use an action during your character's turn, and repeat for all of your characters.  The enemy will then be able to do the same with all of their units.  Normal attacks can be met with a counter attack, and the damage and chance of each is listed when selecting a target.  In that respect, the game hits all the right points.

Since this is a Neptunia game, the main CPU girls can transform into their goddess forms.  While it only lasts a few turns, each one can move and attack twice while it is in effect.  It adds some more tactics to battles, since you can use it early to try and rush, or save it to turn things around.  The other characters don't get access to these, but they have many other uses that can be just as important, such as healing or ranged attacks.

Noire will require some grinding, but not for every map.  There are side quest maps that can be done multiple times, and you will likely need to.  At this point, that is par for the course in Neptunia games, but bears mentioning each time for the benefit of any newcomers.  Other than that, my biggest gripe is with some of the levels themselves. 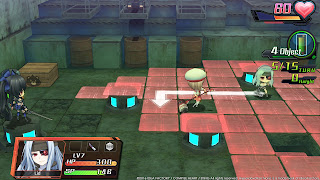 To set itself apart from other SRPGs, there are gimmick tiles that have various effects.  Some are moving platforms to get to other parts of the stage, but most are hazard tiles.  Any CPU forms are flying and are not bound by these, but in any other instance you are stuck dealing with them.  If you hit a damage one, it will automatically end your turn.  Gee, thanks!  As an even bigger PITA, enemies don't seem to be affected by them at all.

I played the game for a few hours, and it ran fine on my i7-4790/16GB ram PC.  Since the game isn't action-oriented, it played just fine with the keyboard and mouse.  The standard button config was a bit strange to me, but again, you don't need to find anything really fast so it wasn't an issue (they are listed at the bottom of the screen most times).  I tried it out with a normal Xbox 360 controller, and it worked just as well.  Make sure you set that you are using a controller in the menu though.  I had not, and while it worked fine, it liked to make my mouse cursor jump to anything I would normally have to click.  A minor annoyance, but worth mentioning.

While not the best SRPG I've played, Hyperdevotion Noire is fun.  It's not without its faults, but I'd recommend it to fans of the Neptunia series or SRPG fans.

The Good:
Competent SRPG, and I really like the new characters based off of various game series.

The Bad:
Like other Neptunia games, there will be some grinding necessary in HD Noire.  My biggest complaint is with the gimmick tiles in battles, since they don't seem to affect enemies.  That's bunk, dude.

The SaHD:
So after a Noire game, we get a Blanc one.  After Blanc, we get...Iffy.  What?!  I think you forgot one there...
Also I think the names are getting longer the more the series goes on.  I'm scared what will be the titles of these games in a few years.

(Review code for Hyperdevotion Noire was provided by the publisher.)
Posted by The SAHD Gamer at 3:40:00 PM