Continuing off of the hack and slash gameplay of Hyperdimension Neptunia U: Action Unleashed, the girls are back again in a new adventure.  MegaTagmension Blanc + Neptune VS Zombies is the spiritual successor to the earlier spin-off, this time (mostly) starring Blanc.  That name is also a mouthful.  It adds one new character (Tamsoft), three characters from other Neptunia games, and new enemies.  IF is really on a role adding new enemies to the Neptunia games, and I like it.

Thankfully the mission structure has been revamped to be much easier to follow.  While it is more linear, it bothers having a story, so I'll take the change.  The story is also very fitting for the series.  Blanc and the other CPUs are all going to school.  Neptune has founded a film club and wants to make a movie to help save the school from closing at the end of the year.  She is starting to make a zombie movie, and enlists Blanc to write and direct it.  Trouble is, an actual zombie outbreak occurs while they are filming.

So, what's the best solution?  Just film your scenes around that, using the actual zombies as cheap stand-ins for the low budget film.  Yes, the idea is silly, but a funny one that likes to lampoon the zombie movie genre and still have its trademark Neptunia style.  In a great addition, some of the girls are really bad actors.  So you have voice actors doing a good job of playing a character who is then badly playing another character.  Cue the Tropic Thunder-level Inception stuff.  Plus, there are alternate scenes for some of the game if you pick specific girls, which is really cool.

The story scenes don't always match up to each other, or really flow as a movie, but I feel like that's part of the charm.  Many low budget and similar projects easily suffer from that, so it feels legit.  I would like the "movie" scenes in the game to have a better indication that they are for the film and not the game's story.  While you can usually tell from the dialogue, some visual cue (like a different text box or some kind of border) would be something I'd want to see.

Since the game is a hack and slash action game, there is a lot of fighting groups of monsters and bosses.  The square button is your main attack string, and the triangle button is a stronger attack.  Block is on the R Button while the L Button is for centering the camera and locking on.  The lock-on seems finicky most of the time, but it is very useful for bosses when it does want to work.  Your characters also have a jump that doesn't seem very useful and a dash that...also doesn't seem very useful.  They can help you break the recovery time at the end of a combo, but I've only needed that on one character (poor Tamsoft), so I rarely used them.  Of the two, the dash was more helpful in combat.

Holding the R Button and pressing a face button will give you one of the character's special attacks.  They are all available from the start, unlike the previous game where they were granted at certain levels.  The special moves are now on a cooldown system.  There is a meter next to your character's portrait.  When it is filled, you can use one of your special moves.  While it's nice that you will always have access to them given enough time, I far prefer the older system of attacking to fill several meters.  Some of the special attacks were best used every few seconds, not once every 20 seconds or so.  Hopefully the next game can strike a good balance between the two systems.

The meter above a character's health allows them to transform, use a super move, or the double team attack by holding both shoulder buttons and pressing a face button.  Super moves are no longer only usable when transformed, although you will get a slightly extended version if you use it then.  It still uses what is left of the meter, though.  The double team attack is really useful for damage and getting a lot of hits.  Unfortunately, boss enemies tend to easily fall out of them and the super moves.  The times you need it most are the times it fails the most.  I hope that changes soon.

Offline fights can have up to two characters per level.  Switching isn't that hard and happens quickly.  I rarely needed to use it, but did use it a few times for fun.  Thankfully the experience earned at the end of the stage is the same for both characters, a good improvement over the previous game.  At first the game felt a little loose, and combat didn't feel as refined.  I discovered that this was because I was playing on the PS TV and not the Vita.  Once I tried it on the Vita, the problem disappeared.  It was still fully playable on the PS TV (don't click the sticks down though), but it didn't feel as good. 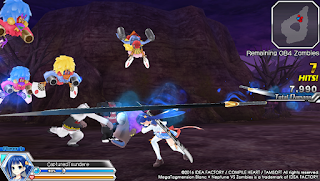 When you level up, you gets some skill points that can increase one of four stats (HP, Pow, Def and Technic).  You earn a set amount per level, and have to spend them in the required amount per increase.  Since you can't spend less than 100, I don't know why they don't just give you 1 point instead.  Plus, you can't see how many points you need for the next increase until you have enough.  Not a huge deal, but a strange choice that really feels like an oversight.  The Technic category only gives an effect every few levels.  I'd think it would be easier to not have the extraneous levels, and just make each level cost more points.

Each character gets multiple weapons that are recolors to tell them apart.  They will increase your attack, which is already much higher than your defense.  Each weapon can have some weapon mods on them, which provide some bonuses.  Neither the game nor manual explain how this system works.  If it were intuitive, or something I could understand just by looking at it, that might not be a problem.

As far as I've experienced, you can place the mods on the weapon, and each costs a certain amount of memory.  Each weapon has a memory limit (with stronger weapons curiously having much less) that dictates the number of different mods you can place on it.  That part mostly makes sense, but then each mod has a use limit.  I'm not sure why.  While I've checked and they do go down, sometimes they are refilled.  Either that or I've used it up, which shouldn't be the case when it says I have 30 uses left and have maybe done 8 or so levels and it's (back?) up to max.  No previous Neptunia game had something like this, so it's a bit confusing.  Some of the bonuses aren't even that great, so it feels like you can just ignore the whole system completely.

Unlike Action Unleashed, you don't get any other pieces of equipment to wear.  Accessories are now just cosmetic things to put on your characters.  Honestly, the previous system in the last game was superior in those respects.  You do get more costumes though, by collecting various items as you play the game.  You just get them during battles (maybe based on the rating), so it isn't some collectible you have to seek out.  It's cool that they are gaming systems that unlock costumes for the characters, but some of the choices are odd.  They have all the Playstations (1, 2, multiple 3's, and 4), but no Wii U or Xbox One?  At least they have several Nintendo systems to partially compensate...

There are 12 story chapters, and each has 1-7 missions in it.  Each mission is really short, but you will probably have to grind experience at some point and there is replayability in unlocking the extra cut scenes.  Most levels aren't very hard, but bosses seem to be harder than the suggested level.  The online provides some nice extra content with its own set of missions.  Their suggested levels start low enough that you can use new characters for them, and I found them good levels to grind on.  I really like that online has every character unlocked from the get-go.  You can rank up to unlock more missions, but I'm not sure how, other than just doing some missions.

Overall, I'd say MegaTagmension is an improvement over its predecessor, provided you play it on the Vita.  The mission structure is improved and the new characters are a nice addition (Iris Heart in particular is fun to play).  I'm not too keen on the lowered defense and changing accessories from helpful equipment into fashion pieces.  The weapon mod system needs either some reworking or explaning.  There's also a few instances of text overrun that I'm sure will get patched out.  MegaTagmension is a fun hack and slash game for fans of the Neptunia series that I enjoyed playing.


____________________
The Good:
I liked HD Neptunia U: Action Unleashed, so a sequel with more characters is always welcome.  Story is a great idea, and the structure of it is much improved from the previous game.

The Bad:
Some of the reworked mechanics (weapons, accessories, special moves) just didn't pan out.  Time to revert!

The SaHD:
Speaking of Vert, I'm miffed she isn't getting a spinoff game next.  We just had the third CPU, but now it goes to Iffy?  I realize who the developer is, but come on...

(Review code for MegaTagmension Blanc + Neptune VS Zombies was provided by the publisher)
Posted by The SAHD Gamer at 6:59:00 PM