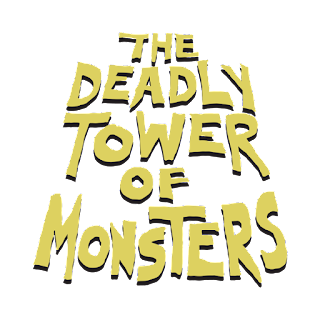 The Deadly Tower of Monsters is an attempt to recreate a cheesy, low-budget sci-fi movie from the 70s and make a video game around the director's commentary on the re-release of the movie.  It's a great idea, and it's pulled off well, which makes the whole thing work.

One of the reasons it works so well is because the developers committed to the idea of the game.  There are times when you can see the strings attached to flying things.  When the heroes die, they become stunt dummies.  The weapons you pick up are clearly mundane objects that the prop department added things to in order to make it more sci-fi.  Enemies are guys in suits or even stop motion monsters, and they look like it.  There's even a grainy filter on the game that simulates a VHS tape (this can be turned off if you are not cool enough).  Putting the VHS filter on the audio makes it kind of warped in a few places.

The other good part of the presentation is the director's commentary itself.  He's kind of a stereotypical chauvinistic ass, but that's the point.  He boasts about the terrible working conditions he put people through.  He tries to explain away the inconsistencies of the movie.  He stumbles over $30 words while trying to sound smart.  To top it off, he'll even throw in a few chauvinistic remarks.  Even though all the actors do good work, the director is easily the star of the game.

Primary, Deadly Tower is a 3D action game.  Your characters run around the different areas, ascending the tower.  You get a melee attack and a ranged attack, and two weapons to swap between for each.  There are over 20 weapons in the game, split between the two attack types.  Each weapon is also upgradeable with cogs you pick up.  The ranged weapons have an energy meter that depletes when you fire them, and it refills over time.  It's fairly standard for the genre, but I really do like the upgraded weapons, since they tend to have some silly comment on them related to what it is, or how silly and sci-fi they look.  The melee upgrades in particular tend to make the weapons a little more goofy to fit with the theme of the game.

The best defensive maneuver the heroes have is a dodge roll.  However, if you use it right when an enemy attack would hit you, it will instead be a parry that will knock the enemy back and cause some damage.  Doing it to a projectile attack will send it back at the attacker.  Thankfully it is not necessary to master it.  While you will get hit a lot, especially in melee combat, you don't usually take a lot of damage.  Enemies will frequently drop cubes that restore a little health and larger health pickups are scattered around the map, so I rarely ran low on health.

Each of the playable heroes will get some powers that help with either combat or exploration.  They all share a force push to knock enemies away and one other that I won't spoil.  Dick's unique skills are a landmine that can clear out certain rocks and a dash.  Scarlett gets a electric barrier and a speedy run.  Robot gets a time slow field and a chain lightning bolt.  The way the powers are used to open up other areas and get some of the collectibles is well done.  Even if you need to switch to a particular hero for a certain part, there are many handy "sleep chambers" that let you do so.

While there isn't a ton of it, there is some platforming in the game.  It's not too taxing, save for one part later in the game.  If you happen to fall in the water at the bottom, a fish will eat you and you return to the nearest shore, with some commentary from the director.  Falling off of a ledge would be slightly more problematic, but you soon get an air teleport that will warp you back up to the ledge you fell from.  That comes in really handy when grabbing a few collectibles or falling through the rings.  It's actually a really nice feature that I now wish was in other games.  You also get a rocket pack that will allow you to hover for a short amount of time, or help break your fall so you don't die.  It has no upward thrust, so it can't be used as a double jump unfortunately.  I have used it to skirt around a few obstructions.  I'm not sure if that's intended, or just a happy coincidence.

The game isn't too long, taking about 4-5 hours to beat.  If you go looking for the collectibles or the trophies, then it's closer to 8-10 hours.  The touch pad is a convenient teleport to jump around the map to gather up anything you missed.  There isn't much replay value after that, since none of the trophies are missable.  The game isn't too hard, either.  The only times I died were from falling too far and the jetpack not saving me.  Once or twice I was low on health during a fight, but I never actually ran out.

The Deadly Tower of Monsters is a great idea for a game that the developers went full in on.  As a result, I think it was pulled of pretty well.  I laughed at several parts, even though my 8 year old had no idea why I was laughing.  The action of the game is fairly standard and the only real problem I had was the weird collision near many of the obstacles.  When in tight quarters, the player model tended to get stuck in a jump animation and it can be tricky to get out.  It's only about a 5-10 hour game, depending on if you are going for the platinum trophy or collectibles.  Fans of cheesy sci-fi movies should check the game out for some laughs, as I was pleasantly surprised at how fun the game was.
Posted by The SAHD Gamer at 2:07:00 PM