Legend of Heroes: Trails in the Sky SC (PSP) Review 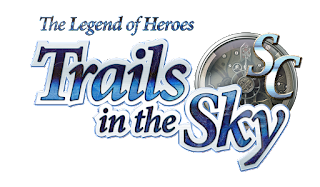 Legend of Heroes: Trails in the Sky SC is the second part of an RPG trilogy for the PSP.  While it may seem odd to release a PSP game now, players can carry over some progress from the first chapter, and PSP games are fully playable on the Vita, so it does make sense.

It also looks fairly good on the small screen.  Graphics-wise, the game seems reminds me of one of those great 90s JRPGs.  The backgrounds are 3D and the camera can be rotated in many areas, allowing you to look around.  The characters look more like rendered 3D models than the straight-up polygons of the scenery.  This makes them stand out in a good way.  Being a fan of older games, and considering the limitations of the base system (PSP), the graphics look nice.  There is also a PC version on Steam, if you want it to look as good as it can.

The game quickly gets going when Josh, the main character's childhood friend/"brother"/secret crush takes off... and it is revealed he was actually working for a secret, evil group of people.  Yeah, so I really should have played the first game, as this probably spoiled some big events in it.  Our main hero, Estelle, is off to find and save Josh.  You can import a save from the previous game or just make a new one.  It obviously won't transfer everything, but you get some items and Estelle's level is the same if it was between 35-40 (otherwise it will be bumped up or down accordingly).  Since I haven't played enough of the first for it to matter, I didn't transfer anything.  Just be aware that this review is written with that in mind.

The game's story is really good.  Estelle's personal goal of finding her friend intertwines well with her professional goal of stopping an evil organization.  The characters are well fleshed out and believable, and you can easily get attached to some of them.  The dialogue and localization is top-notch, which gives extra marks to any RPG.  My only real issue is the lack of refresher of the previous story.  Given the time between the games, and the fact that you can play this without the first, some kind of optional recap would have been really nice.  As it stands, there is a chunk of stuff in the beginning that was tricky to figure out.  Like the battle difficulty (discussed later), this drops off as the game progresses, but considering much shorter and closely released games beat you over the head with a recap, it is disappointing to not have one in a game with such a great story.

Second Chapter is an RPG, so you will be fighting many battles.  Battles take place on a grid, but it's not a strategy RPG.  You can choose to move on the grid if you want, but if you select an enemy to attack and it's within your range, you will just run up and hit it.  If it's not in range, you will move as close as you can to it.  Since normal attacks send most monsters back a bit, it can be a problem hitting them out of range of the rest of your characters.  You can also cast magic, called "arts", but they will not cast instantly.  The turn order in the top left of the screen shows when the spell will take effect, so plan accordingly.  There are a good number of monsters that are much more affected by magic, so you can't just gomp stomp your way through every fight.  At least since enemies show up on the map, you can often times avoid the fight if you need to.

Each character also has unique abilities called Crafts.  These take a resource known as Craft Points (CP for short) to use, and tend to be pretty powerful or useful.  CP is unlike AP (Art Points) in that it is gained from taking or receiving damage.  If the CP meter is filled to at least 100, then a character can cash it all in to use an S-Craft, which is effectively a super move.  These can also be cast when not your turn to jump into the turn order.  Since some turns have effects like healing some HP or a guaranteed critical, it can be very useful to cut in line and take that for an enemy.  I really like the Craft system, since CP are a fairly renewable resource to use when you need it.  Using it with a beneficial turn effect has really helped on some of the harder fights in the game.

Your characters will get a special piece of equipment called an orbment that allows them to equip quartzes.  These crystals affect your stats, but also grant magic spells based off the element(s) it grants.  Each orbment has the same number of slots, but arranged in different lines.  Elements in the same line are added together to grant bigger and costlier spells.  I really like this system, as it allows you some refinements in your character.  Granted, I'm not a fan of the crystals that both increase and decrease stats (attack goes up 6% but defense goes down 3% for example), but most are good.  It's really easy to switch them around to make sure elemental spells are covered, too.  This is also a way to get a chance to apply status ailments on your attacks, which can turn the tide of battle quickly in your favor.

The difficulty in battle feels a bit unbalanced at times.  Fighting enemies on equal footing will likely result in you taking a lot of unnecessary damage.  If I got a preemptive strike, on the other hand, the battles were almost too easy.  There are also plenty of enemies with status ailments on their normal attacks.  These can be ridiculously deadly, so any advantage you can get is a plus.  Normal fights did get slightly easier with time, so the initial hurdle may have been because I didn't transfer a save into the game, as the starting difference would peter out over time.  Special fights against quest monsters and chest enemies can be tricky though, since you cannot get a preemptive strike.  Enemies are pretty powerful, so smart use of items and abilities will get you through them.  Strangely, boss fights were not as hard as I would have though.  Maybe they were easier since I did a lot of fighting while doing all of the side quests, or maybe they are more balanced than others.

While the world Estelle and company run around in is nice, I do have a slight problem with it.  I'm not the best with directions, and I'm thankful that towns have a mini-map so I don't get (as) lost.  Dungeons do not usually have maps for them, making it much harder to navigate.  I can eventually make my way through them, but I like to make sure that I've hit all the side paths and gathered all the treasure lying around.  The lack of a mini-map makes that much harder.  Since you can rotate the screen, I would have to remember cardinal directions rather than "I took the right path first".  Again, this might not be a problem for other people, but I would have really liked mini-maps for the dungeons.  You can save anywhere in dungeons (and towns), though, and you have plenty of save slots, which is always great in my book.

The game is also really long.  Remember RPGs about a decade ago when they ran 80 hours instead of 20-30?  Trails in the Sky SC is closer to the former.  There are 8 numbered chapters, a prologue and a finale.  The prologue itself took me 4 hours, which is crazy long for what in most games is a cut scene or two and a tutorial battle.  Other chapters ran me about 8 hours on average.  I am a completionist, so I pretty much did every side quest I could.  Unfortunately, it is easy to miss some by progressing the main story too far.  You could cut down on playtime if you ignore most of the side quests, but you might need to do some grinding to compensate.  Either way, just going through the game will take a long time.

Legend of Heroes: Trails in the Sky SC reminds me a lot of the PS1 era RPGs.  It has a good story with good characters, but could do more to introduce them to new players or those that don't remember the entire first game.  Otherwise, it is a fun RPG with unique battles.  I like the craft/art system, and the super moves are useful and fun to watch.  The game is really long, too, so you easily get your money's worth.  Fans of JRPGs, especially ones from the turn-based golden age, should definitely check it out.  If possible, I'd recommend playing the previous game first, then jump straight into the Second Chapter.
Posted by The SAHD Gamer at 12:32:00 PM