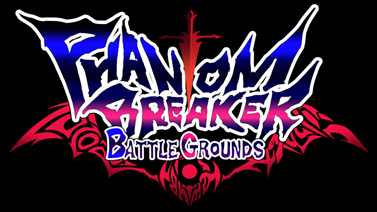 Recently, the spin off game Phantom Breaker: Battle Grounds was released on Xbox Live Arcade.  When I first saw the look of the game, I knew I had to try it.  You may know I'm a fan of retro graphics and sprites, and that's what this game has.  The look harkens back to the Super Nintendo era, and I really like it.  The models animate beautifully, so there are some nice modern amenities added to the retro designs.  Battle Grounds is really fun to just look at.

What if retro graphics aren't your thing?  Is there good gameplay to make you want to play it?  If you like playing side-scrolling action games or beat 'em ups like Final Fight, then the answer to that is a resounding "yes!"  The game plays a lot like an old (and amazing) game called Guardian Heroes.  You move around and attack enemies with 3 different standard attacks that can be chained together to make combos.  Special moves can be purchased with points obtained at level ups to give you even more options to damage your opponents.  One awesome aspect is that you can respec your character anytime you are on the skill screen.  This makes it a lot easier to fight, since you can go for a skill that will help, or just beef up your stats.

I really like using the special moves after different attacks to make up combos.  Attack a few times, then use your uppercut move to get more hits and send the opponent flying.  Launch the enemy into the sky at the end of the combo and hit them with a projectile as they are falling.  These are the kind of things I love to do in these games.  Luckily the fighting is fluid enough that I can do this.  You get a little "super" meter under your health so you can use powered up "EX" moves for more damage.  You also get a move that will slow down all the enemies so you can mercilessly pummel them.  It doesn't seem as useful as it should be, and if you do it while the enemy is attacking, it can be harder to use it effectively.  Really, the combat in Phantom Breaker: Battle Grounds is a lot like a fighting game.  Given that it is a spin-off of a fighting game, this makes sense. 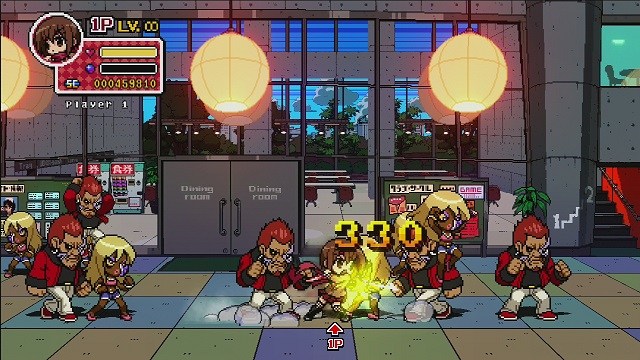 There are only a few stages in the game, but they are fairly long.  Factor in replaying stages to level up so the bosses are easier (if playing by yourself) and the length of each game is pretty good.  It's very reminiscent of beat em up arcade games, so it's not going to be a 20 hour play, but that's good.  You start with 4 different characters and others are earned from beating the game, so there is lots to do if you want to keep playing (which I definitely did want to do).  Unlockable characters cannot be used in Story Mode, but that's fine since you get all the stages in Arcade Mode with none of the cut scenes.  There's even a versus mode, if you really want to see how your fighting measures up to everyone else.

The story of the game isn't amazing, but it gets the job done.  There seems to be legit reasons why you go to each stage and fight each boss.  There are a multitude of characters you run across and fight, but you don't get to know much about them.  I get the feeling that people who played the original Phantom Breaker will know who these people are.  The cut scenes are voiced, which was unexpected.  The only thing I don't like about the cut scenes is that they cannot be skipped.  So, when you die on a boss, you have to watch them banter before you try again.

Yes, I said "when" you die on a boss.  They are hard.  Through normal progression, some of them will stop you cold.  Starting out on the normal setting, I beat the first two bosses without dying, but the third, Cocoa, destroyed me.  She's a little claw-wielding maniac hyped up on pixiesticks.  The bosses attack relentlessly and are strong enough to really hurt your health bar.  I eventually leveled up enough to get past her... until she showed up again.  Unfortunately, you fight Cocoa several times, and even on the easy setting, she is a berserker trying to tear your face off.  Besides the bosses, there are several fights that can get difficult, mostly from a large group of enemies (or large enemies) that just barrage you.  The "emergency escape" maneuver can save you, but those parts can still be tricky.


The best option to get through the tricky parts is by bringing a friend, or finding a partner on Xbox Live.  Just like Final Fight and Guardian Heroes, this game is even more fun when played with others.  While I've only joined one online game so far, there was no lag.  I really like that each character keeps their own screen, so all your running around won't constrain the other characters to the same visual area.  It was also easy to resurrect the other person when they did die (although I died much more than they did).  It was lots of fun, and I'm definitely recruiting my wife to play some too.  She loves playing games with me, so I'm sure she'll like this, too.

If you like achievements, the list for Battle Grounds isn't too bad.  Most are obtained from playing the game, although there are a few that will require luck and skill.  There are some bonus stages that may take a few tries to get the associated achievement, but it's far from impossible.  Beating hard mode will likely be the hardest for me personally, so I'll probably get some friends to do that with.

I like the character designs.  I really like the look of the game.  I love the gameplay.  Honestly, this is one of my favorite XBLA games that I've played.  It's just fun, and with several characters to use, I have many reasons to play.  I had enough fun that getting destroyed by over-caffeinated Cocoa didn't deter me from trying until I got past her.  I'm even looking forward to getting the DLC eventually, so I can try the new character.  If you are a big fan of Final Fight and Guardian Heroes, go try this game, it's a lot of fun!