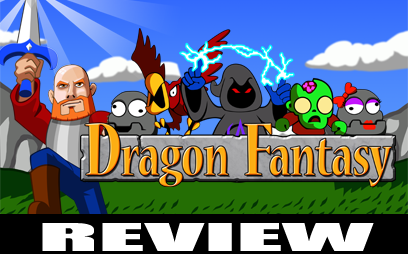 Dragon Fantasy: Book I was recently released on PSN to scratch your old-school RPG itch.  I really like and appreciate the retro look, as you will likely know if you read some of my other reviews.  The world map really reminds me of Final Fantasy (yes, the first one), but the battles feel more like Dragon Warrior.  My favorite part of the overall look of the game is that you can switch it between an 8-bit and more of a 16-bit look.  I really like options like that, and it's fun to switch between them.  The monsters don't look much different, but the map and people do.  As a nice bonus, the simplistic, retro music also changes!

While I did like a lot of the visual and music/sound, there is one part that bugged me.  When you are poisoned, the menu and text bubbles all become green.  It's normally a nice blue (like Final Fantasy II/IV) or black (if you turn off "enhanced mode"), so this change is jarring to me.  It also makes it harder to decipher what you are selecting, since the highlighted text also changes to a shade of green.  I appreciate that there is a change when you are poisoned, but I'd like something a little more subtle.  If you have multiple people in the party, it's not readily apparent who is poisoned until the game tells you they lose health.  To make this kind of thing worse, when you are low on health, it changes to red.  It's the visual version of the super annoying beeping when you are low on health in the Pokemon and Legend of Zelda games.  I would like it better if you could turn it off or somehow lessen the effect.  Also, the screen flashes red when you step on damaging terrain, which makes me wince a bit when I do it.

As an old-school RPG, you can probably guess how the game plays.  There are random encounters and you select your moves from a menu every turn.  Since I like turn-based RPGs, I can't complain.  Although, I feel like I miss a lot in combat.  You can see your accuracy in the status screen, but it sure doesn't feel like the 80%+ that the game says I have.  You can easily miss multiple times in a row, which has actually gotten me killed in the game.  A note here: a few days after launch, there was a patch that recalculated the accuracy, effectively raising it just enough to make it fine, but I wanted to mention the pre-patch accuracy impressions too.

Getting defeated in Dragon Fantasy isn't too bad.  It's very much like Pokemon.  You lose half of your money and go back to town.  I will admit it is annoying to lose money, since I barely had enough until the very end of the chapters, when I didn't need it.  I quickly slipped back into old habits and would spend time grinding whenever I hit a new town.  Even then, it took a chunk of time to raise the money to afford all the upgraded equipment.  Usually I would buy a few and make do.  In some towns you can store money in a bank, but only in increments of 1000.  Yes, lower increments would have been nicer, but I also understand that they need some penalty for getting killed.

As a fan of parodies, I appreciate the humor in the game.  Most enemies have names that are funny or references to things like Stealy Dan (he's a thief, get it?), Audrey, and Obligatory Orc.  They have funny attacks too, like when the Son of Rock Monster yells "You're not the boss of me!"  Probably my favorite part is the text when you defeat the monsters.  "Stealy Dan broke up" and when a werewolf becomes "a cold, scared, naked guy" are two funny examples.  These little bits show lots of care for the little parts of the game, since even the pallet swaps of different monster have different attack names and text when they are defeated.  There's even a few direct references to old RPGs thrown in for good measure.  Heck, even the title is a cross between Dragon Warrior and Final Fantasy.  The humor won't be for everyone, but I really like it.

The game is an RPG, so you will get a lot of playtime out of Dragon Fantasy Book I.  There are 3 different main stories to play and 1 additional "intermission" story.  The first chapter is Ogden by himself, and hence the hardest chapter, and clocks in at around 8 hours.  The second chapter is the easiest, since Anders can recruit a party, and is about 2-3 hours.  The third chapter, about the thief Jerald, is about 3-4 hours.  The bonus Intermission M is about 1-2 hours total.  Fans of Minecraft should like the intermission, since you can finally have a creeper help you instead of just ruining your hard work.  Total playtime is about 15 hours, which is pretty good for $10.

The story is pretty good, too.  I'm a fan of multiple perspectives, so I really like that the three stories intertwine and tell pieces of a larger whole.  The Intermission is likely just a joke chapter and not part of the main story, though.  If you are after trophies, they are pretty easy to get.  Most of them are obtained by playing through the various chapters, with only a few being missable.  Getting those will likely be the only reason you replay the game.

While playing, I did encounter a few bugs.  Mostly, they were game freezes and crashes.  Originally, after playing for thirty minutes or so, the game would freeze.  This was quickly patched out, but that patch causes a freeze toward the end of Chapter 3.  You can reinstall the game and not install the patch to get past that.  Also, there is a freeze after the credits for the Intermission chapter, but it does not affect getting the trophy.  You will definitely want to update the game when you play, but be aware of these issues.  Given how quickly the first patch was released, it is obvious that Muteki Corporation are working hard to fix the issues, and I appreciate that they clearly care about their product.

As much as I like the game, I do have a few minor gripes.  True to old school RPGs, you can only walk.  A dash button would've been nice for those long stretches of walking.  According to one of the developers, Adam Rippon (on GameFAQs of all places), the next patch will be adding a run button, so hopefully I can cross that gripe off the list.  Other gripes include no world map, no inventory or spell sorting and the high encounter rate.  The encounter rate is nice when you want to grind, but annoying when trying to make your way through a dungeon.  These didn't keep me from enjoying the game, though.

I was pleasantly surprised when playing Dragon Fantasy Book I.  I love the retro look and gameplay, as it really takes me back to when I was a kid.  If you played RPGs in the late 80s and early 90s, I'd recommend trying Dragon Fantasy.  I'm not sure how much younger gamers would get out of it, but my 6 year old is trying to play it after seeing me play it.  It's fun and has me looking forward to Book II, which I'm hoping will make its way to the PS3!

Bonus Tip:  In Chapter 3, after recruiting Ramona, steal from the guard south of the Thieves Guild by "talking" to him from behind.  You will get 100 gold but have to fight him.  When you win, you get 100xp and another 25 gold.  If you go into a nearby building, it will reset him so you can do it again.  This was the most efficient way to get money (and xp) in Jerald's story.  You will get the high end equipment in no time!
Posted by The SAHD Gamer at 2:30:00 PM