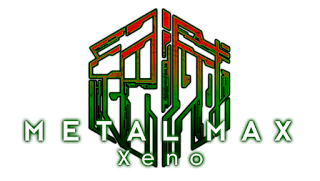 Metal Max Xeno is an RPG set in a post-apocalyptic wasteland.  Humans created robots that turned on their creators, nearly wiping them out.  As one of the last remaining humans, jump aboard your tank and take your revenge!

The setting isn't unique by any stretch of the imagination, but it's not one I can recall in an RPG.  It's like a mix of Terminator and Mad Max, and I really like it.  When looking the game up, I was surprised to find out that there have been several Metal Max games, dating back to the NES.  I didn't think I had heard of the series before, but apparently Metal Saga on PS2 (which I played some of and enjoyed) is under its umbrella.  Thankfully, you don't need any prior knowledge to enjoy this game.

Upon starting, you are given a small tutorial dungeon to learn a few mechanics. I thought it would have started with more story, but it did not.  After gaining your first tank, you find a town, and are quickly thrust into your first quest.  In fact, you can't even enter the building until you finish part of the quest.  You can restore your health and ammo by visiting it though.  This gave me the impression that the game was going to be light on story, and mostly a dungeon crawler.  That isn't really the case.  It does have a lot of dungeon crawling, as you fight in dungeons and in the overworld, but there are times you will be in the home base, and talking to people.

For the overworld, most fights will be your tanks versus the enemies.  Enemy groups show up on the world map, allowing you time to avoid them, or get in the first attack.  When they pop up, you can press the X Button to target them with your weapons.  You can also check the enemy weaknesses, switch attacker, or which weapon you will shoot them with.  Damage done to them before the fight starts will carry over, as does the ammo consumption.  If you manage to defeat them with this first attack, you also get bonus experience.  I was pleasantly surprised at just how often this happened.  It's a nice way to skip battles, or at least make them shorter, while either giving you full experience, or a nice bonus.  Also, it does not make the game a cake walk to kill most enemies you come across.

If your opening salvo doesn't finish them off, you will start combat.  The player chooses which weapon with each character to attack with, or they can use a variety of skills.  Tanks can equip a variety of cannons, machine guns, and special heavy weapons.  Cannons are fairly strong but have limited ammo, while machine guns are weaker but have unlimited ammunition.  The latter are also really nice for opening shots, as they can finish off a group of enemies.  Special weapons are things like missile launchers, or other specialized armaments.  These tend to be stronger than cannons, but the ammo is even more limited.

Once you have selected your choices, the turn plays out.  The game claims that it is in semi-real time, but it waits while you are selecting your moves.  "Semi-real time" seems to mean that multiple people can shoot each other at the same time.  It's fine, just slightly more confusing when trying to follow who hit who.  Tanks don't have HP, but instead have SP.  When they take damage, SP depletes.  When it runs out...well, the tank is still okay.  Since it represents your shield, you don't immediately die when SP is zero.  Instead, it enemy attacks can damage or destroy parts of your tank.  If a weapon is destroyed, it can't be used until repaired.  If the chassis is destroyed, the pilot gets kicked out and will likely meet a grisly end on the next turn.  It's a nice system, as there are fights I would have lost if just running out of SP knocked the character out of battle.  It's also really easy to fix your tank and restore ammo by warping back to the base from any point on the overworld.  You can then warp back to a nearby warp point and quickly pick up where you left off.

When not driving around, exploding wicked machinery and ants, your characters will run around some dungeons on foot.  The combat is still turned based, and is very similar to the tank combat.  The only difference is you can't get a cheap shot on an enemy to start the fight.  In fact, the dungeon enemies don't appear at all, you just get into random fights with them, like old school RPGs.  Humans also have HP instead of SP, and are knocked out when that HP drops to zero.  Inside a dungeon, you can only warp to the entrance.  Nice if you want to leave.

There is some nice customization with your party and their tanks.  The party is made up of three people, each of whom can equip three weapons.  Each character has a job class, which gives certain skills as it levels up.  The job level is independent of the character's level.  Tanks can equip several different weapons, and you have some say in what is possible.  The chassis can be modified to house more weapons, special weapons, or even scaled back to provide more power to the shield.  You can even edit specific weapon slots if you don't want to change the whole thing.  Special chips can also be equipped to the tank, giving them skills.  These can be simple but powerful, like shooting every cannon or machine gun you have in one turn!  It will burn through ammo, but packs the punch you might need on a boss.

Normal enemies, both in the tank and on foot, aren't that hard.  You can beat them without much difficulty, provided you aren't fighting tank enemies on foot (you aren't Grahf).  However, there also exist wanted and named monsters.  Named are special, stronger enemies that tend to appear in dungeons.  They are just random encounters.  Wanted monsters are basically boss enemies, and defeating them helps pad your bank account nicely.  These fights are much tougher, mostly because they get multiple actions in a turn.  It can require a few tries to iron out a usable strategy.  Since you can save anywhere, I'd recommend it, as these fights can spring up on you and can be difficult.

While it is great that you can save anywhere, that's also tied to one of my gripes with the game.  After saving, it always asks if you want to quit to the title screen, or continue playing.  I don't know why they wanted to copy probably the most annoying thing from Dragon Quest, but they did.  And it's annoying here, too.  Since I save a lot, I would much rather the option to quit to title screen in the menu, and not incessantly asked upon my successful save.

I really liked Metal Max Xeno.  The setting and gameplay aren't anything unique, but they are interesting and fun.  That's very important.  The difficulty goes through a few spikes at times.  However, the amount of party and tank customization, the monsters to fight, dungeons to explore, and items to find make it well worth playing for any RPG fans.


The Good:
Fun battles, interesting premise, and lots of customization for your party.

The Bad:
Uneven difficulty at times, being pestered to continue/quit after every save.

The SaHD:
I don't think it will be hard to convince my wife to cosplay as Maria.  She really likes purple!

(Review code for Metal Max Xeno was provided by the publisher)
Posted by The SAHD Gamer at 10:39:00 PM