Ten years ago, the first Jake Hunter hit the US on the DS.  At that point, I had recently played Phoenix Wright, which started steering me into visual novel territory.  Since I like crime dramas, it seemed like a natural game to play.  I really enjoyed it, but didn't pick up the second release.  Partially because I was indignant that it was just a better version of the one I had already bought, and partially because I had a young child at that time, so I had no money.

Flash forward to 2018, and we are finally seeing another Jake Hunter released.  Ghost of the Dusk collects five different cases, plus an extra.  Each case is a separate story, with only a small handful of characters appearing among them.  Most times you will be playing as the titular character, Jake Hunter, but on a few rare occasions you will take up the mantle of his equally-capable-if-not-moreso assistant Yulia.  They are usually assisted by Jake's cop buddy Scott Kingsley, affectionately called King.

The game is pretty much a visual novel, but without the routes.  There are choices to make, but you can't really make the wrong ones.  This will keep some people from the game, but it shouldn't.  The stories and characters are interesting.  There are many times when you have to move to a different location, talk to various people, and even investigate suspicious scenes.  It works fairly well, but there were a few things that were either strange or rubbed me the wrong way.

First, there are many times when you must talk to people several times in a row.  For some reason, you have to select talk and pick the person again.  I understand doing this when there are multiple people, and Jake switches who he is talking to, but many times it's just the same person.  I guess it's nice if you want to examine something in between lines, but it feels a little strange.  Sometimes instead of speaking to a person, you have to "examine" them to move the story forward.  There are times this makes sense, and times it doesn't.

The examination scenes are the ones that sometimes frustrated me.  You have a small scene, and move the eyeglass around, pressing the button to see what's there.  Some things are obvious, plus the cursor changes to blue, but there were several times when I couldn't proceed.  I was missing the correct pixel to check.  It's not like the game highlights things of interest, so at that point it's just trial and error, clicking around various places on the small screen, hoping it's the slightly different message that allows you to finish and move forward with the story. 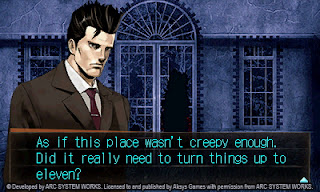 Another problem I had was with the text.  The main case had a rash of typos.  Strangely, they weren't anywhere near as prevalent in the other cases.  What they did all share were boxes of text that would be skipped through.  Sometimes, pressing the button to advance the dialogue would quickly dash through the box that was supposed to come up, and move onto the next.  It was easy enough to scroll back and read it, but that's a bad issue to have in a text-heavy game.  I'm pretty sure it's not my system, either.

While I didn't have a problem with this next point, the game is also localized, instead of just translated.  That means Jake and company talk in detective jargon, and the character names are fairly Westernized.  Personally, I like that, since it helps me keep the characters straight.  It will be a turn off to some people, though.

Ghost of the Dusk is the main case, and as such, lasts the longest.  It took me around 9 hours to go through it.  The four sub-cases were shorter, each lasting around 2 hours.  The final, extra case was much shorter, clocking in at about 30 minutes.  That one has a tiny alternate route, but it's little more than text and a riddle.  Still, the total play time clocks in at under 20 hours.  Since the game is linear, there's not much replay value.  Even if you miss the hidden passwords while going through the cases the first time, you can type them in to gain access.  I like that you aren't forced to replay just for some of the game's extras.

While Jake Hunter Detective Story: Ghost of Dusk is short, the cases and characters are interesting.  The game isn't perfect, and it's not the longest investment of time, but it's well worth playing if you are a fan of visual novels, or detective stories.  Then, hopefully someday we will have the other games/cases translated, too.


The Good:
One main and four sub-cases with interesting stories and characters.

The SaHD:
I know that the art style for each case is a little different, but Yulia's look varies a lot.  I didn't even realize it was her when I started the second case.

(Review code for Jake Hunter: Ghost of the Dusk was provided by the publisher)
Posted by The SAHD Gamer at 8:57:00 PM