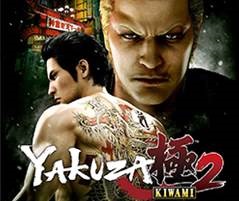 Just as Yakuza Kiwami was a fresh remake of the original, the second Yakuza also gets its due.  Yakuza Kiwami 2 continues Kiryu's tale, and even uses the same engine as Yakuza 6.  It also boasts new mini-games, and some returning or refined ones.

The story continues one year after the previous game, and deals with the fallout of those events.  I like this aspect of the Yakuza story.  It might not always go the places I think it should, but it always moves forward, and lets time pass in a fairly realistic manner.  There are points where it feels like things happen just to make the story longer.  Personally, it can be a bit hard for me to keep a lot of the lore straight.  Having played 5, then Kiwami, then 6, and now Kiwami 2, there are a lot of story developments that I can't always remember the order of.  If I had the time, I'd re-play them in order to better sort out the time line.  This isn't necessarily a problem that others will face, but with the re-releases coming between the ending ones, I'm sure there are others in the same boat.  Thankfully the start of Kiwami 2 does have a memory sequence near the beginning, so you can hit the major points.

If you have played any of the other Yakuza games, the combat will feel familiar, as it is largely unchanged from the core experience.  You attack thugs, build up your heat gauge, which then allows you to unleash really powerful attacks.  It does seem like the developers are continuously refining the combat engine, making minor changes along the way.  This time, it feels like there are far fewer heat moves.  I still get them, but they feel much more situational, and I guess I'm just not in the situation for them.  Extreme Heat returns from chronologically later game Yakuza 6, but you have to buy it after a certain point in the game.  That's a bit of a pain, but I still like and use the mode.  I just wish buying a longer heat bar didn't make it harder to activate Extreme Heat.  Weapons are still very useful, but you have to store them after picking them up in order to actually keep them after a fight.  It's a bit cumbersome.  For better or worse, they give you tons of them in the enemy hideouts, so use them and throw the empty ones away.

While I will miss the plethora of heat moves, my biggest problem in combat is the dodge.  Blocking still only works from the front, ensuring I can't and won't use it.  So, I have to rely on dodging.  Trouble is, by default, it is terrible.  It's more of a timing thing, since Kiryu barely moves anywhere when dodging, which seems to go against the concept.  Trying to dodge for me usually did nothing.  In the skill menu, there is a way to increase the dodge distance.  Buying one level had such a minor effect, I checked to make sure I actually bought it.  That doesn't make me want to invest more points into it.  However, there is also a skill that gives you the ability to string multiple dodges together.  This was a much more effective way to dodge, and I could actually use it.  Too bad I had to go through half the game before finding and being able to buy it.

Kiwami 2 has a few more chapters than other Yakuza games I've played, but the chapters themselves feel shorter.  The only have a few story and battles scenes.  I think you are supposed to use the time between to wander around and do the side stories, which is pretty much what I did.  Of course there are many side stories, quests, and mini-games to fill your time.  Like the other games in the series, expect many hours of beating punks, finding locker keys, and helping out random strangers.

One cool and fun addition is the Majima story line.  No longer content to stay in the background (or attack you at random times), the cyclops now has his own mini-story and game mode.  It's really fun to use him, as he has a knife and lacks Kiryu's aversion to killing people while totally killing them.  Goro Majima just straight up stabs fools, and loves every second of it.  He doesn't gain experience sadly, but you can use items to heal.  He even has his own heat moves.  I like this mode, but unfortunately you are limited in how far you can progress in it until you complete more of Kiryu's story.  Since it takes place between Kiwami and Kiwami 2, this doesn't make sense to me.  Just let me run wild as the Mad Dog of Shimano when I want to!

Yakuza knows you like your mini-games, and Kiwami 2 brings them to you.  The Sega arcade not only packs in Virtua Fighter 2 again, but also adds Virutal On!  You can also help run a club, which is a lot more hectic than I would have thought, or play a crane game.  Yes, the virtual one is rigged too, but I've won it a few times.  The crowing achievement in mini-games has to be Toylets.  It's a mini-game that you play while Kiryu is taking a piss.

No, you didn't misread that, and yes, it's true.  There are two Toylet games, and they seem kind of simple.  Admittedly, I lost the first one I tried, but was unable to try again until I ate and drank to fill my bladder.  It's really weird to think about, weird to write about, and weird to play.  However, it does feel appropriate to the Yakuza universe.  Don't forget that probably every iteration has a sub-story to help some guy in a bathroom stall.

Like me, if you enjoyed the Clan Creator in Yakuza 6, you will be glad to know that it has...sort of returned.  Instead of Kiryu's clan, it is the clan for Majima Construction.  He truly is everywhere.  After the destruction and desertion of Purgatory, Majima moved in and is building his own paradise.  Unfortunately, some real estate big wigs know how "money" it will be, and are moving in to steal the plans.  Instead of being on the offense, you are defending your equipment from the endless thugs these construction moguls throw at you.  No longer will you buy generic units, but instead direct a small group of individuals where to go to either save your equipment, or prevent the enemies from reaching them.  So far it's pretty fun, but I do prefer the original.  Just as before, the enemies are Japanese professional wrestlers.  This time it's some legends instead of the newer guys.  It's still an awesome idea to include that kind of thing, and I'm curious who they will get next time.

Yakuza Kiwami 2 is an easy recommendation if you are following the Yakuza tale.  It looks great and plays pretty well.  Combat is again similar to all the others, but slightly tweaked to ensure it is not the exact same.  One day they will get it perfect.  Like all the others, there is a focus on the story, but includes a lot of side stuff to distract you.


The Good:
More of Kiryu being a badass, lots of things to do and punks to beat up.

The Bad:
Story drags on at times, combat is again tweaked from previous releases.

The SaHD:
My favorite part in any side story is when some dumb punk talks down to Kiryu.  You just smile as he runs his mouth, because you know you are about to whoop his ass.

(Review code for Yakuza Kiwami 2 was provided by the publisher)
Posted by The SAHD Gamer at 8:21:00 PM