I'm always game to try a new shmup.  Some are good, some are bad, but it's a genre I enjoy.  When Shikhondo was announced, I made sure to ask for a review code.  I figured it would play really well on the Switch, and happily received that version.

Once on the main game menu, you do have a few options.  There is arcade mode, hardcore, novice, and boss rush.  Arcade mode is pretty much the normal game.  As with a lot of the other modes, you can choose one of four difficulty levels.  Boss rush is pretty self-explanatory, as you just fight all of the bosses.  Novice is supposedly easier, but didn't feel that different from the easy setting of the arcade mode.  Hardcore boasts 1 life, no continues, but double the speed of soul charging.  When I tried it, it let me continue.  Once I did, I had the normal amount of lives until the end of the stage.  Starting the next one seemed to put me back to hardcore, as I only had the one life.  I'm not sure if this is intentional, but it did feel weird.  To round it out, there's a customize mode that lets you change a few options, and local co-op.  Sadly, I couldn't find anyone in my house brave enough to try that out with me.

The controls and ideas behind the game are pretty simple.  There is a shot button for your normal attack.  There is an alt-fire button, that you hold with the shot button to do a slightly different attack.  This will also make you move a lot slower, so it's easier to weave between bullets.  When you pass close by an enemy bullet, it will fill a bit of your soul gauge.  When it is full, pressing the soul button will have you enter a powered up state for a few seconds.  Pressing the button again will consume a soul stock, but power you up a second level.  If you press the soul button when you don't have a full soul meter, it acts like a bomb attack, damaging on-screen enemies, and taking away some of the bullets.  The soul system is pretty nice once you get the hang of it, just make sure to look at the meter (or listen for the sound) before you hit the button, so you get the power-up instead of the bomb.  Both are useful, but the power-up is better.  Well, for the most part.

There are two characters to choose from, the Grim Reaper and The Girl.  Really descriptive, I know.  Of course I tried the reaper first, as I figured she was like Botan (assuming anyone else remembers Yu Yu Hakusho).  Both have different shot patterns, so the choice isn't superficial.  The reaper has a normal spread, while holding the alt and shot buttons concentrates her fire.  The girl has two orbs with her.  Her normal shot is fairly concentrated, but the small shots from the orbs will automatically aim toward enemies.  The alt-fire send the orbs next to an enemy, and blasts them at short range.  At first I liked the reaper's shot pattern, but eventually found the girl to be better for me. 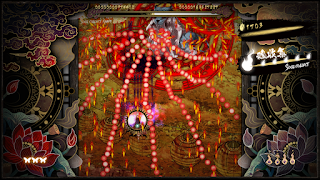 I did have some problems using the joy-con's analog stick.  There were times where it wouldn't respond, especially if I was moving it back and forth rapidly (like when dodging bullets).  The d-pad buttons worked fine.  I switched to the pro controller, and the stick worked fine.  It may only be a problem with my joy-con, but it's not something I have encountered in any game I've played with them before.

Just like most shmups, you die in 1 hit.  You will start right where you left off, but will be out any soul charge you had.  Of course, these rules can be changed in the "customize" game type.  Thankfully, the characters have really tight hit boxes.  Coupled with the slower movement during alt-fire, it feels good to dodge the bullet hell.  Even if you do run out of lives, you can continue, and it still places you right where you were.  It's very possible to brute force your way through the game, which is nice at least for completing it, and practicing later stages, since there is no feature to select them.

I will say the game can be hard, but it's mostly because the enemy bullets are sometimes hard to see through your shots.  This problem is magnified when using the soul power-up.  I'd also heartily recommend playing in TV mode, as the small screen of handheld mode plus lots of small bullets is a recipe for disaster.  At least some bullet types disappear when the enemy dies, which saved me more times than I can count.

There are 5 stages, each ending with a giant boss battle.  After the fifth one, the game goes on for a few seconds, leading me to believe there is some kind of hidden final boss.  I don't know if there is, and I don't know what the qualifications are.  I would imagine having to do it on 1CC or something like that, but I don't know for sure.  In another unique feature, after completing a stage, you can choose to get an extra life, or another soul.  It isn't much, but I like it.  Obviously, they don't offer it in hardcore mode.

Shikhondo: Soul Eater may not offer many modes or characters, but it's a very solid and fun shmup.  The soul charge and power-up is a nice and unique gameplay mechanic that I enjoyed.  I'd easily recommend it to fans of the genre.  Just be sure to play in TV mode.

The Bad:
Very much a "no frills" experience.

The SaHD:
I really should have invested in the shmup Switch grip Kickstarter thing.

(Review code for Shikhondo was provided by the publisher)
Posted by The SAHD Gamer at 8:52:00 PM