Fox n Forests is a retro inspired platformer.  It has nice sprite artwork and a very old school game map.  Your goal is to guide Rick the fox through the seasons and find each piece of magic bark.  To do so, Rick will bring along his trusty sword and crossbow, while also gaining magic that allows him to change the season in each stage.

Platforming is decent overall.  Rick starts with a double jump, which is very useful.  There are some jumps that feels just out of reach of the double jump, which is disappointing.  It is unfortunately harder to jump over enemies and hazards than I want, because Rick's hitbox feels too big.  He will frequently hit his head on things above him, which kills your jump momentum.  There are, of course, bottomless pits, too.  Running out of health or falling to your doom will quickly send you back to the last checkpoint.  The saving grace is that respawning is so fast.  The bad side is you have to pay to use checkpoints, and the cost increases as the level goes on.  You can skip them if you want to save your money.  I don't really like that idea, since I need most of the checkpoints.  I also feel it's a way to keep your total money down, meaning you will need to replay stages more times to buy the upgrades.

Combat somehow feels worse than the platforming.  Rick has two basic attacks: one with a sword, and one with a crossbow.  It's a great idea, but suffers from both being attached to the same button.  If you are standing still, Rick will use his crossbow.  If you are moving or jumping, he will use his sword.  I'd really like to be able to use the crossbow more than you can.  Ranged attacks help a lot, given Rick's large hitbox and how cheesy the enemies can be.  I'd also love to be able to jump and shoot.  It's not like that would break the game, just make it more fair, so having them as separate buttons would be great.

The crossbow is weak, and has a cooldown between volleys, so you still need to use the sword.  Even so, the sword had its own problems.  The range isn't that good, and I frequently got hit while trying to attack enemies.  The purchasable double jump attack hits a nice circle around Rick, but the single jump attack is much more confined.  If it was more of an arc, it would be better, and it wouldn't be so easy to get hit while trying to use such a precise attack. 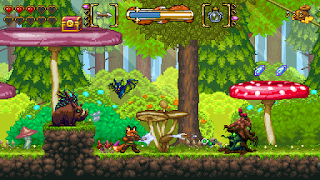 The unique mechanic if the game is the ability to change the season.  Each level has two versions, and using your magic effectively swaps between them.  Water will freeze so it can be walked on, plants grow or retract, and fog can disappear.  It's a really cool idea that is used pretty well.  My only gripes with it are that you cannot activate it in the air (but can turn it off while jumping), and the activation time.  When you change the season, Rick has to stop and hold up his sword.  This would be fine if the rest of the game paused with him, but it doesn't.  So, if you aren't careful, or constantly unlucky, you can get hit when you activate the season change.  As if the game needed to get in more cheap hits.  It might be less frustrating on a TV instead of handheld mode.

The money you gather not only pays for checkpoints, but can be used to get potions and upgrades for Rick.  Health and special move upgrades just require money, while mana and melee attack upgrades also require some collectibles.  Unfortunately, you have to alternate buying special move and melee strength increases, so you will have to find some of the whetstones to get all the moves.  The potions you can buy are cheap, but you need to find the bottles first.  Easier said than done.

There are not many levels in the game, as each section has two, a boss fight, and a bonus stage.  To make up for this, the levels themselves are long.  Too long for my tastes.  I'm a fan of more, but shorter, levels (see Disney Infinity versus Skylanders).  Especially when you can easily jump back to completed stages for missed collectibles with new abilities.  Well, I say “can”, but the game means “will.”  After beating a boss, you need a certain number of the seed collectibles to progress.  While I usually like going back to grab missed stuff, it feels arbitrary when I'm forced to.  Plus, when I’m happy just getting through a stage, given how frustrating things can get, I don’t really want to go back.  However, since the levels are big with some alternate paths, you may be completing each level several times to find everything.  Or without finding everything, like me.  You also need every seed in a set of levels to do the bonus stage.  The first bonus stage gives a little extra money, but you only get one chance to do it.  Considering the work I had to put in to get it, the reward was not worth it.

Parts of Fox n Forests are fun, but it feels like a missed opportunity.   There are good elements, such as the different attacks and the season changing mechanic.  Too bad most other game mechanics are working against you.  In reality, the game is short, and has to resort to artificially drawing it out.  Because of this, it feels strange to complain about each level being way too long, even though I will still do just that.  Ultimately, die hard platform players looking for a challenge or something unique should check it out, but for others it's a pass.


The Good:
Season changing leads to some nice level designs and opportunities.

The Bad:
Controls aren't always responsive, character's hitbox is too big, not many levels.

The SaHD:
I really appreciate the Gorgeous Gorge name.

(Review code for Fox n Forests was received from the publisher)
Posted by The SAHD Gamer at 9:19:00 PM