The Vita version of Tokyo Xanadu was a pleasant surprise earlier this year, and I was looking forward to trying out Tokyo Xanadu EX+ on the PS4.  Newly added content should be the icing on the top of this cake.

The core of the game is largely the same.  Kou and his friends get caught up in the mysterious world of Eclipses, doorways to another realm, and Greeds, the monsters that live in the Eclipse and feed off people's negative emotions.  There will be story scenes as Kou goes through school, which leads to finding a new Eclipse, where you enter to save someone, and fight a boss.  The story is pretty good and the characters are enjoyable.  Each chapter has "free time", where you can hang out with various characters to deepen your relationship with them.  This costs a finite resource (now correctly known only as affinity shards), so you can't be really good friends with everyone in one playthrough.

When in an Eclipse dungeon, you will run around, fight monsters, dodge their attacks, and hit switches.  The controls are pretty responsive, but a bit unusual for me.  Attack is the X Button, Jump is Circle, and ranged attack is set to Square.  I would usually prefer them shifted one button clockwise, and set them that way in the options.  I still would mess them up, so I just set them back.  Maybe it was because I played the Vita one a lot?  New to this version are the EX moves that each character gets.  You build up the meter for them, same as the other special attacks, and unleash them with the R2 button.  These are cool and really powerful, plus you are invincible during them.  I don't know if they were needed, but I do like them.

While the difficulty of the original release felt just right, it now seems higher and also less consistent in EX+.  In the first dungeon, enemies and the boss both did a lot of damage.  It seems like that should be the most balanced portion of the game, since you know the player's level and equipment at that point.  The dungeon in the first bonus chapter was also more difficult than I think it should have been.  It was a little better in the second dungeon, but the difficulty changes were still noticeable.  The bosses seem to have more HP, which makes fighting them more of a slog than it was, and many enemies are just stronger.  I decided to bump it down from the "normal" setting to "easy", which made a difference.  However, there were still portions where enemies did too much damage with their attacks, and sections where I could just blow through them.  I suppose I have to grind now, even though it was very well balanced in the initial release.  It's not enough to make me dislike the game, but it is a disappointing change. 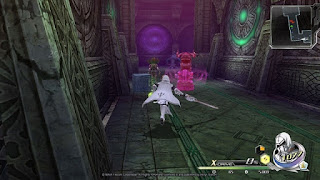 So what else have they added to make people double dip (assuming they are one of the small handful of people who own a Vita)?  Well, for starters the localization seems to be much better, as I haven't noticed the issues I had with the Vita release.  You can also travel to Kou's room, and put up decorations.  Certain decorations will have a cut scene with another character that raises your max HP.  While I would not be sold on just being able to decorate a room as a great new feature to highlight, the stat boost is always welcome.

The biggest and best new additions are the side stories available at the end of each chapter.  These focus on other characters in the story and helps flesh them out as characters.  The first one is especially good, since it gives you a preview for later in the game.  You play as new playable character White Shroud, and the new element: Light.  Light is strong against all the non-shadow elements, while shadow is strong against light and...the other elements.  Hmmm, that doesn't seem thought out, does it?  Anyway, White Shroud is fun to play as, and I really enjoyed the side story additions.

Despite the difficulty issues, I enjoyed playing Tokyo Xanadu EX+.  If you played the original, there is enough new content that I'd recommend playing it again (too bad the save file doesn't transfer).  If you didn't play the original, but like good action RPGs, then I'd also recommend the game.


The Good:
Added content make this good game worth revisiting.

The Bad:
Higher and inconsistent difficulty.

The SaHD:
Now that the original version has been out for a bit, I found a guide that specifies the hidden quests.

(Review code for Tokyo Xanadu EX+ was provided by the publisher)
Posted by The SAHD Gamer at 4:49:00 PM