Trapped in a school, surrounded by zombies, and no way to escape...what's a girl to do?  Bust out some guns and start blasting!  That's the basic premise of School Girl / Zombie Hunter, a game set in the Onechanbara universe with the title that explains it all.

The game features a single player campaign as well as multi-player missions.  The story is divided into 5 chapters, each then broken up further into 5 to 7 missions.  Side missions are unlocked after completing each chapter.  Missions have story scenes before and after them, which usually take longer than the missions themselves.  I would like a way to advance the spoken dialogue without skipping the scene entirely.  Character selection on most missions is fixed, but some allow you to choose.  Plus, when you complete a mission, you can replay it with any of the girls.  This is useful for getting collectibles (because of course there are collectibles), and grinding.

Each girl starts with a proficient weapon type, but you are free to equip them with up to five different weapons from any type.  I like to keep at least their default one, as most are pretty useful, but I also give each an assault rifle, as it seems the most useful and well-rounded, and a sniper rifle.  The rocket launcher sadly didn't seem as useful as I wanted, and not just because the explosion can easily damage you and your allies.  Since weapons don't really differentiate the girls, they each have a unique skill.  Some are more useful than others, notably Akiha's item-less resurrection, and Mayaya marking the location of items and collectibles.

Besides the different types of weapons, each weapons has many variants.  There are varied stats like attack power and reload speed to consider when equipping your characters.  Plus there are additional bonuses, like blast that knocks enemies down, and dismember, which can cripple the zombies.  You will also unlock outfits and shoes for the girls to wear.  These don't affect your stats, so choose whichever you want.  Lastly, you can change the girls' underwear.  It tracks the time worn for each girl, which at a certain point actually is used for something.  It's weird to be sure, but it is Onechanbara after all.


The default controls are okay, but not really a configuration I would use for a third-person shooter.  The jump I could deal with on the triggers, but having the zoom/look down sights button as a face button is just too weird to me.  Thankfully the controls can be changed, so I set them more like a traditional shooter.  This ended up working really well for me, although the aiming sensitivity and myself were always at odds. 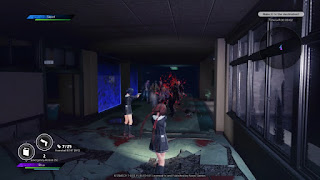 Even on the normal setting, the game's difficulty seems inconsistent.  Some missions are really easy, and some can get quite hard.  It's mostly because of the different enemy types.  The normal, slow zombies pose little threat.  There are some special ones that glow green or orange, which explode in a poison or concussive blast respectively.  These are only a problem if they die near you, or your melee attack doesn't knock them away.  Still, not too bad.

Then there are the glowing red ones.  These will run at you as fast as they can.  As you might have guessed, they are really annoying.  Partially because they only respond to being shot when they die, partly because it can be hard to shoot them, and mostly because the game isn't designed to deal with them.  They are too aggressive, and you can't do much about it.  There is a dodge roll, which takes stamina, and can't be chained too closely together.  Plus, if you do it too early, they just run up to where you rolled to, and hit you there.  Your melee attack may work, but you can't interrupt your reload with it.  I could deal with one or two of these enemies, but they tend to come in groups.  If one hits you, the rest usually will too, which just adds damage you can't mitigate at that point.  Enemies can spawn pretty much anywhere, including right next to you or behind you, and the red ones can spawn while running at you, leaving you no time to react.  Honestly, I wouldn't have a problem if they weren't so constant and numerous on many missions.

The best way to deal with the difficulty is to grind for experience.  The only real way to get experience is by killing enemies, as the end reward is directly tied to the number of kills you get.  So, missions that don't require you to kill enemies, or only have bosses, won't help you much.  Difficulty also doesn't give any kind of bonus, so you are best off grinding a timed survival mission on the easiest setting, since you will kill more enemies that way.  Overall, this system makes gaining levels inconsistent, furthering the need to grind.

While the game boasts multiplayer missions, they are noticeably more difficult than the story ones.  You can have up to five people play them, and it seems to be geared for that, no matter how many join.  I tried a few times to play missions, but was only able to get into a mission twice.  The first time, the other person and I barely won (probably because he was a much higher level), while I wasn't as successful the next time.  At first, I thought the online might be good for grinding, but it's way too difficult to be useful for much of anything.  If you are lucky enough to have a full group, it might be okay, but good luck finding one.

School Girl / Zombie Hunter is a pretty average game.  It has a few neat aspects, like the character skills and the weapon variants, but doesn't do many unique things.  The difficulty is wildly inconsistent most of the time, and the loading screens could use...anything to make them not just black screens for several seconds at a time.


The Good:
A good amount of missions to undertake, good variety of weapon abilities.

The Bad:
The red, rushing enemies are annoying, and the difficulty feels all over the place.

The SaHD:
Wait, why do the girls from this school normally carry pistols?!  And how does the jamming not affect the radio?  And since it doesn't, how come they still can't leave?

(Review code for School Girl / Zombie Hunter was provided by the publisher)
Posted by The SAHD Gamer at 5:38:00 PM