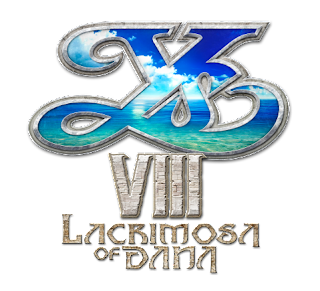 While not a game series I talk about often, I do have a fondness for Ys III.  I played it way back on the SNES, when my friend bought the game.  I think I eventually traded him for it, but regardless, I remember it being hard but fun, and having cool artwork in the instruction booklet.  I haven't really played many other of the series, except some of Ys I and II on the DS...and Ark of Nepishtim.  Strangely, I don't recall much of either title.  Still, Ys VIII sounded interesting enough to give a try, and I'm very glad I did.

I'll say that the first impression of the game wasn't great.  It's a PS4 title, but the graphics don't seem to support that.  Especially the water.  This could easily be because it's also a Vita title, so I'll look past that.  Also, a game should not solely be judged on its looks, but they will and should play some part in the overall impression.

Ys VIII is an action rpg where you battle creatures and find other castaways on the deserted isle of Seiren.  Fights are in real time, and you will need to be quick on your toes to avoid getting hit.  Dodging at the right time will slow down time for everyone but you, allowing you some free hits.  Hit detection felt a bit off most times, with attacks hitting me before it looked like they should.  Still, there were plenty of times I pulled off the dodge.  The game is sometimes generous with it to, and enemies won't aim-bot you with their attacks.  There are times when they blatantly do so, especially the bosses.

The controls just felt a little off.  Attacking is done with the X Button, and jumping with the Circle Button.  I would have preferred them each moved one button counter-clockwise.  You can actually re-map most of the controls.  I thought this would help, but I think I used the default just enough to make switching not feel right either.  I ended up switching back, and just tried to get better.  I still made mistakes occasionally.  Maybe my brain is what's just a little off. 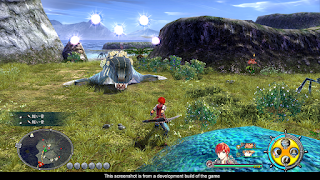 As you explore the areas, you also find materials and treasure chests.  Materials as used to trade for or make items, including weapon upgrades and armor to wear.  Sometimes you find a blockade that can be moved when you find enough people, which I thought was a pretty neat way to limit areas of the game.  Adol and friends also find adventure equipment as you wander around, which will help you reach even more areas.  I will say several of these were not stereotypical to me, like boots that let you walk on top of mud instead of sinking.  They are all useful in several places, so thankfully you can eventually equip more than one.  Even so, you might have to swap more than you'd like.

Besides the main quest, there are side quests, invasion battles, and suppression battles.  The side quests have time limits, but based on plot progression, not real time.  Still, it's best to do what you can as soon as possible.  Suppression battles are like small scale horde mode fights.  There are several waves of enemies, and you must defeat them before they can destroy the town gates.  While kind of fun, these fights are mostly optional.  Invasion battles are you going into an area to destroy monster nests.  You have to light torches and keep them lit to weaken the nests while you hit them.  They make sense in the context of the game, but still feel largely superfluous.

Ys VIII has its fair share of difficulty.  It starts off fairly easy, but steadily ramps up throughout the game.  There are a few annoying battles, usually involving a boss or the ancient species before you get special weapons for them.  Being an action RPG game, its content leans more toward the RPG side, offering many hours of playtime with lots of story and side quests to keep you occupied.  I'd say it's easily 35-40 hours for your first run through the game.

I wasn't sure I would like Ys VIII: Lacrimosa of DANA when I asked to review it, but I'm happy that I did.  It's a very fun action RPG with fun exploration aspects.  It offers a good amount of content, too.  I'd recommend it to action and action RPG fans.  You'll find a lot of things to enjoy!


The Good:
Several characters to use, a big island to explore, many fights to be had, and lots to do.

The Bad:
Boss fights can be tiring, early fights against the ancient species are annoying.

The SaHD:
I really could have done without the murderer subplot.

(Review code for Ys VIII: Lacrimosa of DANA was provided by the publisher)
Posted by The SAHD Gamer at 10:06:00 AM