Dungeon RPGs.  While not initially a fan, I think I've reviewed enough that I'm starting to like them more and more.  Or maybe Mary Skelter is just good enough to make me like them.  I'm a sucker for folklore and mythology, so I really like that the playable characters are people like Cinderella and Red Riding Hood.  Plus, you can give them gifts and up their affection!

If you have played a dungeon RPG before, then the dungeon maps will be immediately familiar.  You move around a grid, opening doors and fighting enemies, some of whom appear on the map.  Thankfully there aren't many gimmick tiles, just some easily identifiable damage, pitfall, and the like.  One new thing is the chain lines, where you need to balance to move across them.  They aren't bad, but do feel unnecessary.  Each blood maiden also comes with a map ability, most of which let you move past obstacles or unlock new dungeon areas.  As cool as these are, I think Alice's is my favorite.  She creates a rabbit hole that allows you to save or escape the dungeon.  Very useful!

Since the giant tower you are in is a living creature, it has needs.  Doing specific things will fill one of three meters, hunger, libido and sleep (hey, that sounds familiar!).  Filling one brings up a roulette wheel that offers multiple bonuses.  Some are way more useful than others.  This is the only way to unlock the hidden areas in most dungeon floors.  If you hit the "Growth Area" tile, then it uncovers a new area with tougher enemies.  I really liked to explore, so I had to go there, too.  I don't like that it's behind a roulette wheel, even if you can save scum it.

What about the battles?  They are turn based, but action order is determined by character agility and if you used a skill.  It's actually a lot like Moero Chronicle.  The girls can attack, use a skill, guard, or try to escape.  They can also lick the blood off of another girl for a minor heal.  I promise this makes sense for the game.  Anyway, Jack can use items, or guard one of the girls.  Oh, he can also use his gun to shoot blood on them.  Why would you do this? 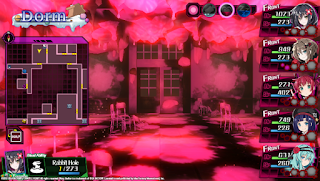 You see, the blood maidens can get powered up when covered in the blood of enemies, called Massacre Mode.  Sometimes they enter Blood Skelter mode instead, where they are even stronger, but completely berserk.  As the story explains, there is no recovering from this...except Jack's blood.  So, he has to shoot the girls with it so they can enter the powered up state, but remain in control of themselves.  Balancing this with building up blood (if he loses too much he's likely to be stunned) gives some battles added tension.  I really liked the main character getting a more active role in battle than just an item mule.

Battles are okay, but what about the bosses?  Here's where my biggest gripe with the game is.  Sometimes they wander around the dungeon floors.  When you are close enough, they will try and chase you down while you try to escape.  Trouble is, they don't follow the normal rules, and will keep moving even if you aren't!  Also, you can't see the minimap when this happens, which is just bad.  If I put the game on easy, the map is supposed to stay up, so maybe I should do that.  If you run into the Nightmare and damage it enough, you can attempt to run away again.  If you get far enough away, it will end that mode and return the game to normal.

If that was the extent of a Nightmare's annoyance, I could probably deal with it.  The actual fights with them are much harder.  Normal battles aren't that hard, but the boss battles give the game a lot of difficulty.  They have a ton of HP, and hit like a truck.  As the fight goes on, there are times they attack twice.  One boss in particular, the boss of the Temple stage, came within a hair's breath of making me quit playing the game entirely.  You have to set off traps and fight it up several floors of a tower.  I was missing doors on two of the floors that let you fight it.  For some reason, fighting it on floors 2 and 3 wasn't enough, but fighting it on floors 1 and 2 was.  I don't know why, but such a simple and easy to miss thing (there's no minimap, since it's like the Nightmare encounters) was the cause of a massive amount of frustration.

In your base, you can use blood crystals dropped by enemies to upgrade your equipment.  It's worth doing, since you aren't sure when you will get stronger stuff.  Sadly, the base store doesn't sell equipment (but you can sell to her), so you are limited by RNG with what you get.  Sometimes enemies drop stuff, and some chests have equipment.  Your best bet is to save up lots of money and buy stuff from the dungeon shops.  They are random, so again, RNG is your limiter.  It's not the best system, as I'd prefer some reliability in getting better equipment. 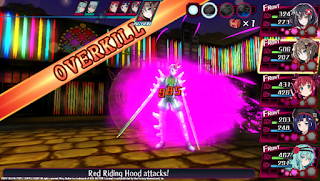 Your characters can learn the active skills from any of their unlocked job classes, which is nice.  Passives are locked to the job however.  Unfortunately, you have to have 'permission' to switch jobs, which you get every 10 levels.  I wouldn't mind this, but you still need a permission to switch to unlocked jobs.  The only exception is the character's default class.  Because of this, I didn't experiment with the jobs as much as I would have liked.  I usually would unlock one for the skill(s) I wanted, then move back into whatever class I liked for them.

You can also level down a character.  There are set levels you will lose, and it costs blood crystals for some reason.  However, you will get bonus stats and CP to buy skills.  It also effectively is a re-spec, since it refunds your CP too.  I tried it once, and the results were far from stellar.  I don't know how many extra CP I got, but I ended up with 1 extra point per stat when I got back to my original level.  Maybe doing more levels gets a bigger bonus, or doing it multiple times, but it doesn't seem useful until maybe very late in the game.

Since the game has some things in common with Moero Chronicle, you might be wondering if any of the more...questionable systems are in Mary Skelter.  Well...kind of.  To cleanse the blood corruption from the maidens, you have to rub it off of them.  The first time you do this to a girl, you are rubbing the screen over a picture of them.  They won't be completely naked, but close.  After this, you can skip that part if you want.  It's also completely optional, as it only give you a boost to max HP or SP.  I'd use it more if I could pick which of those two it would give, but it seems set based off the character.

I would recommend dungeon RPG fans pick up and play Mary Skelter.  It's a fun game with some nagging issues.  I really got into the game more than I thought I would.  I just kept playing!


The Good:
A dungeon RPG without most of the pitfalls of the genre.  Cool story premise and character designs.

The Bad:
Boss fights and Nightmare attacks are not fun.

(Review code for Mary Skelter was provided by the publisher)
Posted by The SAHD Gamer at 2:34:00 PM