In a world where monster girls are going crazy and attacking their formerly allied humans, someone must find the cause and put a stop to it.  Io, forced by the local mayor, is that someone.  He quickly recruits his childhood friend and monster girl Lilia, then sets out to find the cause.

Previously released in Japan on the Vita as Moe Chronicle, Moero Chronicle is now available on Steam.  It's a first person dungeon RPG, but with a unique twist.  When it comes time to save the monster girls, you have to...well, poke, pinch, and rub them.  If you have played Monster Monpiece, it's basically the same mechanic as it is there.

Dungeons are set on a grid, and you can move forward, backward, or turn to the sides with the d-pad.  While using an Xbox 360 controller, movement was locked to the d-pad.  This was unfortunate, since as much as I like most aspects of that controller, the d-pad is easily the worst part.  The d-pad being bad isn't the game's fault, I would have just liked to be able to set movement to the stick instead.  The stick is used for...some kind of menu shortcuts that I didn't use.  I could change the button setting in the options, but not the setting for the sticks. 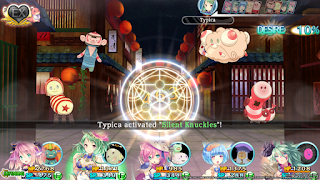 Battles are turn based, but use the agility stat to determine order.  However, it isn't broken into traditional turns.  Instead, faster characters just act more often than slow ones.  The monster girls in your party can attack, use a skill, defend, or calm Io down.  Attacks don't cost anything, but tend to be weaker than skills.  Skills use MP, so they should be used sparingly.  Besides the monster girls and enemies, Io can do some actions as well.  He can "store" his desire, and later "release" it to power up one of the monster girls.  This...sounds more questionable than it is.  Normal battles might not see this used to much, but it helps during boss battles.  Sometimes it will fail, and Io gets too excited.  When this happens, he can't do anything for a few turns.  If the girls use their "calm" command, this time is shortened.  Io is also the one that can command the team to flee, or use an item on them.  I like that you don't have to spend an attacking turn to use an item, even if you can only use one.

Now we can go back to the rubbing mechanic, Bumping Scratch.  To recruit a monster girl, you must first damage their clothing.  After that, it's just like Monster Monpiece.  you have a time limit, and where the girl is...affected...by your actions changes.  If you don't fill the meter in the time limit, the monster girl will run off.  She will return in a little bit, so you aren't out of a party member because of a small mistake.  Using the mouse for this is fine, but what about the controller?  Well, it's functional, but feels slow and sometimes unresponsive, particularly the rubbing action.  I really didn't like using the mouse for battle, so I stuck with the controller.  I didn't lose many of the Bumping Scratch games, so it didn't really hamper me playing the game.

Each monster girls can also change their stats and skills by equipping different...uh...battle panties.  They are similar to class changes, as changing the skills they use can change their function in battle.  First you have to find the different pairs of panties, then give it to them.  You can only change at the inn in town, and you will have to fight many battles to learn all the associated skills.  It's a useful system, but I do have one gripe.  The girls' costumes change when they wear different panties, but it's really just putting them in different underwear.  I would have liked to see actual different costumes, or even recolors of the default ones as well. 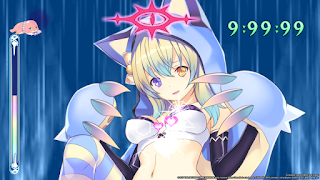 Length and difficulty of Moero Chronicle is fairly standard for the genre.  There are only a few dungeons, but it will take you hours of walking and fighting to get through each one.  Some bosses and enemies are very strong, so you will spend time grinding.  You'll also probably grind for money, job panty skills, and pet monsters.  There is some post-story stuff once you have beaten the game.  You can also set the game on easy if you want a slightly easier time.  I would have liked a lot more save points in dungeons, or even nice shortcuts through floors.  It won't bother some people, but I'm a save-a-holic.

Moero Chronicle ran flawlessly on both my i7 desktop and my i5 laptop.  Loading times were very short.  I did prefer to use the controller for dungeons and battles, and it worked well enough for Bumping Scratch.  Still, I would be better off getting a different controller than the one I had.  The game was pretty fun, although the content will be a barrier to some people.  Still, a very competent dungeon RPG with a good amount of content.  If you are in the mood for a dungeon crawler and don't mind some lewd-ish content, then Moero Chronicle is worth trying out!


The Good:
A very unique and competent dungeon RPG with plenty of party members.

The Bad:
Just like the majority of games in the genre, expect to grind and repeat areas.

The SaHD:
Definitely not one I played near my kids.  However, my wife doesn't care, since she played the Vita version.

(Review code for Moero Chronicle was provided by the publisher)
Posted by The SAHD Gamer at 2:05:00 PM