After the previous emperor passed away, his daughter, Cecille, hesitantly takes the throne.  With it, she acquires the mystical Grimoire, a talking book that gives her the ability to summon souls as soldiers.  Upon learning of this, Laendur, one of her generals, decides that he cannot let such callous disregard for life go, and seeks to usurp her.  Both sides of this tale make up Fallen Legion.  On the PS4, the game is given the subtitle Sins of an Empire, and follows Cecille.  To see Laendur's perspective, you will have to play Flames of Rebellion on the PS Vita.

Despite the different characters and side of the story, the other basic parts remain the same for both versions.  As you make your way through the game, various points on the map open up, which usually offer a battle, but sometimes just some more story.  Combat levels are a series of fights sometimes broken up by a timed choice.  These choices will thankfully restore your health, and also provide buffs, debuffs, and sometimes relics to use in that stage.  The choices also effect some event scenes, alternate battle locations, and can even evolve your exemplars.

While this is a unique idea, it does have some flaws.  First, they are timed.  Not a huge deal, but since it affects your exemplars, spells, and areas, it would be nice to actually have more than 10 seconds to think about it.  Second, it seems like you should either choose responses based off the buff it gives, or what you personally would choose.  There are factions associated with each choice, I think, but there are more than three factions.  Can you imagine the mess if your Dungeons and Dragons choices moved you toward one of the nine alignments, but you only had three random choices?  Many of these involve characters that you never see, or even know anything about, so how can we keep them straight?  Third, you don't always know what effects there will be from your choice.  While I guess this is realistic, it's not the best decision.  I suppose it gives the game replay value, but I'd like to know what choices are moving me toward things I'd actually like.


Now for the battles.  They start off promising enough.  Each of the characters you control in battle correspond to a face button.  Your main character (Cecille or Laendur) uses spells, which require their mana be filled by landing attacks.  The others use AP to attack.  AP fills as you are not attacking or defending, and up to three can be stored.  There are also link attacks if you can get the timing down (it's trickier than you think).  Pressing the L/L1 Button will have your units guard.  If you do it right before the enemy hits you, you get a perfect block.

Sounds, fine, right?  Well, the perfect block in Fallen Legion doesn't quite behave like similar functions in other games, which is a shame.  There's a slight delay when blocking/unblocking, which means it's not always possible to perfect block every attack.  If enemies attack too closely together, you are left defenseless if you perfect block the first hit.  I'm not a fan of punishing the player for being good.  Some enemies attack immediately as they move, making perfect blocking their attacks ridiculously hard.  Blocking is also done by the whole party, so you can't just have an armored exemplar in front block everything while the back attacks.  Enemies attack at strange intervals, sometimes leaving you no time to actually counter-attack.  I personally feel like the perfect block should at least stagger the attacker, but preferably stop any concurrent attackers, so you have a window of opportunity to hit them.  As it stands, you don't get that, nor usually enough time to actually do a 3-hit combo.

This is very apparent in fights of three or more opponents.  Enemies attacking will interrupt your attacks, but you can't really do the same to them.  That's just not fair, and not fun.  Buttons don't always seem to respond to being pushed.  The blocking on the PS Vita version felt more responsive than its PS4 counterpart, but I'm not sure why that is.  Another thing that bugs me is enemy strength.  There are some units that can dish out a lot more damage than others.  Trouble is, they use the same graphic as others.  These units also seem to hang out around death.  When their health is absurdly low (<10%), they just won't die, requiring way to many hits to actually topple. 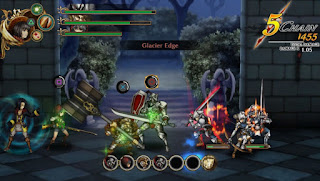 It's totally possible that I'm just not "getting" combat.  Maybe it works beautifully, and it's just not syncing with me.  However, others have had these same problems, so I suspect the combat is in dire need of repair.  It's salvageable, as all you would need is to tweak some settings, making it more balanced, and actually rewarding the player for perfect block skill.

Because of all that, the game can get pretty hard.  It usually seems like a coin toss if a battle will go smoothly, save for some particular hard or boss fights.  At least one fight I had on the Vita version had a ton of lag from on screen effects.  This obviously made it pretty much impossible to perfect block, as the action was jumping all over the place.  This didn't stop the AI from being just fine...just me.  Ugh.  If you lose a normal fight, you have to do the whole battle stage all over again.  If you lose to a boss, you can thankfully re-do the boss fight.  It starts over from whatever position you were in when you started the fight, which might not actually help you at all.  There isn't much you can do to make a hard fight easier, since there are no levels and the gems are random.  All you can do is adjust your strategy, and hope the mechanics don't work against you.

The choice mechanic does give the game replayability, and a run lasts about 10 hours.  It's obviously more when you have to retry battles.  The PS4 version's load times were very short.  The opposite can be said about the Vita version, where battle stage load times were very long.

Fallen Legion has a lot of promise.  The graphics are great, the story is good, and it has replay value.  The choice mechanic could use some work...or a massive flow chart...as could the battles.  As it stands, it's just too skewed toward the enemies to make it fully enjoyable.  It's unique enough that it's worth trying out, but I don't know if I'd recommend sticking with it.


The Good:
Great graphics, two different platforms give two sides to the story.

The SaHD:
Why can't we get some numbers/effects for exemplar stances?

(Review codes for Fallen Legion were provided by the publisher)
Posted by The SAHD Gamer at 1:15:00 PM